The 7UP also adds a fresh, clean lemony-lime flavor to the pound cake that is unforgettably luscious. 7UP Pound Cake is a recipe from a booklet of recipes published by 7UP in 1953 but cooks today find the recipe to be simple and delicious, as well. 7UP Pound Cake Instructions

Pound cake originated in Northern Europe in the early 1700s. It derived its name from the fact that the cake’s ingredients were measured out to one pound each. There were no other leaveners except for the air that was whipped into the batter. These cakes were deliciously dense and bountifully large.

People now use baking soda and baking powder and cut back the recipe to lighten the density and make smaller quantities, but to make pound cake, the 1:1:1:1 ratio must always be maintained. People also add fruit or sour cream, an American favorite, as a way to keep moisture in their pound cake. Many now also add a touch of liquor, like rum, or an extract, like pure vanilla or almond extract.

7UP is the 7UP Pound Cake ingredient used to lighten and flavor it. In 1929, in St. Louis Missouri, Charles Leiper Grigg, the inventor of Whistle (an orange soda), created 7UP, a crisp, fresh lemony-lime soda (pop [in the mountains back east, I have even heard sodas called ‘dopes’]). Originally, 7UP was named ‘Bib-Label Lithiated Lemon-Lime Soda.’

‘Bib-Label’ began the name because the corporation Grigg worked for, the Howdy Corporation, intended to use unlabeled bottles and paper labels, or ‘bibs,’that would be dropped over the top of them to label them, ‘Lithiated’ was next because 7UP contained lithia, also known as lithium, a psychiatric drug now used for controlling bipolar disorder and major depressive disorder.

Lithium salts occur naturally and can be found underground in deposits of clay, mineral ore, and brine. Seawater and geothermal well (water and brines) can also contain lithium. Of course, the rest, well, it ‘is’ lemon-lime soda, after all.

Soon, the same year that the Howdy Corporation became the Seven-Up Company, it shortened the name to ‘7UP Lithiated Lemon Soda.’ In 1936, the name of the drink we all love was changed to simply ‘7UP.’ I drink 7UP quite often anyway, but if I get the least bit sick or nauseated, that is my go-to! It helps me keep hydrated and it helps me to ward off nausea, besides, it is a clean, superbly-tasting soda.

How did 7UP get the name ‘7UP’? People have postulated many theories about the answer to this question, but no one really knows for sure. Maybe he left us wondering on purpose to sell sodas. Where did the spot come from? No one knows that either, only that it came about in the 1970s and that, before that, in early 7UP ads, there were wings on the ‘7UP.’

7UP was marketed mostly to adults in the 1950s. They put it in cocktails and punches, much as they do today. Soon after, they started marketing to children and teenagers. They paired with Walt Disney, and their mascot became an animated rooster named Fresh-Up Freddy. 7UP sponsored Zorro, the kids’ television show and Fresh-Up Freddy would represent 7UP during commercials.

It is named 7UP Pound Cake because the 7UP takes the place of baking soda in the pound cake, causing the dough to rise. The 7UP also adds a fresh, clean lemony-lime flavor to the pound cake that is unforgettably luscious.

7UP Pound Cake is a recipe from a booklet of recipes published by 7UP in 1953 but cooks today find the recipe to be simple and delicious, as well.

Step 1: Heat the oven to 350°F and spray a bundt pan with cooking spray. Lightly dust the pan with flour to help the cake release more easily.

Step 2: In a large bowl, with an electric mixer, mix together the butter and sugar, beating them until they are light and fluffy.

Step 3: Add the eggs one at a time using the mixer to beat well after each addition.

Step 5: Using a separate medium-sized bowl, combine the flour, baking powder, and salt. Whisk these dry ingredients together to combine them.

Step 6: Add one-third of the dry ingredients mixture to the butter and sugar mixture, using the electric mixer on medium speed to thoroughly combine them.

Step 7: Pour the batter into the prepared pan and smooth the top with a rubber spatula.

Step 8: Place the pan in the center of the preheated oven and bake for 60-65 minutes, or until a cake tester inserted in the middle of the cake comes out clean.

Step 9: While you are waiting for the cake to cool, you can create the glaze.

Step 10: When the cake is completely cooled, after about an hour and a half, drizzle the glaze over the top so that it runs down the sides of the cake.

Cut into slices and serve. 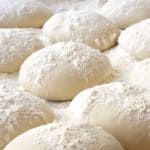 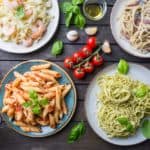