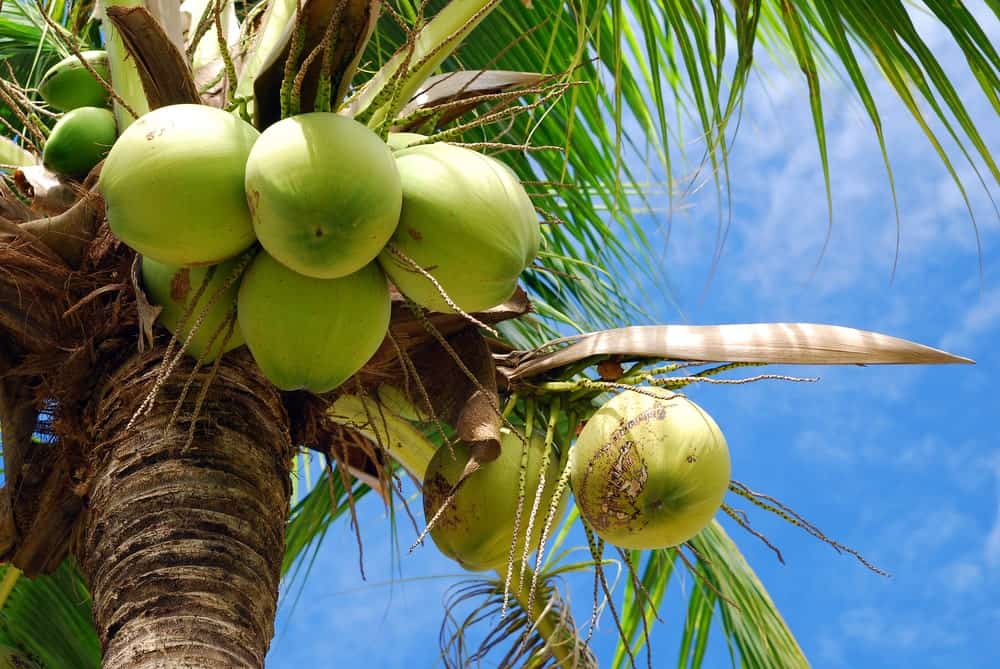 Coconuts remind me of a memorable scene from the 2000 film Castaway, in which Tom Hanks plays a FedEx employee who miraculously survives a plane crash in the South Pacific, but ends up stranded on a deserted island.  He manages to salvage some of the plane’s cargo.  At one point not long after he’s arrived on the wind-swept isle, he starts sorting through packages, desperate to find something to eat or drink.

Suddenly, his search is interrupted by a loud thud nearby.  His eyes follow the sound to a palm tree laden with coconuts, some of which are falling to the ground.  Tentatively, he reaches for one and shakes it, noting there’s liquid inside.  He goes to great lengths to break open the round, fibrous fruit.  After multiple attempts, he victoriously peels open the coconut and drinks greedily of the sweet water inside.

The last several years have seen a renewed interest in coconuts, and they’ve been hailed as a superfood.  Coconuts have been cultivated since ancient times, and the coconut featured in Castaway is just one of several different types.  Here’s a crash course on everything you ever wanted to know about this tropical gem.

History of the Coconut 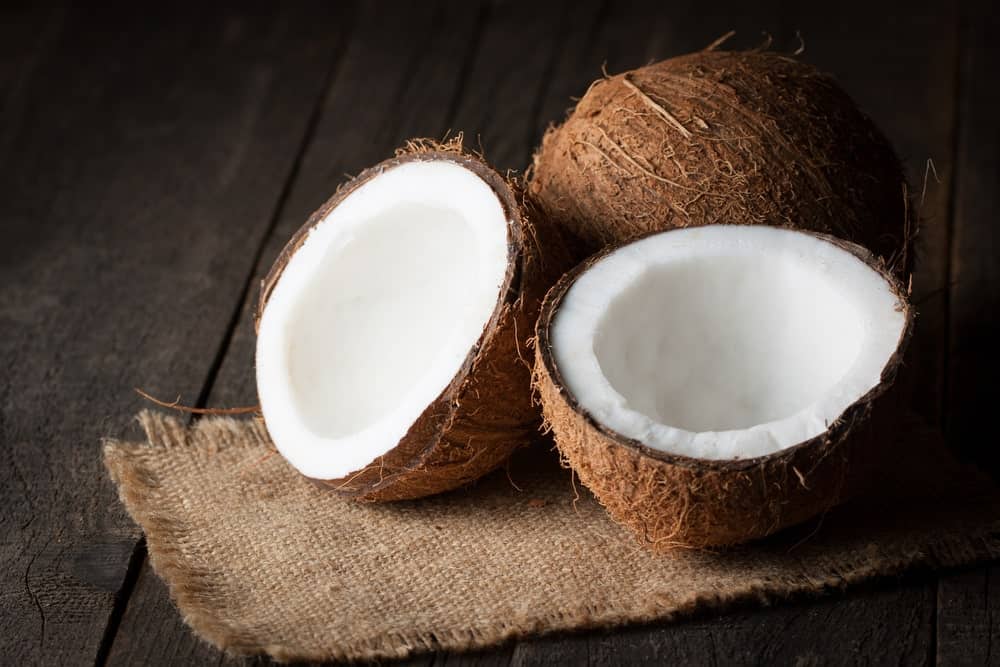 Historically, coconuts were cultivated in two different places — not surprising considering how many sea-going wayfarers stockpiled coconuts among their cargo before setting sail for home.  Most “coconut DNA”  can be traced to either the Pacific Ocean basin or the Indian Ocean basin.

Inhabitants of the Pacific probably began growing coconuts in southeast Asian locales, such as the Philippines, Malaysia, Indonesia, and perhaps also on the mainland of the continent.  Indian Ocean centers of cultivation included Sri Lanka, the Maldives, the Laccadives, and the southern edge of India.

Other varieties of coconut emerged as trade routes across the region expanded.  Hundreds of years later, Europeans brought this tasty fruit to the Americas, and Portuguese explorers introduced it to the people living along Africa’s western coast.  As you might expect, coconuts found in the eastern United States (namely Florida) come primarily from the Indian Ocean, while fruits found on the West Coast originated in the Pacific basin.

Even though they appear frequently in candy and deserts, coconuts have numerous health benefits.  Coconuts contain saturated fats, which, in their unprocessed form, won’t send your cholesterol through the roof.  If you want to cook with coconut oil, look for the unrefined variety.  And here’s another reason to consume the oil; it accelerates the metabolism, helping with weight loss.

If you’re still not convinced that coconut oil is good for you, you might like to know that it has a detoxifying effect, restoring balance to the digestive tract.   Coconuts also have antifungal and antibacterial properties, improve immune system functioning, and they can prevent wrinkles and age spots.

Tom Hanks was onto something when he guzzled coconut water on that lonely island.  Rich in electrolytes, it kept him hydrated and helped his nerves and muscles operate as effectively as possible.

Coconut is not only a superfood, it’s a rejuvenating component in personal care products, too.  It’s a great moisturizer for hair and skin and can help whiten your teeth.  If you like to make DIY products, you can add coconut oil to homemade deodorant and toothpaste.  Just make sure you keep those items away from direct heat, or the oil will melt.

Other Uses for Coconuts

The coconut palm and its tasty fruit are incredibly versatile.  Palm nuts and tree bark can be put to use in a variety of ways.  Historically, tropical islanders took advantage of the bark to build furniture and homes.  Leaves were woven to create thatched roofs.  These practices continue today.  Coconut shells have been fashioned into musical instruments, and the husks split for kindling.  Coconut roots proved an effective ingredient in antiseptic mouthwash, and the fruit makes a good mosquito repellent.

Coconut oil really comes in handy when you need to knock some household chores off your to-do list.  If your kids have decorated your home with their sticker collection and you’re having trouble undoing their handiwork, try rubbing some coconut oil on the adhesive residue.  Let it sit for five minutes, then wipe it away.  It should readily remove all traces of the “evidence.”  Likewise, if you need to remove an errant wad of gum from carpet (or hair), coconut oil should do the trick.

Want to break out that new cast-iron skillet so you can serve up a scrumptious stir fry?  You’ll need to season the pan first.  Slather it generously with coconut oil and place it in a cool oven.  Set the oven to 300°F and once it reaches that temperature, let the skillet “bake” for 30 minutes.

Turn off the heat and allow the pan to cool completely before you take it out of the oven.  It should stay well-seasoned for years to come.  Similarly, rubbing coconut oil on wooden cutting boards restores their shine and kills built-up bacteria.

Speaking of wood, you can use the oil as an all-natural furniture polish.  Coconut oil is also great for buffing the scuffs out of leather.  Wipe the surface with a damp cloth first, then use a dry one to apply the oil in a circular motion.  Let it sit for 15 minutes, then wipe it away.  Got grease stains?  Mix up some coconut oil and baking soda and work it into the spot.

Coconut oil is a helpful remedy for soap scum, too.  A paste of baking soda and coconut oil applied to the bathtub and left there for 15 minutes can work wonders.

Melt one tablespoon of coconut oil over low heat.  Add 1 cup of flour, 1/2 cup of salt, 1 cup water, 2 teaspoons cream of tartar, and any kind of gel food coloring you want.  Stir your concoction until it forms a ball, then turn off the heat and let it completely cool before letting the kids have at it.

While coconuts originate primarily from two different places, there are several different types.  Coconuts fall into either the “tall” or “dwarf” category.  Tall coconut palms are especially widespread and can live as long as humans — 80-90 years.  They reach an average height of nearly 50-60 feet and are capable of growing at altitudes up to 3,000 feet above sea level.

Tall palms thrive in a variety of soils, from cloddy red clay to tropical isle sand.  Plus, they are highly pest- and disease-resistant.  They reproduce through cross-pollination, yielding medium to large-sized fruit in reds, yellows, greens, and oranges.

Dwarf coconut trees have a shorter lifespan — 40-50 years — than their tall counterparts, and typically reach a height of 20-60 feet.  Dwarf palms bear fruit earlier than tall varieties, too. Coconuts from dwarf palms are round and usually only weigh about 3 ounces.  Most dwarf trees self-pollinate, producing more fruit than taller types.  These trees, which are highly vulnerable to drought, yield orange, yellow, and green nuts.

The coconut palm (Cocos nucifera) is the only palm capable of yielding the rich fruit.  Its subgroups vary in terms of fruit taste, color, and genetic characteristics.  Here are its primary subtypes. 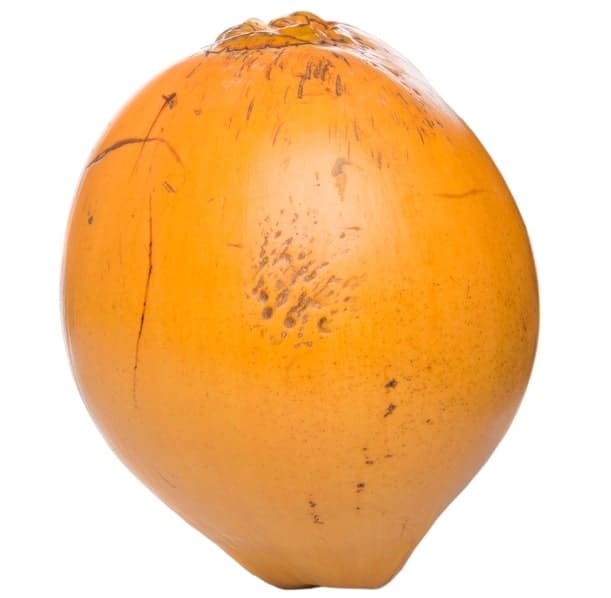 These hybrid palms produce impressive yields.  They flourish in tropical areas, as long as they are rooted in free-draining soils and a healthy dose of deep organic mulch.  First introduced in Malaysia between 1890-1900 by Indonesian planters, Malayan yellow dwarf coconuts are believed to be the most prevalent dwarf coconut worldwide. 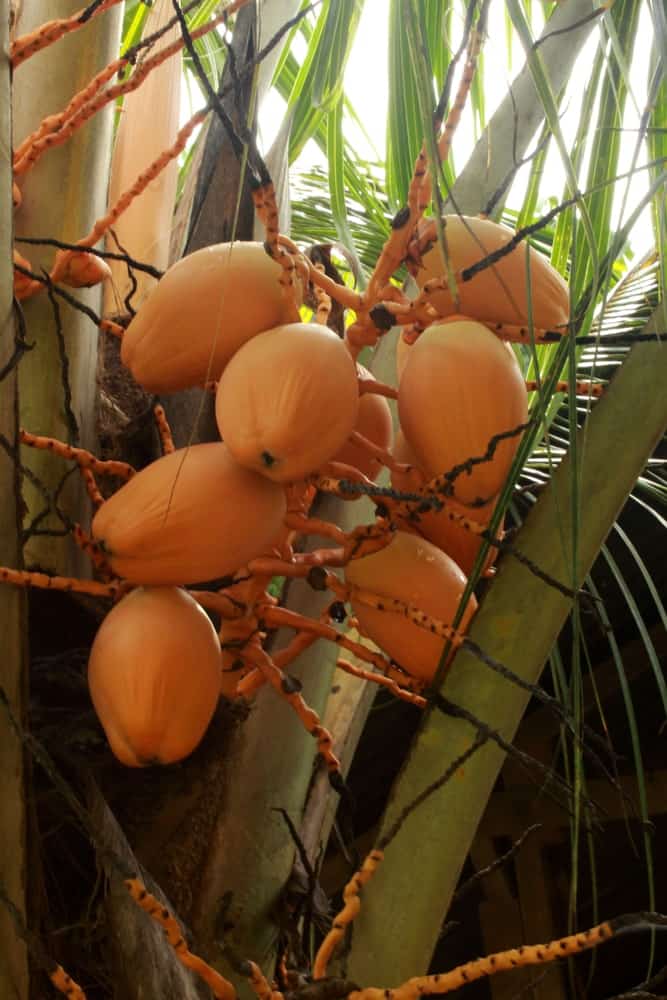 Dwarf orange coconut palms extend up to around 16.5 feet and live about 40 years.  They take about 3-4 years to start flowering and produce round, reddish-yellow colored nuts.  These self-pollinating trees can yield more than 60 highly dense coconuts a year, and the water contained within the fruits is exceptionally sweet. 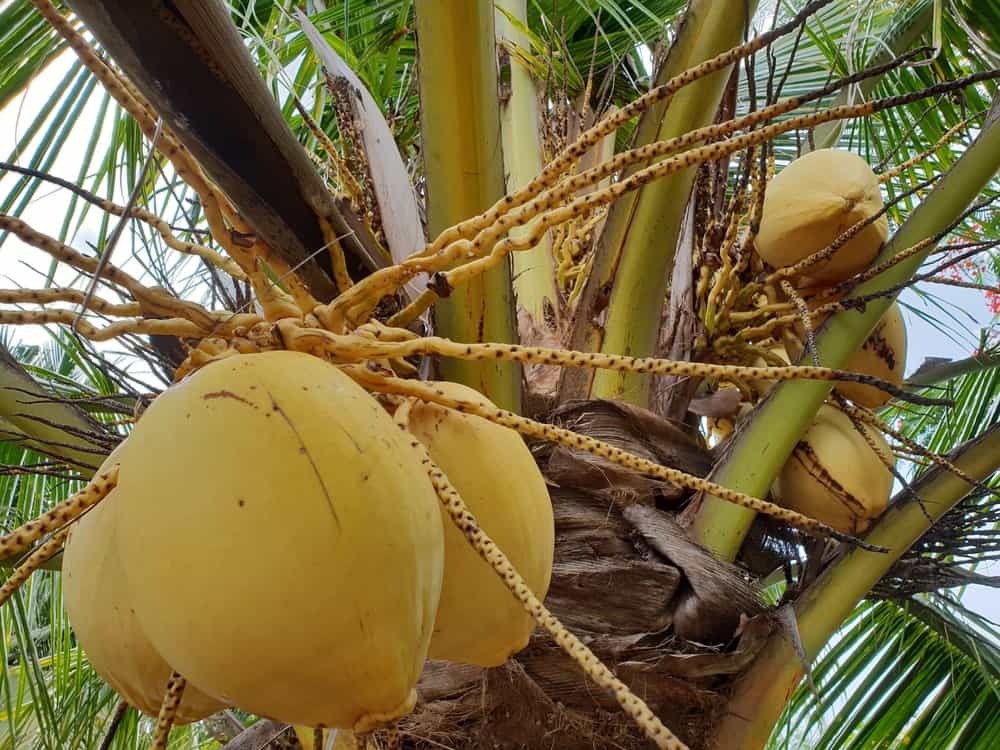 Imported from Indonesia, this coconut palm is cultivated primarily in Bulgaria.  It can be grown outside the tropics as long as its roots are protected from cold temperatures.  These trees yield fruit that transitions from brown or orange to bronze or red as it matures.

On average, golden Malay coconut trees attain a height of more than 39 feet and span a width of 26-39 feet.  They bloom at an early age.  The meat of the coconut is often used for cooking, and its water makes an excellent drink. 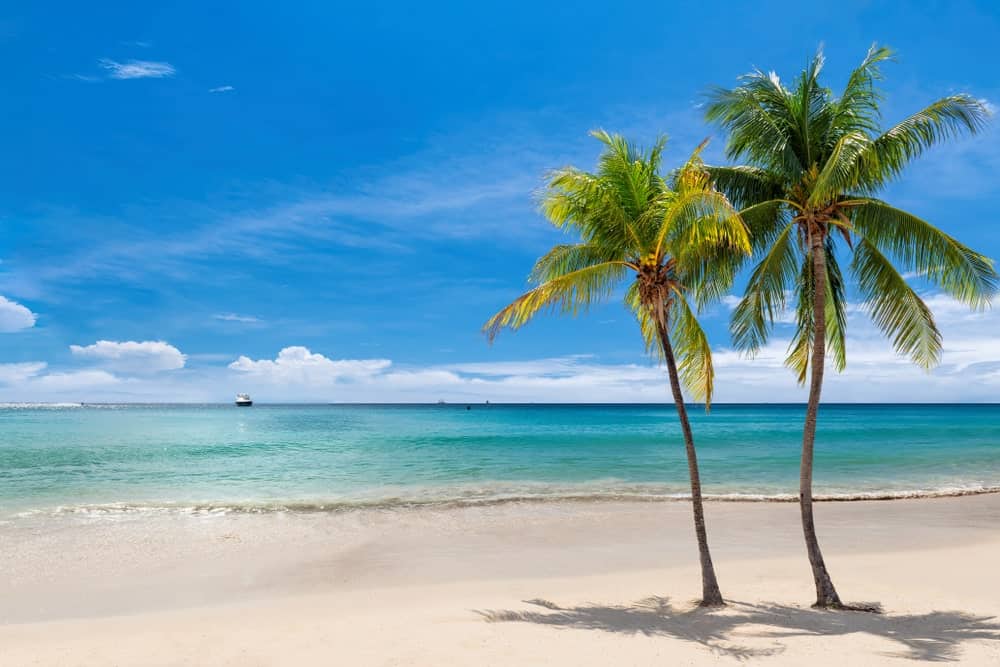 Hailing from Jamaica, this hybrid is often called the “sturdy coconut” because it can withstand adverse conditions and is not susceptible to lethal yellowing, a disease that ravages several palm species.  These grow best in temperatures above 40°F and usually reach a height of nearly 60 feet. 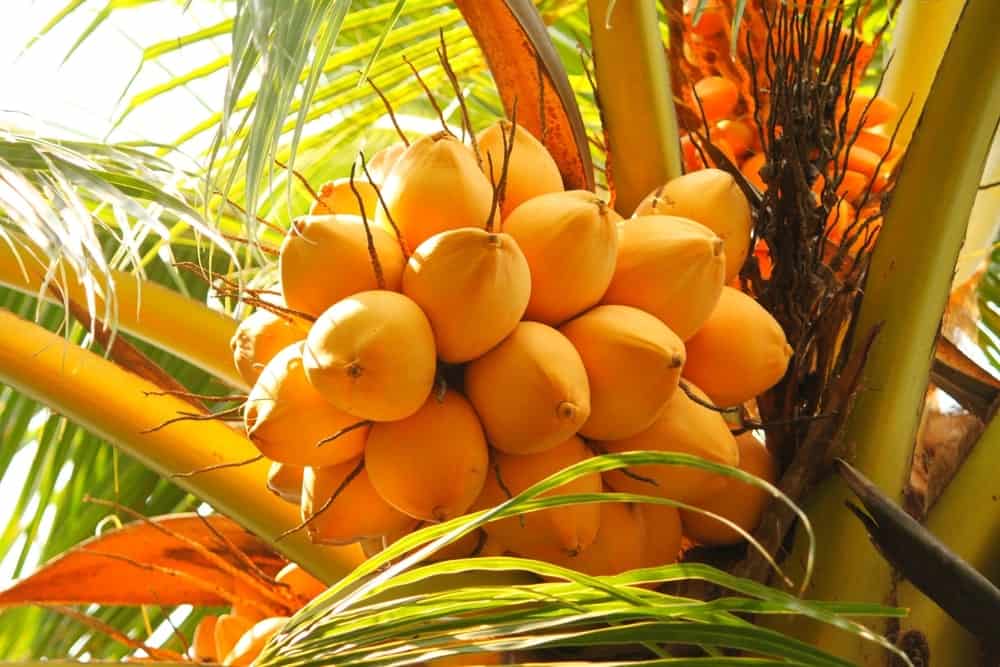 Native to Sri Lanka and part of India, these trees produce football-shaped nuts that grow in clusters.  The palms reach a height of about 66 feet, while the fruits are bright orange.  King coconut trees yield fruit all year round.  Nuts can be harvested after 7-8 months, and their milk is especially sweet and refreshing to drink.

Highly-nutritious, these coconuts are rich in sodium, vitamins, amino acids, phosphate, and chloride.  They contain more potassium than a banana, and their water is higher in Vitamin C than an orange.  These fruits contain an enzyme that aids with metabolism and digestion, too. 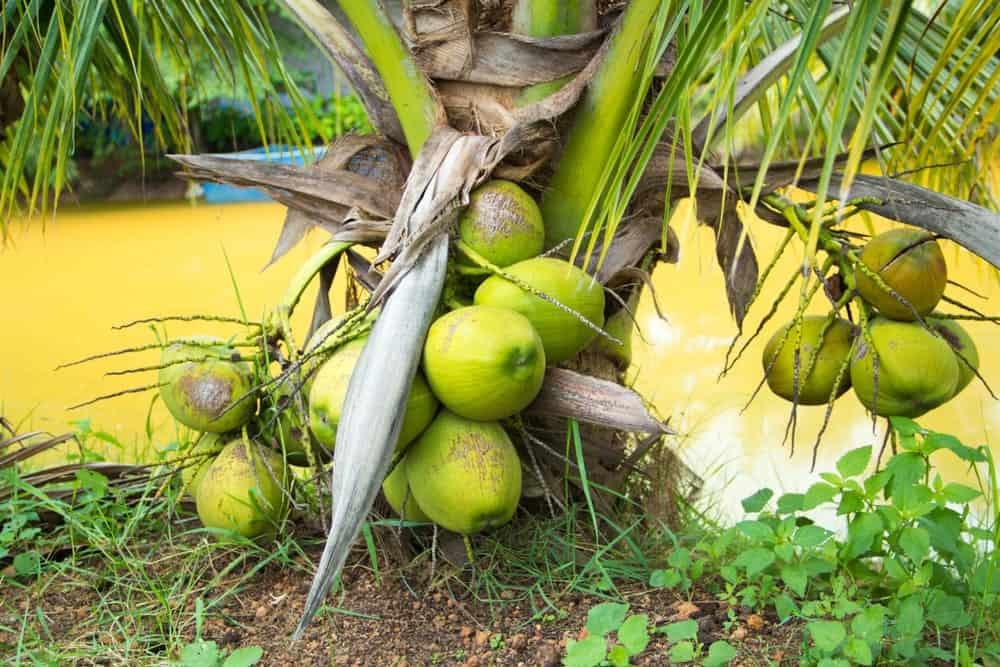 Frequently described as “one tough nut”, Fiji Dwarves are highly disease-resistant and rank second among coconuts in terms of genetic diversity.  They have a unique leaf structure that makes them appear especially lush, so they’re an excellent aesthetic addition to the landscape. 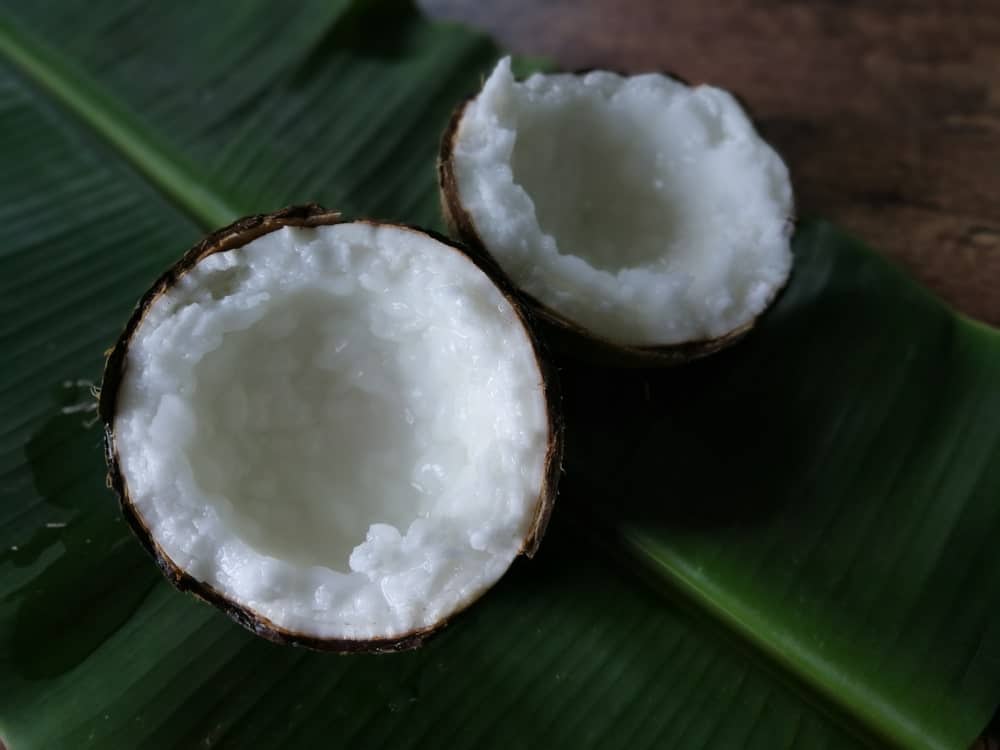 Also called the “kopyor coconut,” this off-the-grid fruit is a hybrid mutant.  An endosperm defect leads to a malnourished embryo, also referred to as a collapsed embryo.  Consequently, the tree produces fruit that has a gelatinous shell, soft, jelly-like flesh, and almost no water.

It’s still high in nutrients, though.  Although it’s not widely grown, this palm has earned itself a reputation as a sweet treat throughout Asia, where it’s considered a delicacy and is a key ingredient in many desserts. 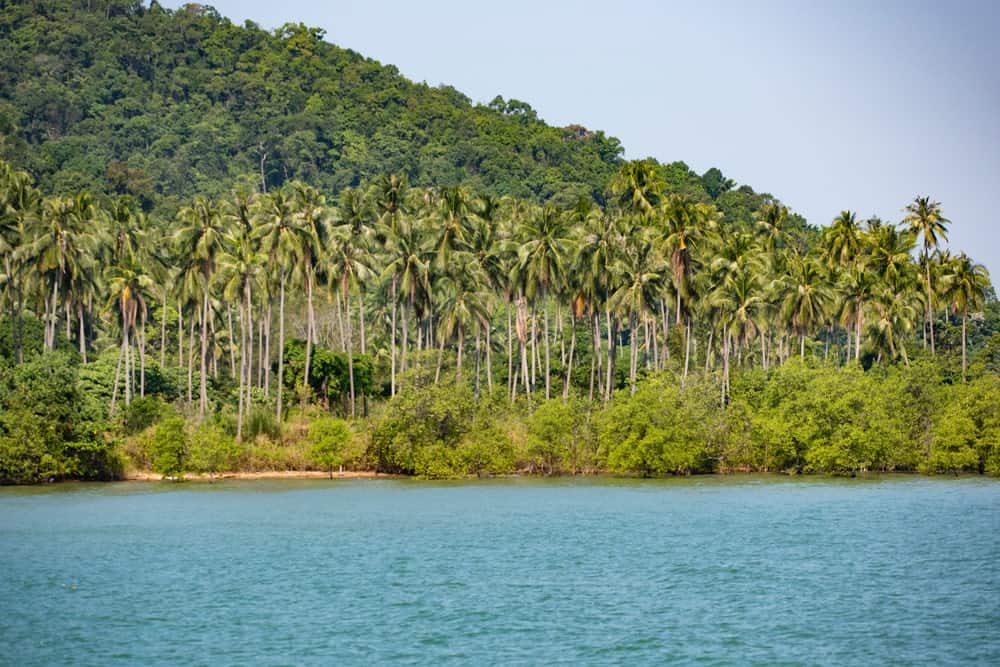 Taking 6-8 years to bear fruit, east coast tall palms produce about 70 coconuts every year.  The fruits are comprised of 64% oil.  These trees do especially well in well-drained sandy soils or red loamy dirt.  One thing these trees have going for them is that they have a moderate ability to tolerate major pest infestations. 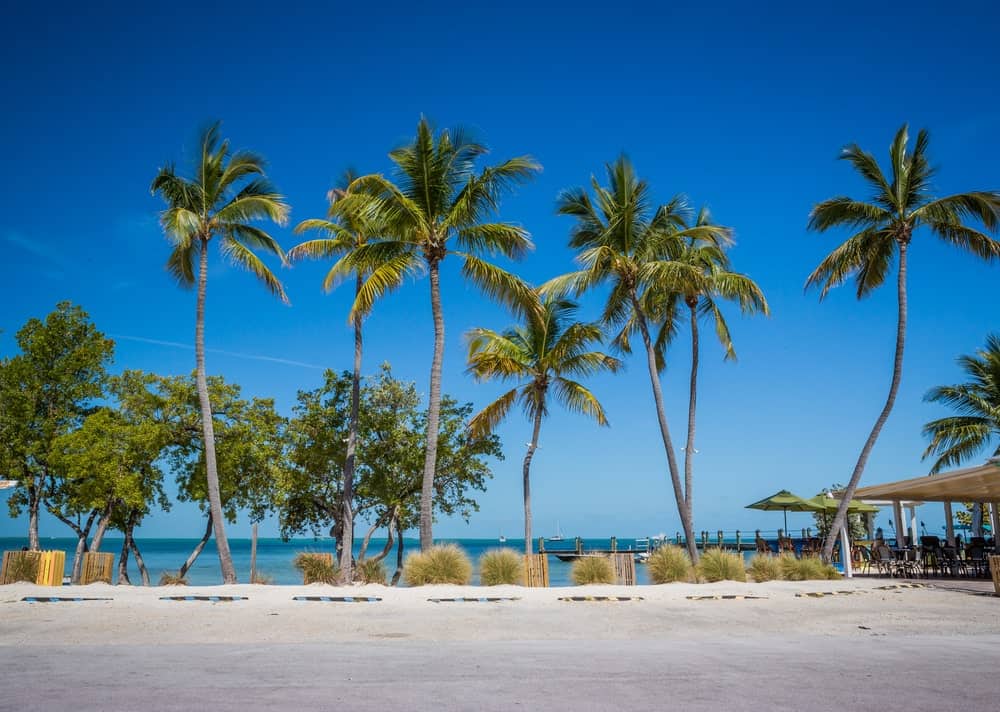 These do well in all soil types, especially those that tolerate considerable moisture.  West coast tall trees yield about 80 nuts or palms annually.  They take 6-7 years to bear fruit.  The water of the fruit makes a sweet, tasty juice when you want a refreshing drink.

So if you ever end up on a deserted island like our Castaway, at least you’ll know what kind of coconuts you’re co-existing with. 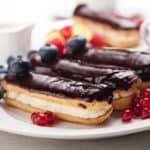