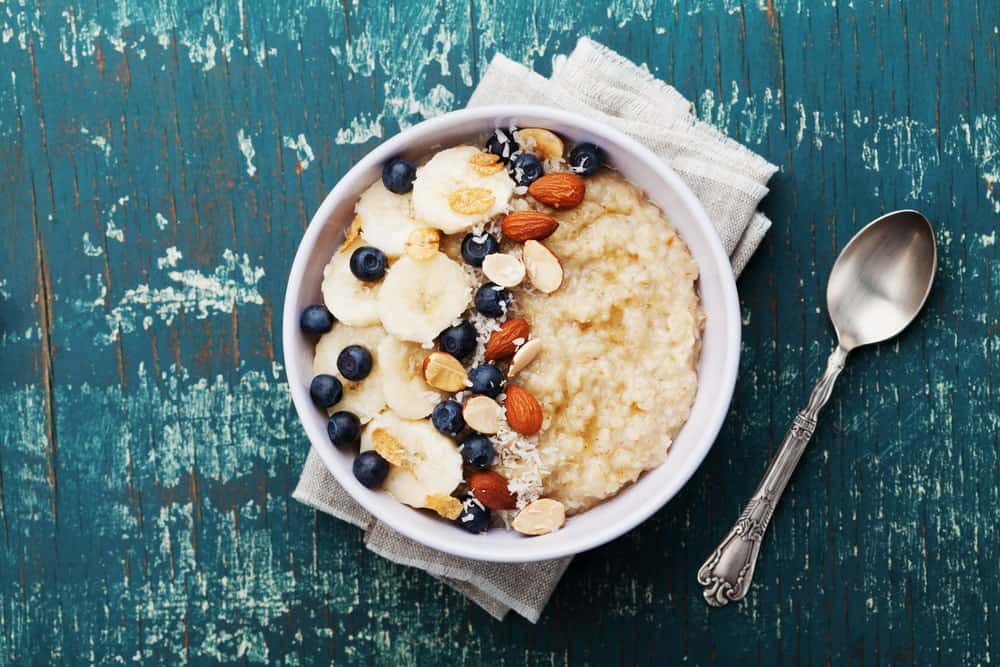 Many people, when they think of porridge, see it in the shadows in the very back of a bottom shelf of the refrigerator – you know, “nine days old.” I grew up with this bowl of heaven only knows what in my head. I still don’t like peas, but porridge is a very different story. I adore porridge.

Porridge is a cereal, usually made from grains, that is served hot. However, it can be made with simmered vegetables or legumes. Porridge is most often served at the mushy stage after it has been boiled down with water or milk.

Where Did Porridge Originate? 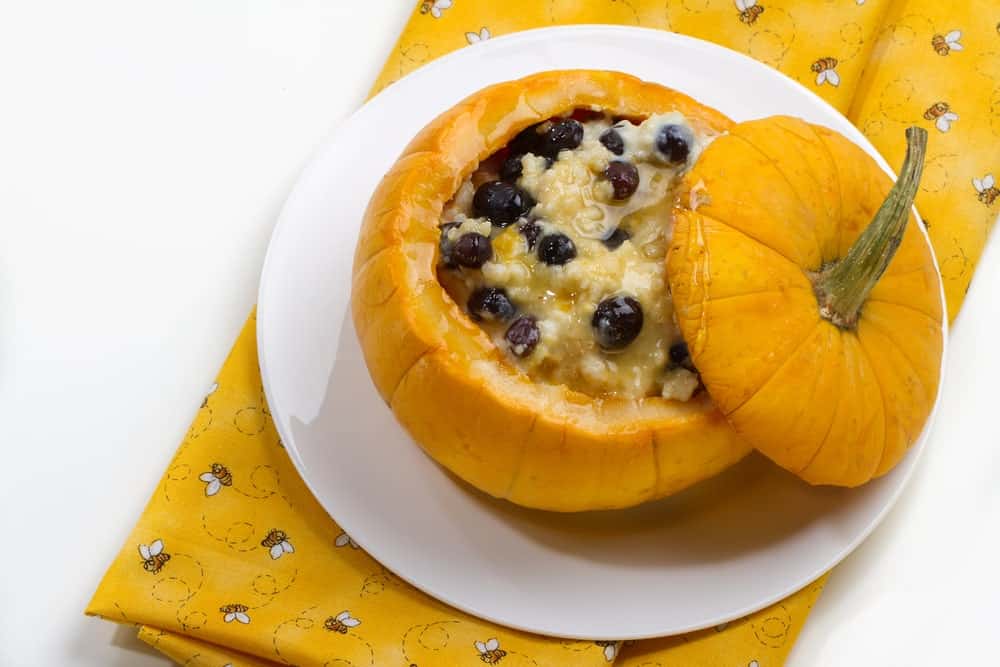 In the 17th century, the word “porridge” was used for the first time. It’s origin traces back to a French variation of the word ‘potage’ (a name for soup); the expression is ‘pottage.’ The word “potage” can be traced back to a word referring to a saucepan; we know it as a ‘pot.’ Porridge ‘in a pot’ was cooked long before the 17th century though.

The belief now by scientists is that people cooked grains into porridge back as far as 10,000 BC. As mankind developed into what it is today, so did porridge develop. Some have cooked it down further into an extremely thick consistency and used it to make baked flat cakes, or they have made it into bricks and cooked it on hot stones or a fire’s embers.

Why Should I Eat Porridge? 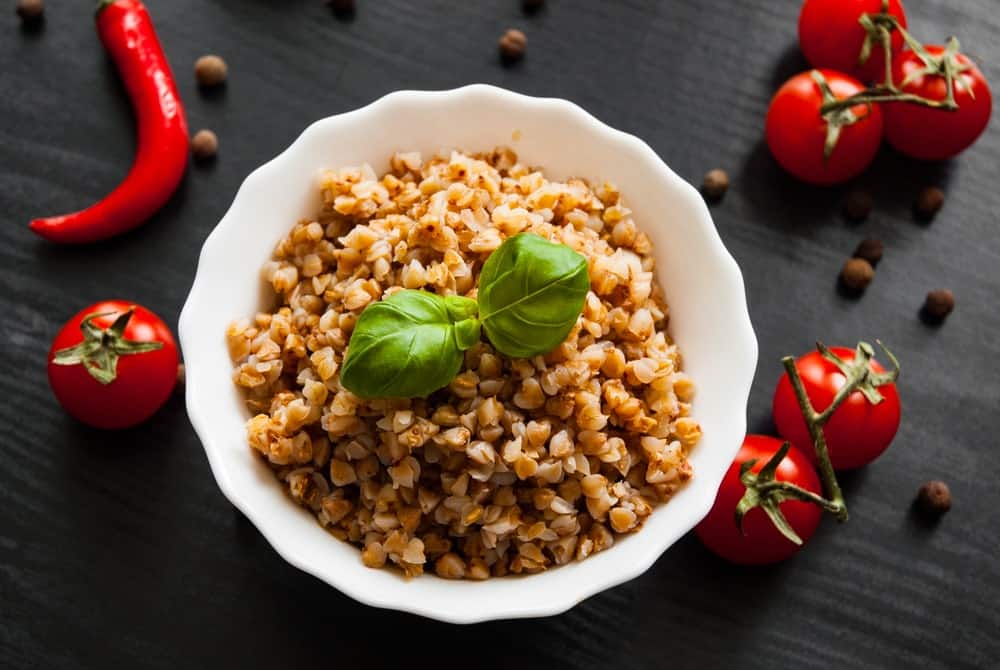 Depending on what type of porridge you eat, the benefits of porridge can be great. There are porridges made with oatmeal, rice, corn, barley, wheat, buckwheat, wheat germ, and many more ingredients. To reiterate, you can also simmer down vegetables or legumes to make porridge, but a lot of porridge is a combination of the two. Here are some of the benefits of eating porridge.

What Are the Different Types of Porridge?

Based in colonial New England, hasty pudding started off as a grain-based dessert in Europe. It eventually became an American staple. Hasty pudding is cornmeal or wheat flour cooked with milk or water into porridge. In the United States, it is not uncommon for it to be made with ground Italian corn.

Original hasty pudding was quite rustic-looking. Modern recipes, however, add some ice cream or whipped cream. Hasty pudding is also commonly known as Indian pudding, the main difference being that Indian pudding is served with molasses and is seasoned with nutmeg and ginger. 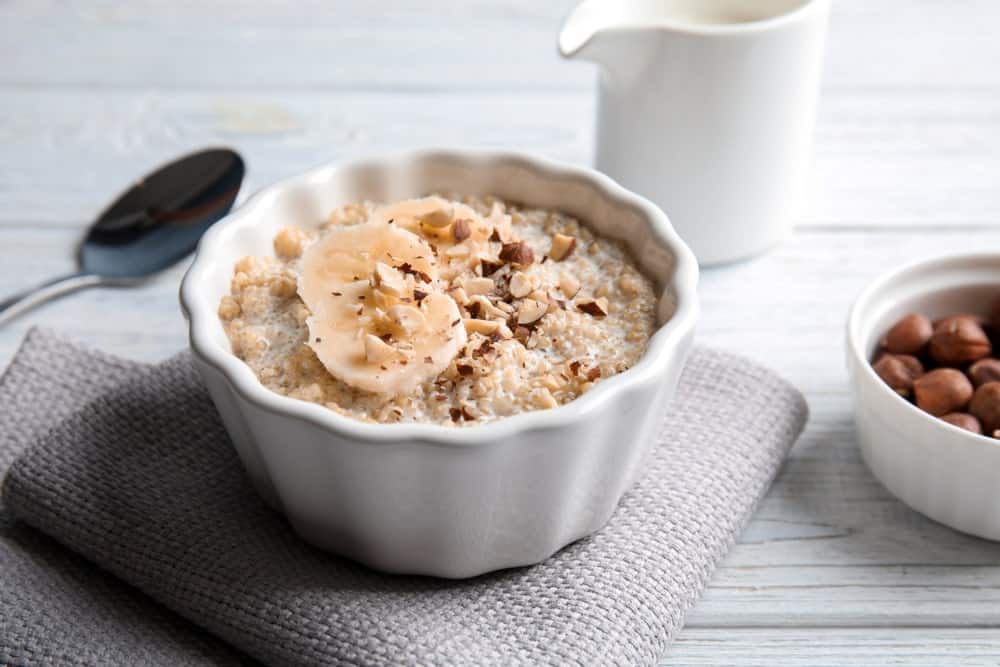 The Incas called quinoa the “mother of all grains.” Today, we call quinoa a “superfood,” because of its rarity as a plant protein source for vegetarians and vegans. There is a plant, kind of like a weed, called a goosefoot. Quinoa is the seed from a goosefoot. Goosefoot plants are akin to spinach and beets.

You can buy whole grain quinoa, quinoa flakes, or quinoa flour. Remember to rinse the quinoa before you cook it. This is to get rid of the outer coating, which can leave a bad taste, soapy and bitter, in your mouth. Quinoa has a fluffy, chewy texture and a creamy, nutty taste. Often it’s served with olive oil, fresh garlic, spinach or arugula, fresh herbs, spices, and more. 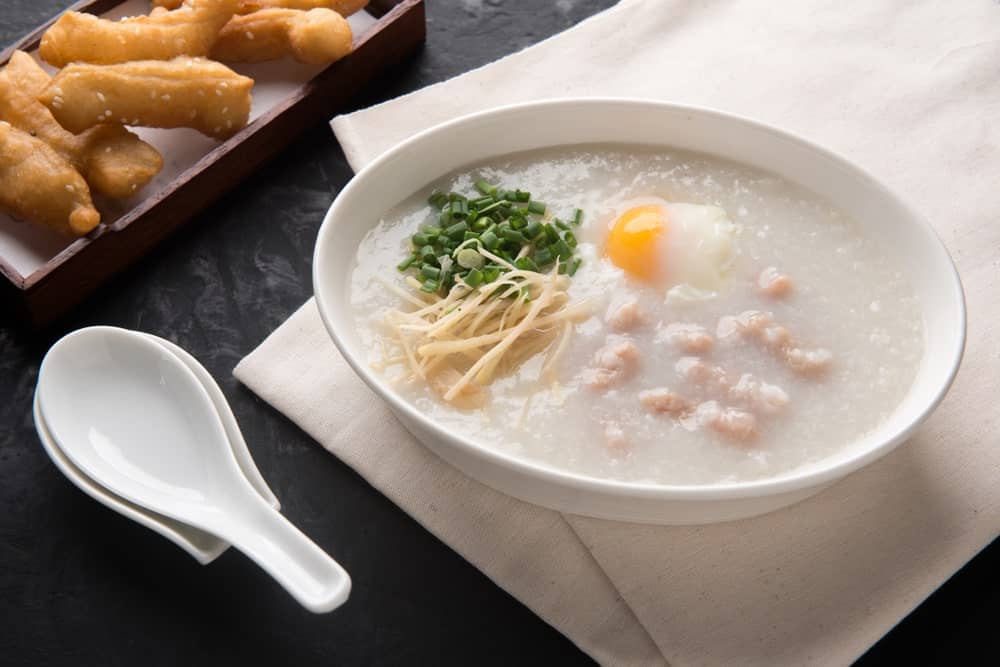 For over 4,500 years, the Chinese have been making rice porridge, and that is what congee is. Popular not just in China but in most of Asia, congee is most often served for breakfast, but for some, it makes a satisfying lunch or supper served with some vegetables or meat.

Commonly known as Khao tom moo, jook, or rice gruel, it is made by boiling down rice grains in water until they break down. The Chinese serve it with salted duck eggs, dace paste, pickled tofu, lettuce, and bamboo shoots. 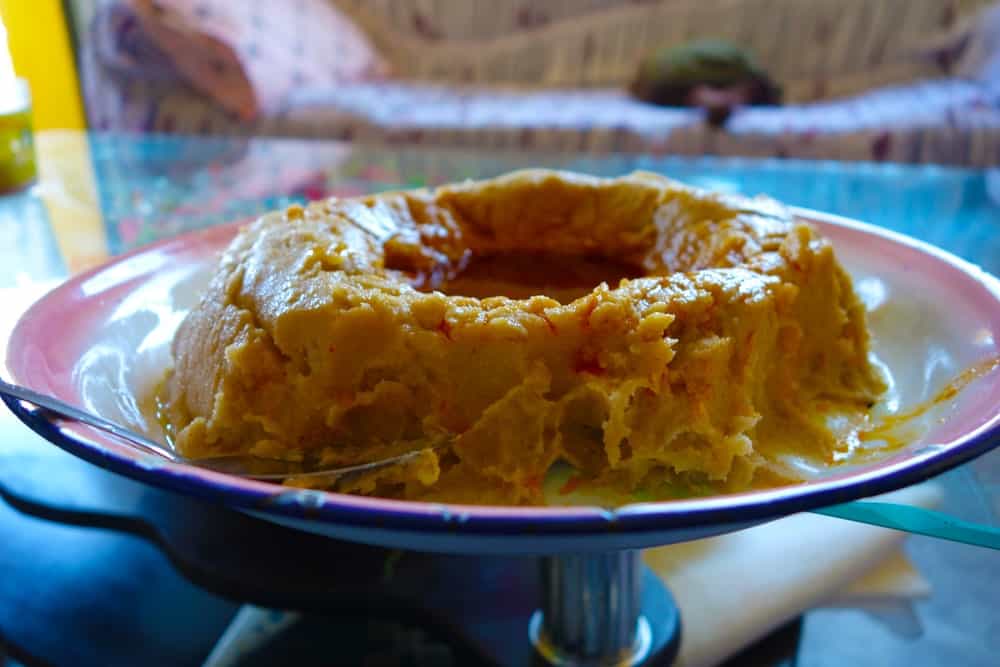 Also known as ga’at, genfo is made from mixed legumes and different grains, like maize, millet, barley, Ethiopian oats, soybeans, yellow peas, wheat, chickpeas, and sorghum. Most commonly eaten as a breakfast staple in Ethiopia, it is often eaten with yogurt or a spiced butter called ‘kibe.’

Genfo is much stiffer than most porridge. It is usually cooked with water and served in a stiff mound with a hole in the middle. That hole is filled with butter that’s been seasoned with spices like fenugreek, cardamom, cinnamon, turmeric, cumin, and coriander and simmered. Some use spices like garlic, ginger, basil, and chili peppers. It is eaten by pulling off a piece of the stiff porridge and dipping it in the seasoned butter. 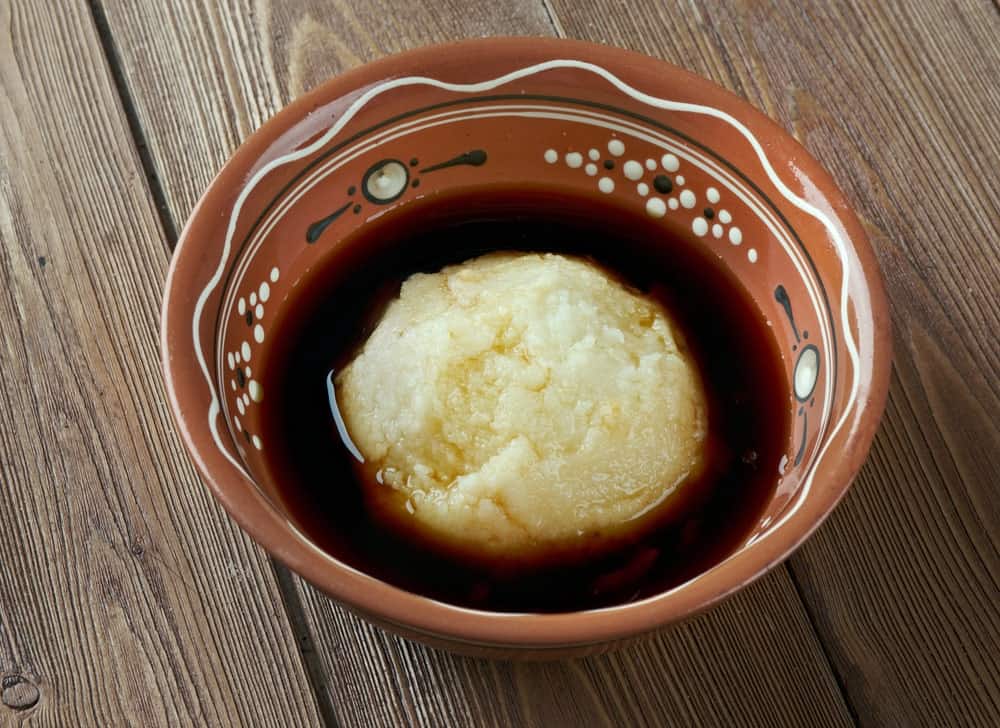 Like genfo but made with flour, asida is eaten is North African and Arab countries. 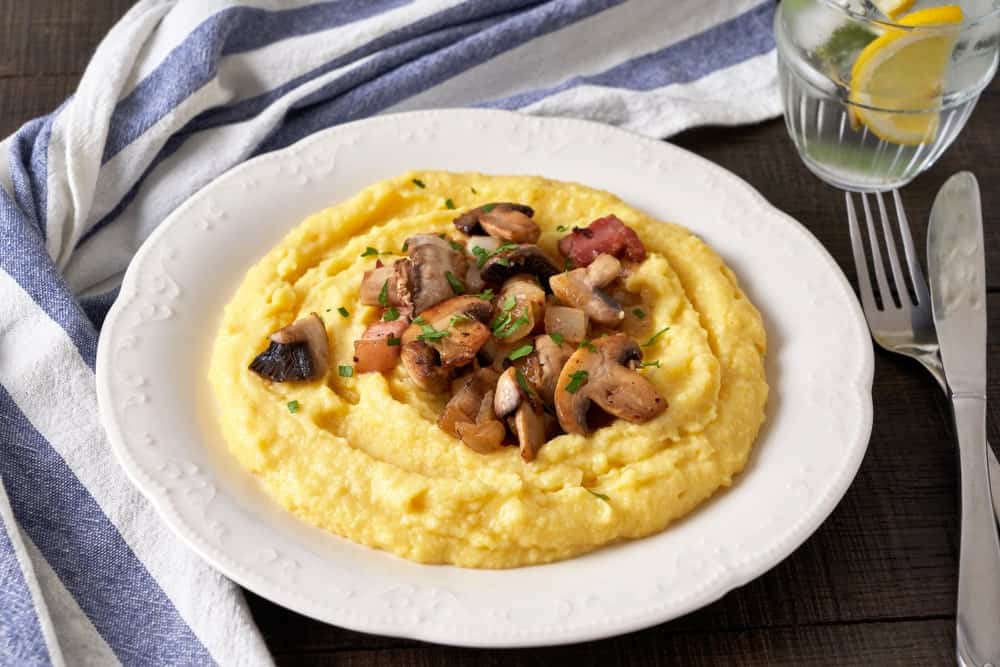 Originating in Italy, polenta is made with ground cornmeal. In rural Italy, it was referred to as polenta soup or corn porridge. Most commonly served as a hot porridge, polenta sometimes is further thickened, made into a loaf, and baked, grilled, or fried. When cooking polenta, you use butter, cream, milk, or water, but what’s vital is that you always cook it very slowly on low and tend it well.

In Italy, flint corn with its very coarse texture is ground into the cornmeal that is then used to make polenta. It was eaten for just about every meal by Italian farmers for a long time, quite often paired with cheese. Polenta with cheese is a classic combination. 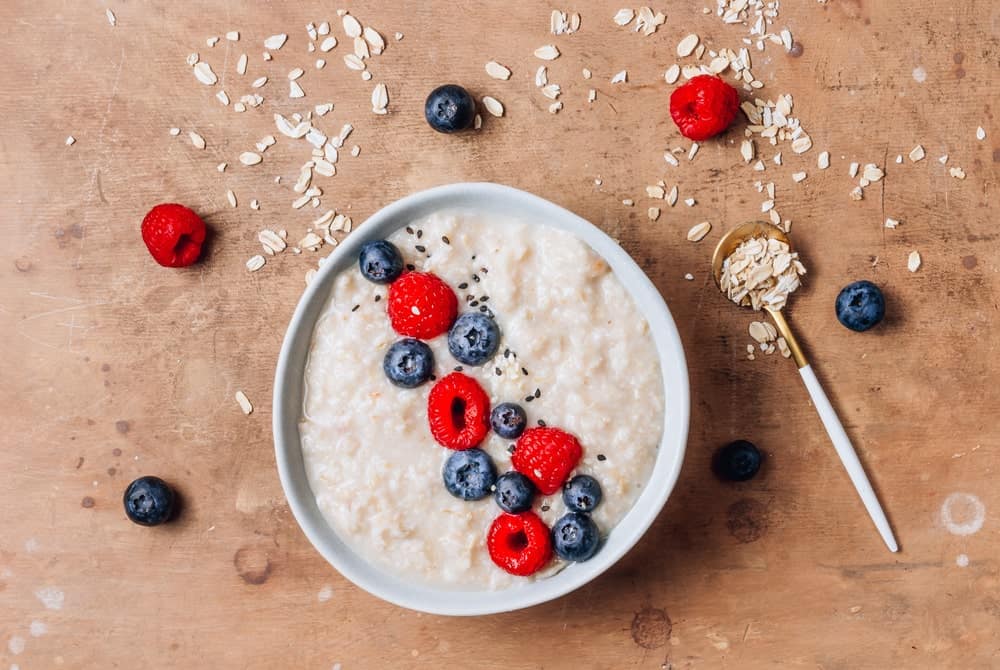 People often use the terms ‘oatmeal’ and ‘porridge’ interchangeably, but it is incorrect to do so. Oatmeal is porridge, but not all porridge is oatmeal.

Oatmeal, largely because scientists have discovered that it has so many health benefits, but also because it’s filling and just plain tastes good, is becoming one of the most popular porridges around the world. There are several types of oats that people eat, like instant, quick, old-fashioned, and Scottish oatmeal, oat groats, oat bran, and steel-cut oats.

Oat groats take at least an hour to cook, and steel-cut oats take 25-30 minutes. Quick oats cook in 5-7 minutes and instant oatmeal in 2-3 minutes. The less processed your oats, the better they are for you. You cook oatmeal-like any other porridge, simmered down with milk or water, and oatmeal usually gets a pinch of salt.

Oatmeal is traditionally topped with maple syrup, brown sugar, honey, raisins, dates, dried cherries, nuts, fresh bananas, fresh peaches, and much more. You can top oatmeal with whatever you like. It is usually a sweet porridge served for breakfast, but not in all cultures. In some places, it is cooked in vegetable broth and mixed with carrots, potatoes, greens, and peas.

I like mine sweet, most often with fresh bananas, dried cherries, dark brown sugar, half and half, real butter, chopped pecans. Oatmeal and grits are my two favorite types of porridge. 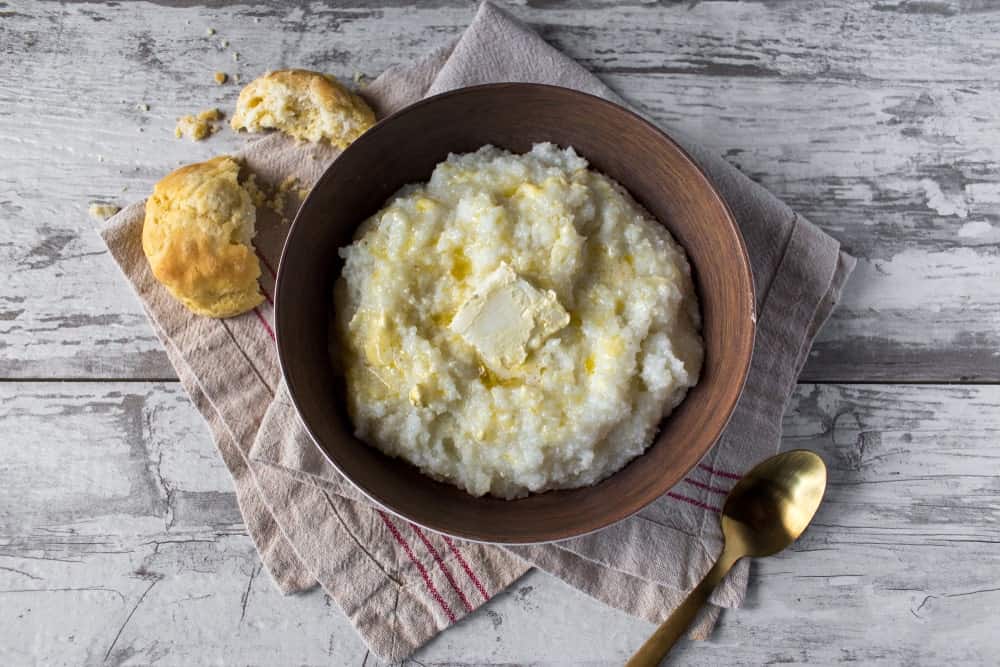 Of Native American origin, grits are made from ground corn. It is quite a popular breakfast dish in the Southern United States. Very much like polenta, grits are now served on many menus as an entrée or most often as a ‘shrimp and grits’ main course.  To make grits, you take maize in the form of hominy corn or white corn and you dry and grind it.

You cook it like other types of porridge. Some people like it sweet, but most often it is eaten with salt, butter, and often cheese. I like mine thick with salt and butter, sometimes with American cheese. Being from the Southeastern United States, I cannot help but love grits. 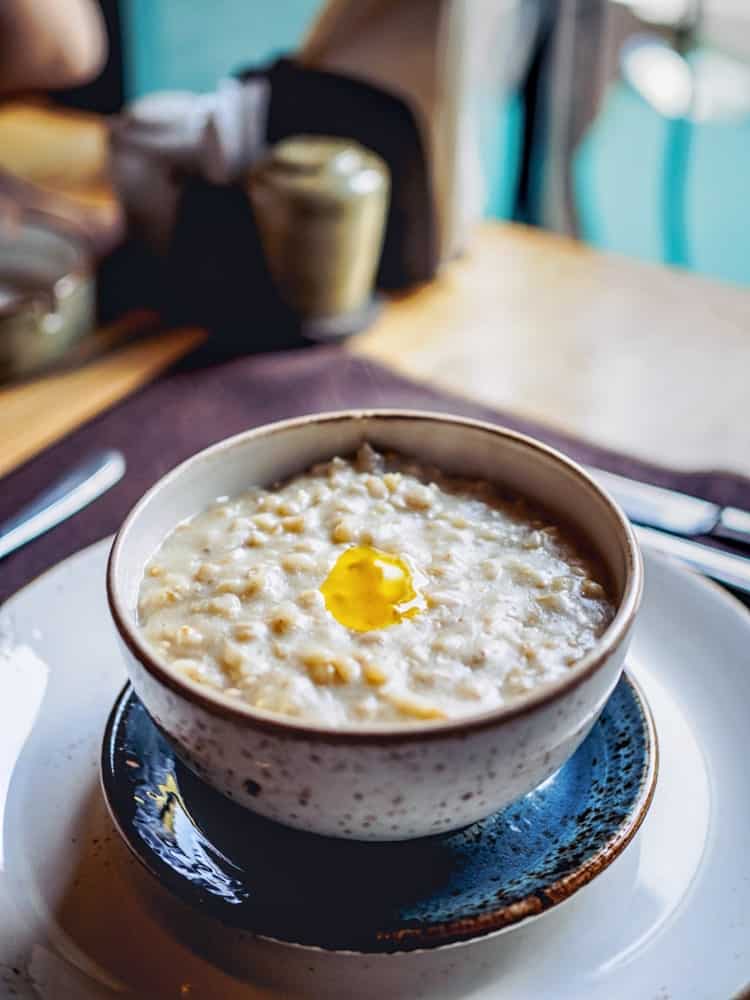 Originating in the Ararat plain, harissa is a very well-known Armenian porridge made from ‘korkot’, which is roasted, cracked, or dried wheat. Fat-rich meat, like lamb or chicken, is used in traditional harissa. The basic preparation for harissa is to soak the wheat overnight and then cook it with butter, seasonings, and meat. In Armenia, harissa is made on Easter and religious days, but on these days, various herbs are substituted for the meat. 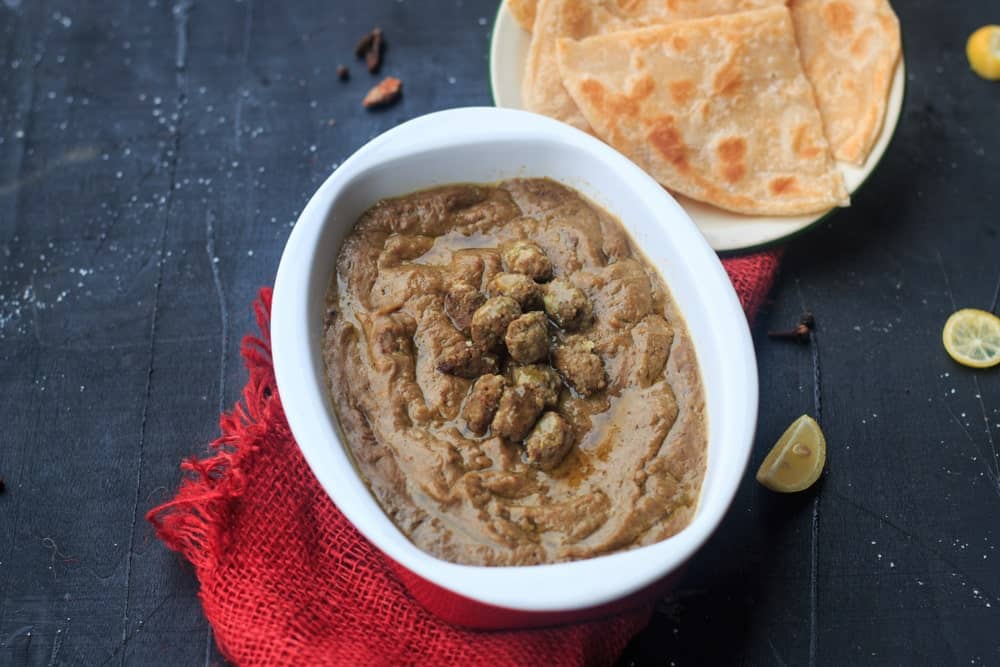 Made from the same type of wheat as harissa is the Arabic harees. It is cooked to between the consistency of porridge and a dumpling. In the Arab states of the Persian Gulf, Harees is extremely popular. 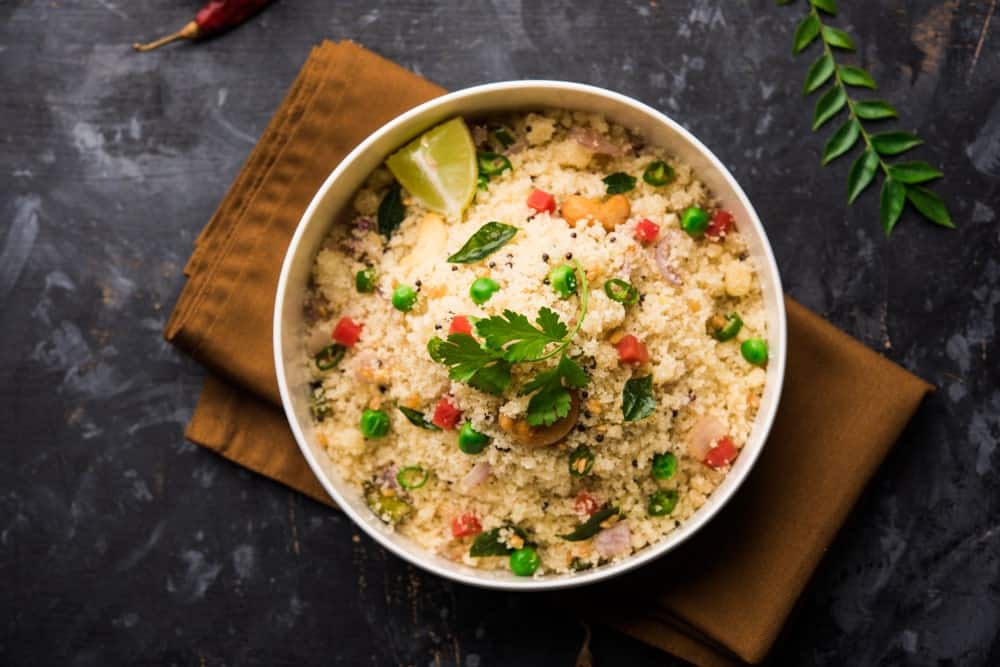 Made from sooji, which is granulated wheat or semolina, upma is a traditional Indian breakfast. The thing to remember about upma is that you should roast the sooji before you begin to make your porridge.  Coconut chutney or a lemon pickle, and filter coffee are often ingredients in rava upma. You can add mustard seeds, cumin, peas, carrots, cauliflower, green chili peppers, onions, curry leaves, tomatoes, lime juice, ginger, turmeric, cashews, coriander, hot lemon slices, and more. 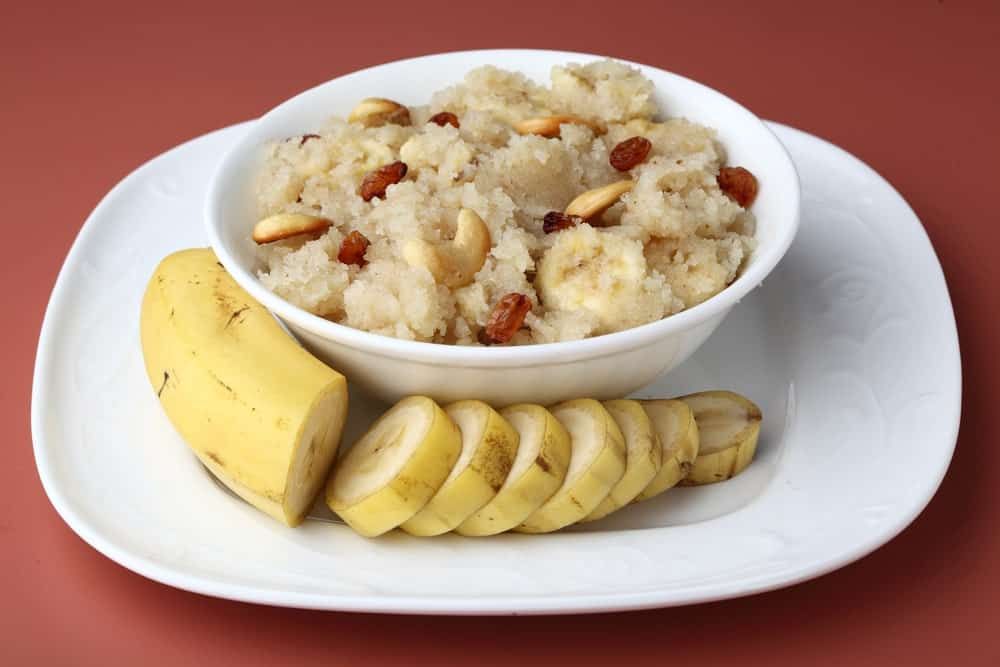 Made just like upma, the difference is that upma is savory and sooji halwa is sweet with sugar. 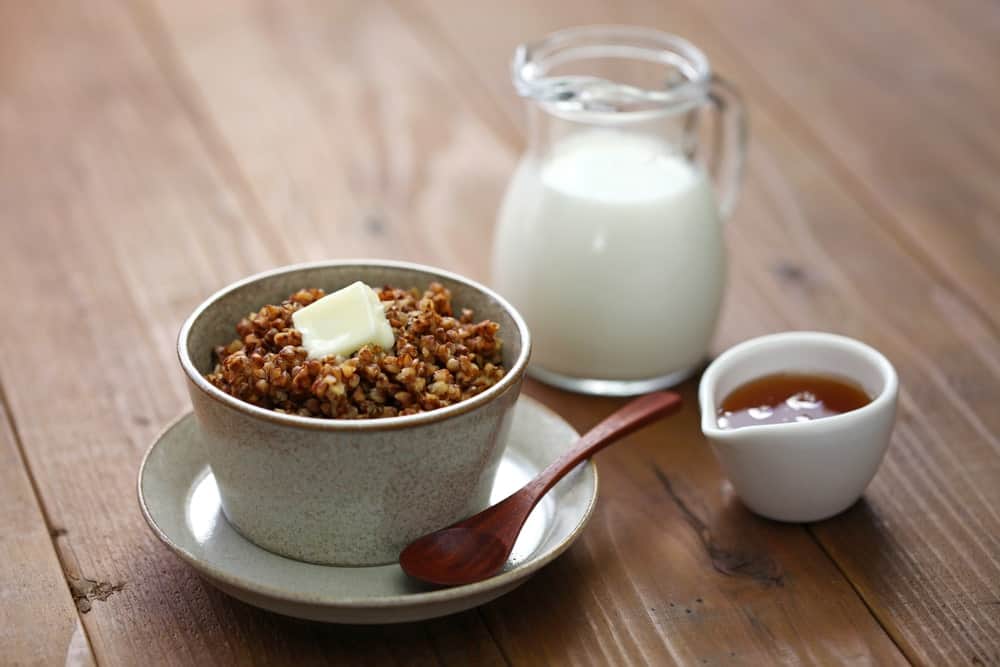 Kasha is made from buckwheat groats that have been roasted, soaked, and simmered until they are soft. The strong, nutty flavors of the kasha are enhanced by roasting it. Kasha is popular in Eastern Europe. A traditional Jewish preparation is kasha varnishkes combining cooked kasha with bowtie pasta and onions.

People in many parts of the world think of kasha as any whole grain, like millet, oats, wheat, or barley, but in America, we think of kasha as only buckwheat groats. Kasha only takes less than 8 minutes to cook. It takes less water than most “grains” do to cook. Kasha is a gluten-free food. 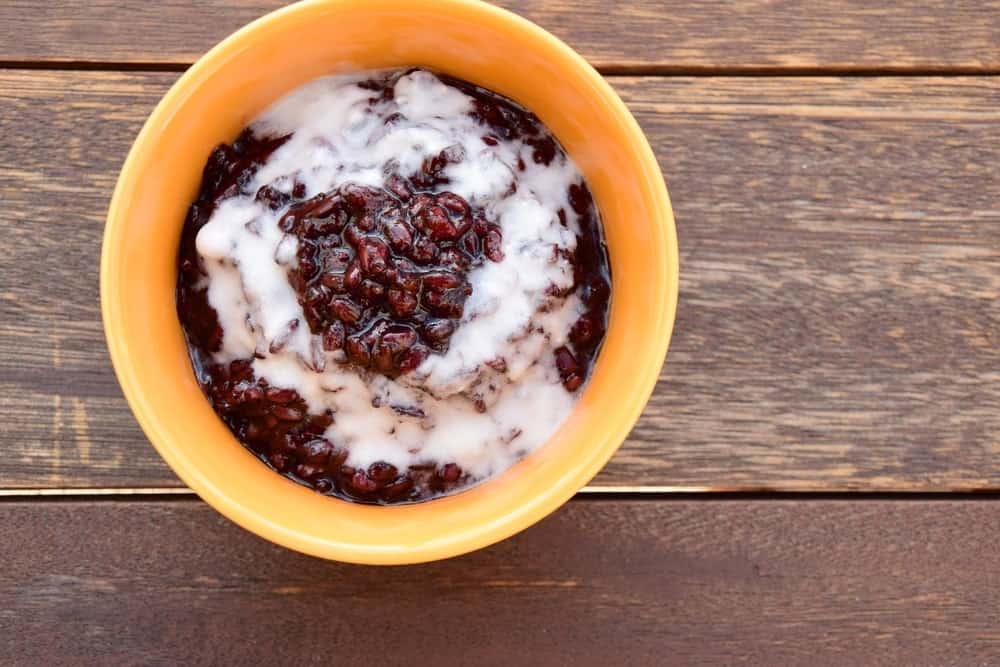 Bubur ketan hitam is an Indonesian porridge made with black glutinous rice, coconut milk, and palm or cane sugar. It is eaten at all times of the day in Indonesia but is most popular as a sweet breakfast.

There are many other types of porridge and countless porridge recipes. Porridge is a staple and warm comfort to so many in the world. Whether savory or sweet, in a bowl or sliced from a loaf, for a stick-to-your-ribs breakfast, lunch, or supper, introduce yourself or your family a new type of porridge today. Don’t you think it’s time you started broadening your porridge horizons? 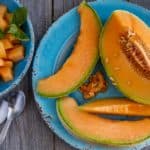 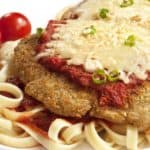