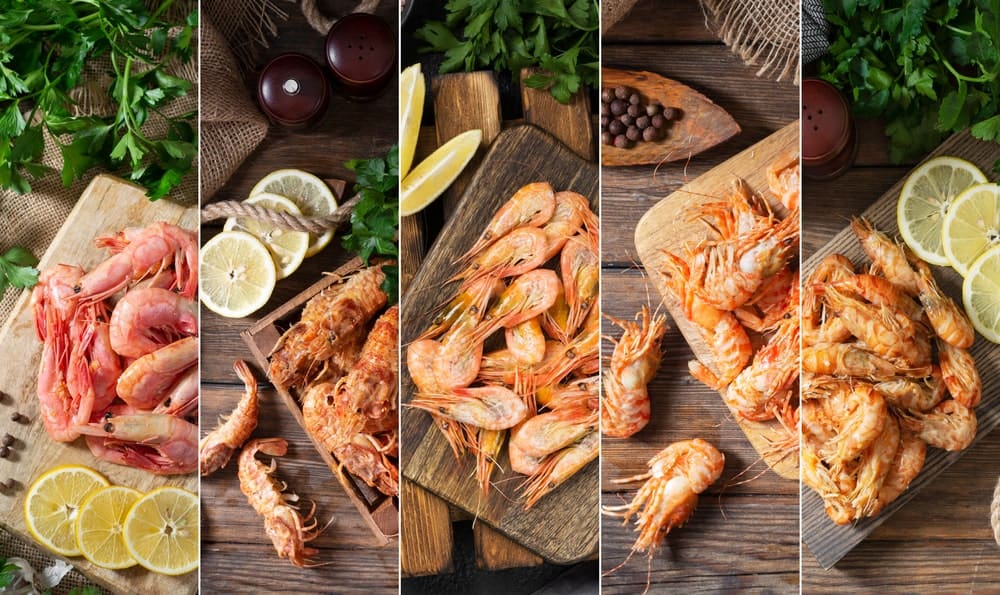 Thinking of shrimp only stirs up happy thoughts and memories for me.  I can’t remember a time that shrimp made me angry.  Although, I’m sure people with shellfish allergies would feel differently.  I think of Forrest Gump and Bubba’s monologue “Anyway, like I was sayin’, shrimp is the fruit of the sea.

You can barbecue it, boil it, broil it, bake it saute it.  Dey’s uh, shrimp-kabobs, shrimp creole, shrimp gumbo.  Pan-fried, deep-fried, stir-fried….”  The list of culinary delights created with shrimp could go on.  My personal favorites are shrimp scampi with sun-dried tomatoes and spinach and shrimp tacos.

In addition to being tasty food, shrimp also strike me as amazing creatures.  My kids are obsessed with the show Octonauts.  One of their (and my) favorite episodes is about the Mantis shrimp.  It is about two Mantis shrimp living under the ocean dueling over a piece of prime ocean property.  One Mantis shrimp has a “smash claw” and the other has a “spear claw” and they can’t help but fight each other.

In the end, they respect each other for their unique attributes.  Mantis shrimp are amazing creatures that are beautiful and vibrant in color and live in the Indian and Pacific Oceans.  There are 450 species of Mantis shrimp and all are either ‘spearers’ or ‘smashers.’ The smashers can accelerate their fists at the same velocity as a shot from a .22 caliber rifle.  They can crack or punch holes in aquarium glass, are older than dinosaurs, and they have amazing vision.

There are over 2,000 discovered species of shrimp in the world, and it is likely there are even more that we do not know about yet.  People all over the world enjoy eating shrimp.  The average American consumes about four pounds of shrimp annually and Texas, Alabama, Mississippi, Louisiana, and West Florida produce a total of 240 million tons of shrimp each year.

There are many types of shrimp that are commonly eaten, some that are eaten as specialties, some shrimp kept as pets in aquariums, and others that roam lakes or oceans.  Here is a look at 17 different types of shrimp.

Types of Shrimp for Culinary Use

Pink shrimp are one of the most popular in seafood cuisine.  They come primarily from the west coast of Florida and are relatively small in size.  They are normally pink when raw, but can also be white or gray.  Often called ‘salad shrimps,’ these are the perfect choice for shrimp salads. 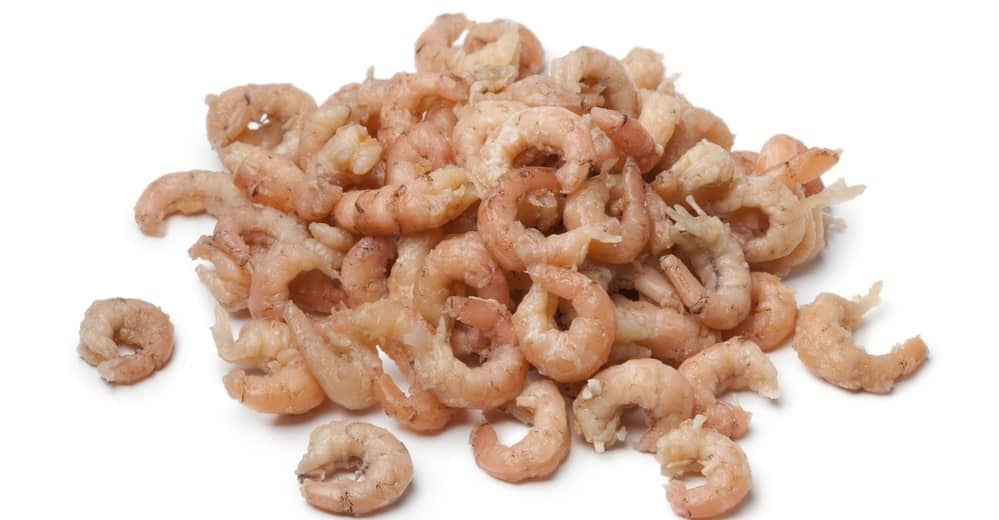 This type of shrimp is firm and has a brownish-red shell.  Brown shrimp come in several flavors and can be mildly sweet, mildly salty, or iodine-like.  These shrimp turn pink once cooked and have a very unique flavor when compared to other edible shrimps.  The most common chef preparation for this type of shrimp is to simply steam or boil them in order to allow the natural flavor to come through. 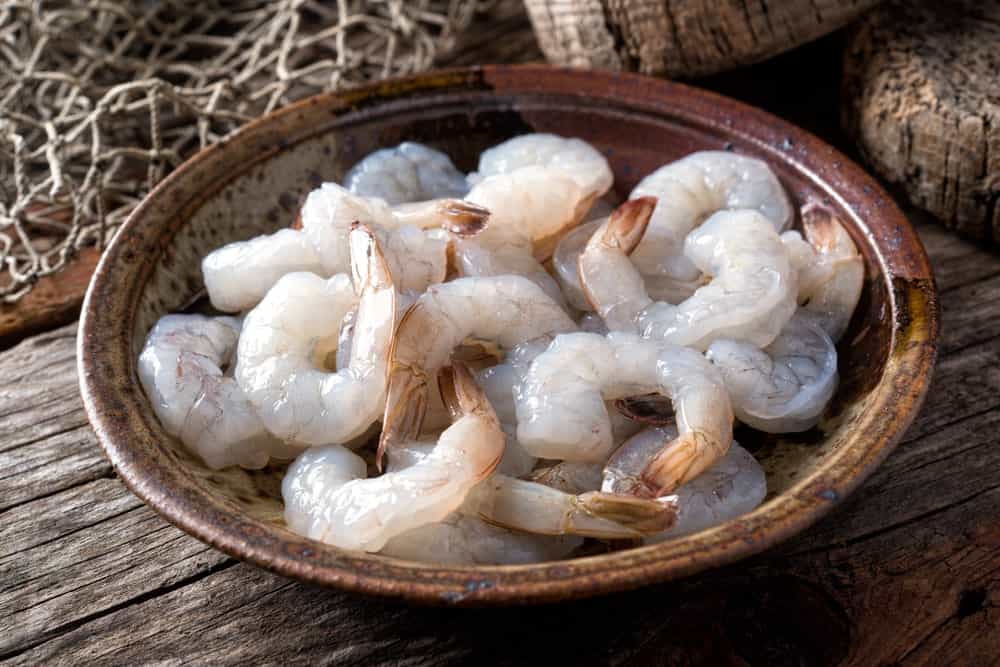 There are three main varieties of white shrimp, Chinese white, Gulf white, and Pacific white.  Many chefs use white shrimp because they have a classic flavor, a firm texture, sweet taste, and are easy to clean.  There are also many ways to prepare white shrimp, which include boiling, steaming, stuffing, grilling, baking, or frying. 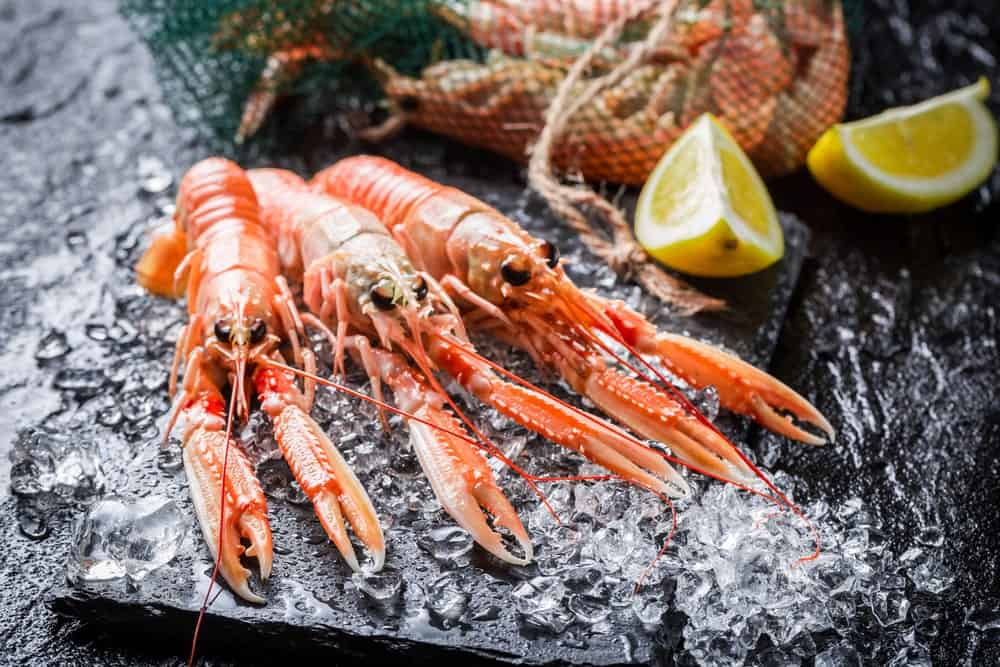 Rock Shrimp get their name because of their hard shells.  For many years, they were actually considered a ‘throwaway catch’ because of the difficulty in removing their shells.  However, in the 1960s, the machine was invented to peel off their shells before selling them.  The texture of a rock shrimp is firm and they have a sweet flavor that is similar to the spiny lobster.  For this reason, they are an affordable option to enjoy a lobster flavor without a lobster price tag. 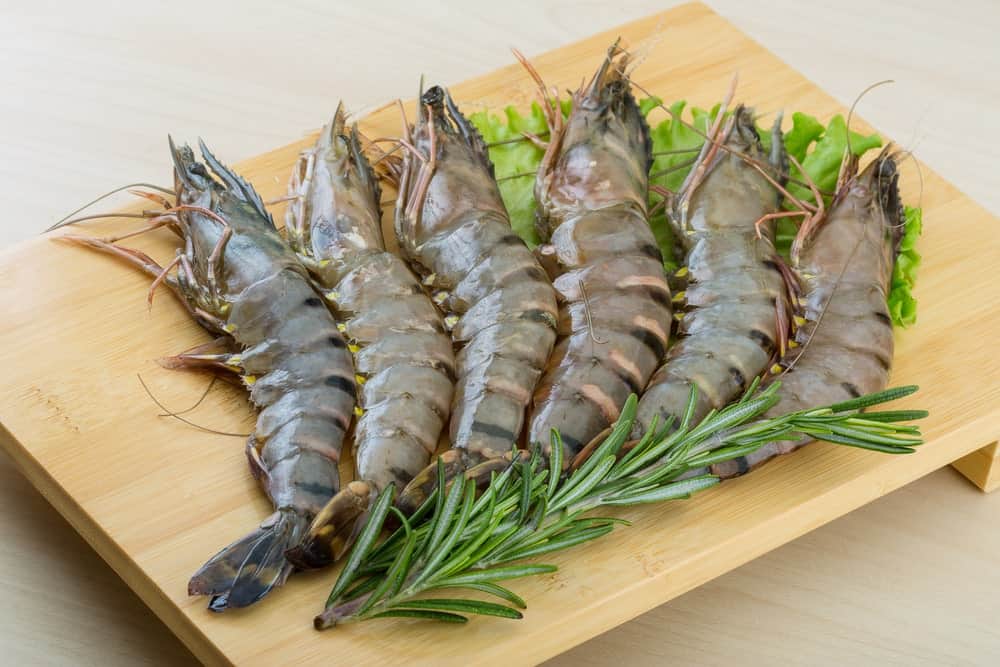 Not quite the hybrid creature of the ‘Liger’ from Napoleon Dynamite, the tiger shrimp was simply named so because of the stripes on its back.  These shrimp are native to Asian and African continents, being found in the wild in Thailand, Vietnam, the Philippines, and India.

They are also farmed and popular for their mild flavor and firm texture.  This makes them an easy option for those new to cooking shrimp.  Tiger shrimp can grow up to 12 inches long and popular methods for preparation include steaming or grilling. 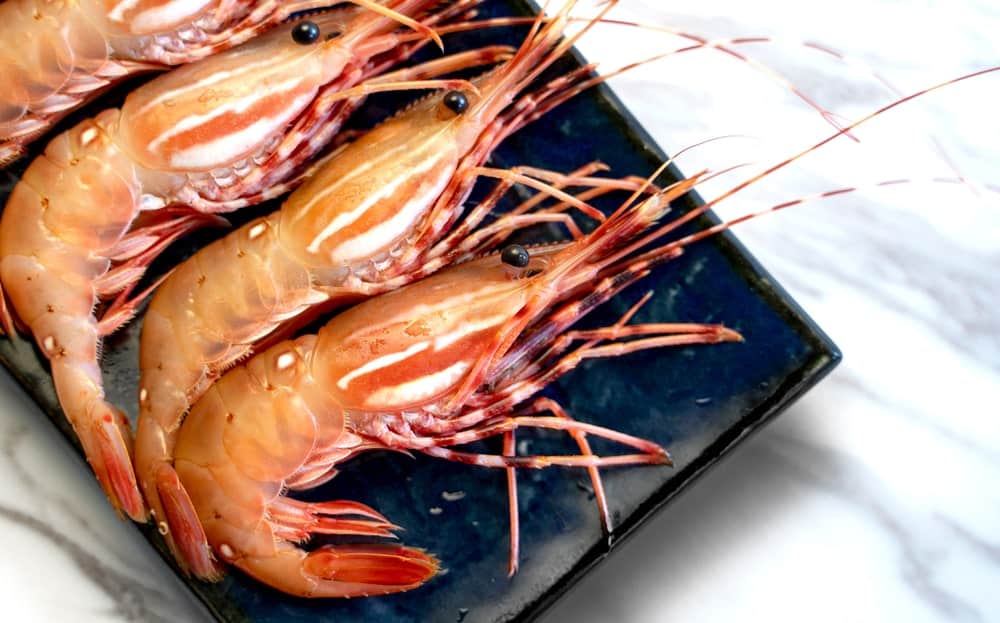 Often called the ‘Lobster of Alaska,’ the Spot shrimp looks like a lobster in shape and color.  This type of shrimp has an exotic flavor and adds sweetness to any dish.  These shrimp are one of the most tender varieties available for cooking and turn out moist and juicy.

Unfortunately, this attribute also makes these shrimp difficult to clean and prepare because the shells can easily break into small pieces.  Jumbo varieties of Spot shrimp are available.  These can grow up to sizes of 12 inches.

Types of Freshwater Shrimp for an Aquarium

Sure, eating shrimp is a delicious and popular pastime, but so is watching shrimp in an aquarium.  These amazing little creatures can add a pop of color and a slew of activity to any aquarium.  There are many species that are well suited to live in a contained environment.  Whether you already have an aquarium or are looking to add one to your home, take a look at these varieties and see which ones you would want to invite to your tank. 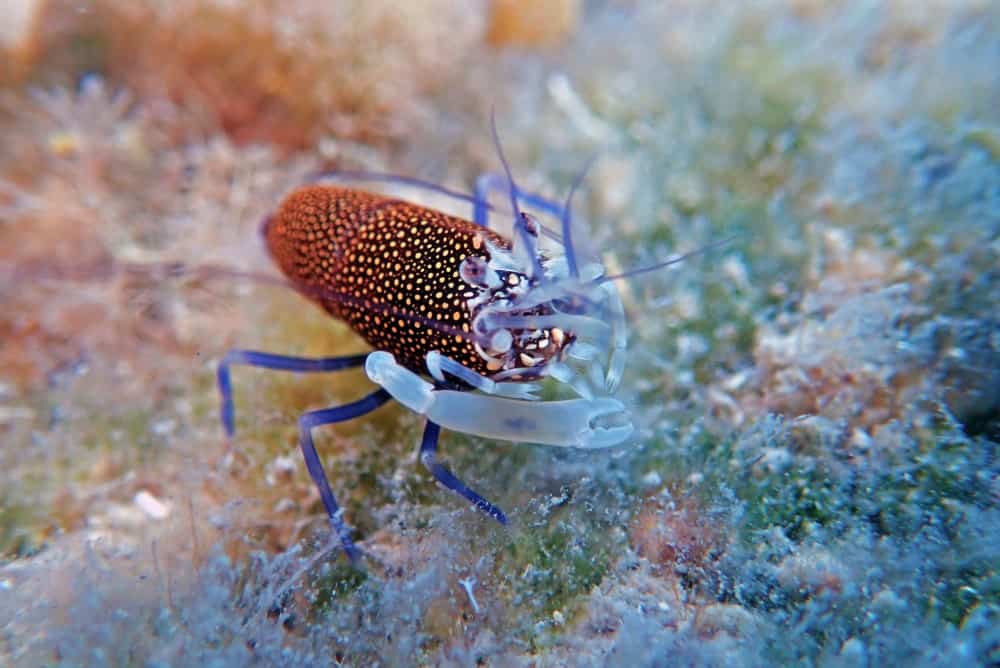 These creatures are impressive even before learning about them because of their great names.  The Bumblebee shrimp originates in Southern China and got its name because of its yellow or white body that has black stripes.  There is also a Bee shrimp, which belongs to the Cardina cantonensis family, but this is quite different than the Bumblebee shrimp, which belongs to the Cardina breviate family.

This type of shrimp does best when kept in pairs.  Be sure to feed them plenty of meaty varieties of shrimp food, such as small fish, regularly.  Take care to keep your aquarium balanced for these shrimp, keeping a close eye on nitrites, iodine, and copper concentrations in the water.  Do not put them in a tank with large fish that are aggressive, as these fish may eat Bumblebee shrimp due to their small size. 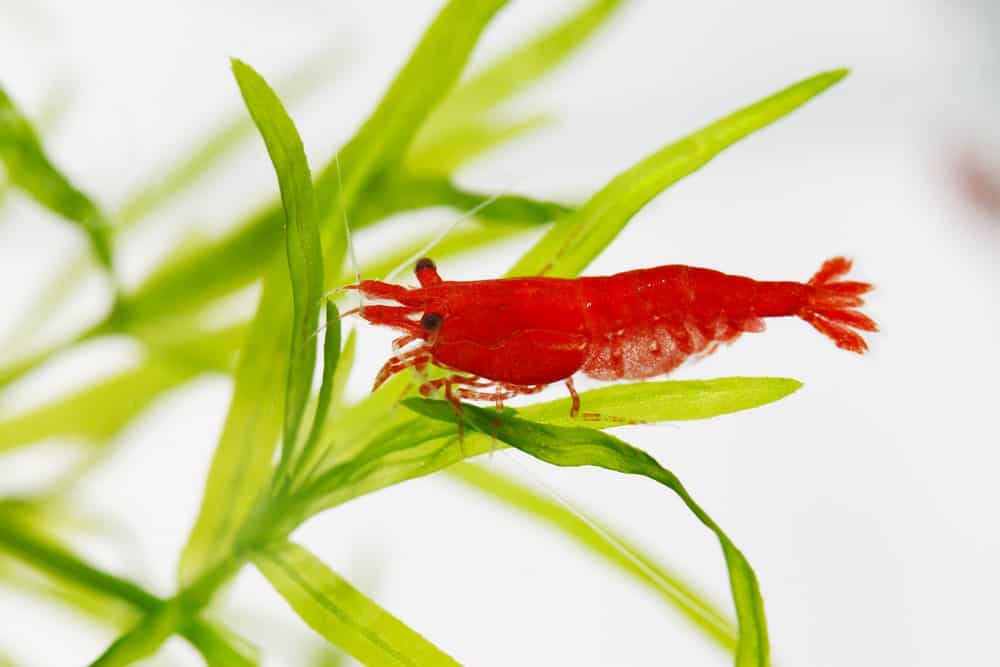 This cute, brightly colored red shrimp is a member of the Neocaridinia davidi species.  It is happy in freshwater that is room temperature or slightly cool (28 to 29 degrees Celsius).  A temperature higher than this can promote breeding and could possibly become dangerous because oxygen concentration is reduced in warmer water.

Have a tank with only Red Cherry shrimp, or place them in a community tank.  They usually do well with other creatures, even feeding on leftover fish food.  These omnivores also eat algae and pellets. 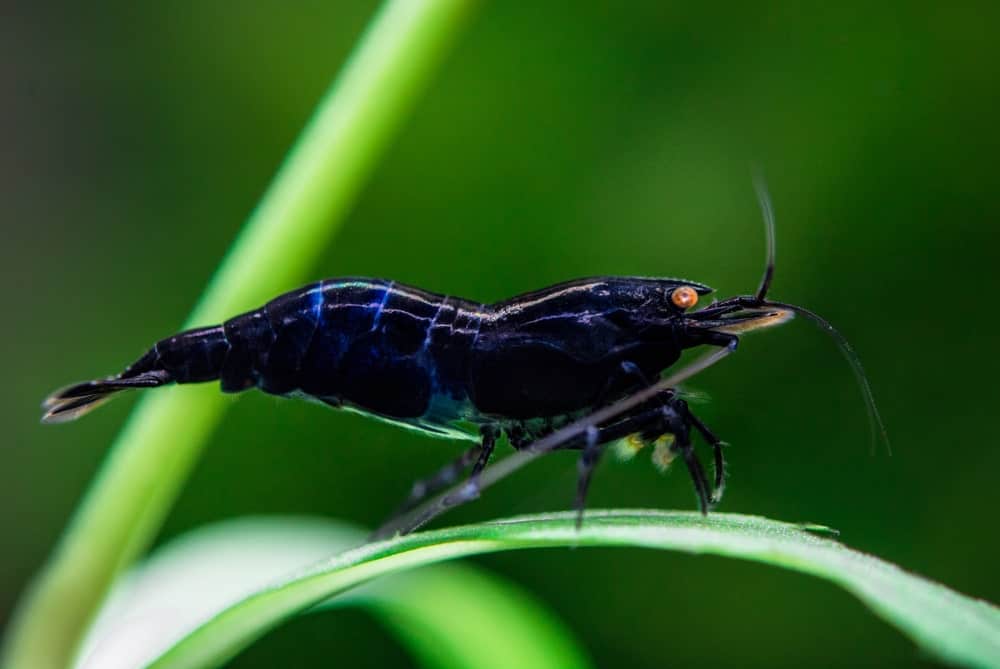 The Blue Tiger shrimp is a member of the Caridina cantonensis family and will reach about 1″ to 1.5″ when mature.  Those who place Blue Tiger shrimp in their tank enjoy their distinct blue stripes and vivid orange eyes.  Their colors really pop against the bright greenery in a fish tank.  They are great conversation starters.  This type of shrimp will do well in a freshwater tank that has a neutral or slightly acidic pH.

It takes some effort to take good care of Blue Tiger shrimp.  They need their tank cleaned every week or every other week.  Proper pH levels as well as a good diet is needed.  Blue Tiger shrimp are omnivores and will eat both plant and meat-based food.  Keep in mind that overfeeding supplemental food can raise nitrite and ammonia levels in the tank, which could prove fatal to these shrimp. 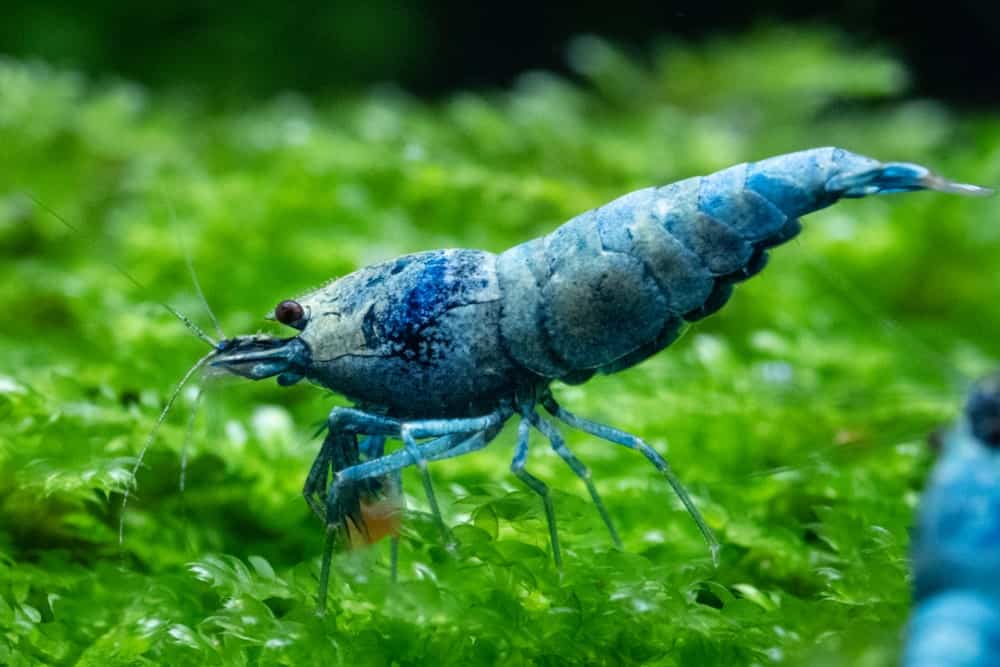 Also known as the Taiwan Bee, the Blue Bolt shrimp is a little more difficult to find.  Most pet shops will not carry this shrimp, but they can be found at online stores.  As can be deduced by the name, this shrimp has a bright blue head, with the blue color gradually changing to creamy white or pale blue near the tail.  This interesting color makes them a favorite for aquariums, standing out nicely against vibrant greenery and pebbles. The Blue Bolt shrimp is related to the Blue Tiger shrimp and requires similar care. 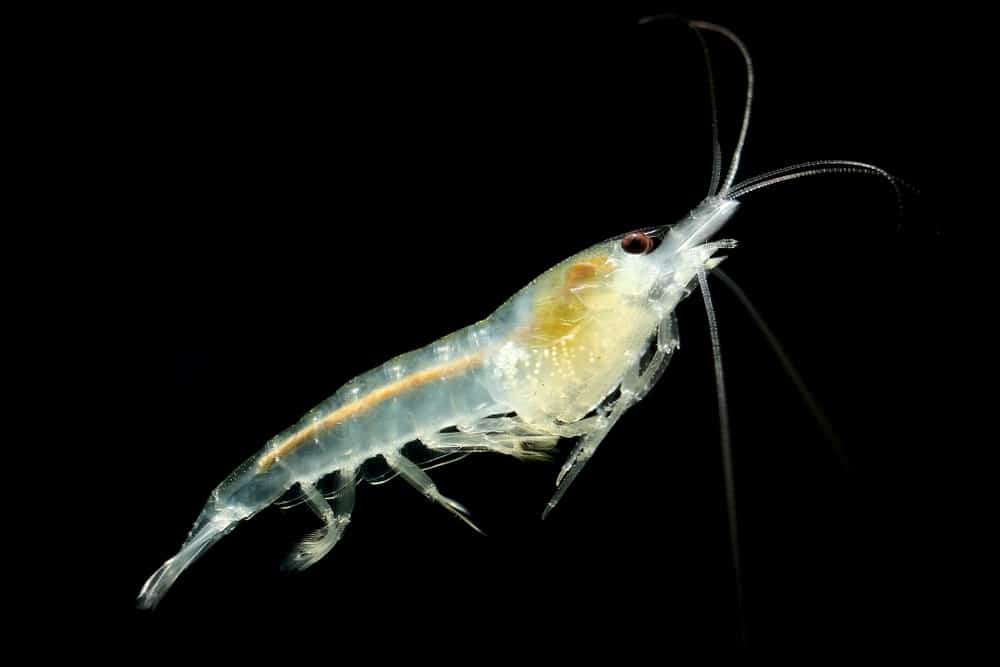 The Snowball shrimp is a great choice for beginners.  They are relatively easy to take care of and can endure hard or soft water.  Just be careful of overfeeding, as this can cause poor water quality, which could lead to deteriorating health.

The Snowball shrimp gets its name because the pure white eggs carried inside the shrimp look like snowballs.  They do breed quickly and are active members of the aquarium community, especially when kept safe from predators.  The Snowball shrimp is an omnivore and will usually be very helpful in controlling algae in aquariums. 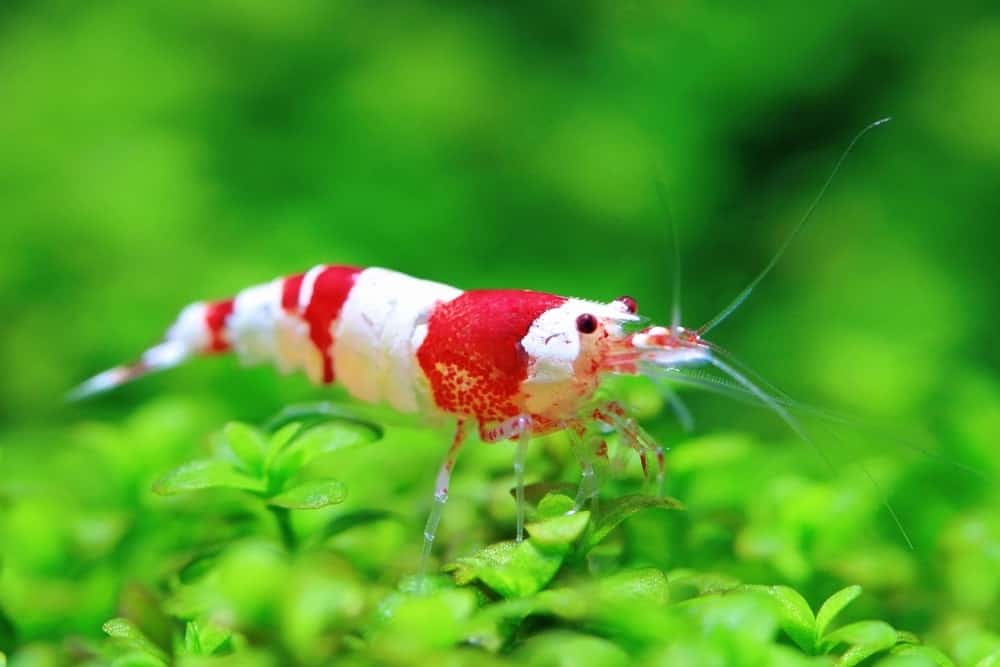 Selectively bred for ornamental use, the Crystal shrimp shares ancestry with the original Bee shrimp (Caridina cantonensis).  This type of shrimp can be found in two varieties, the Crystal Red and the Crystal Black shrimp.  Both types need the same type of care, their coloring is just different.  Both are white and one has red stripes, the other black.

Caring for Crystal shrimp is difficult.  Pure water is needed, as well as many places to hide.  This type of shrimp does not like to swim freely in exposed waters.  If other creatures will be living in the tank with Crystal shrimp, make sure that they are not aggressive, as Crystal shrimps will easily become prey for predators. 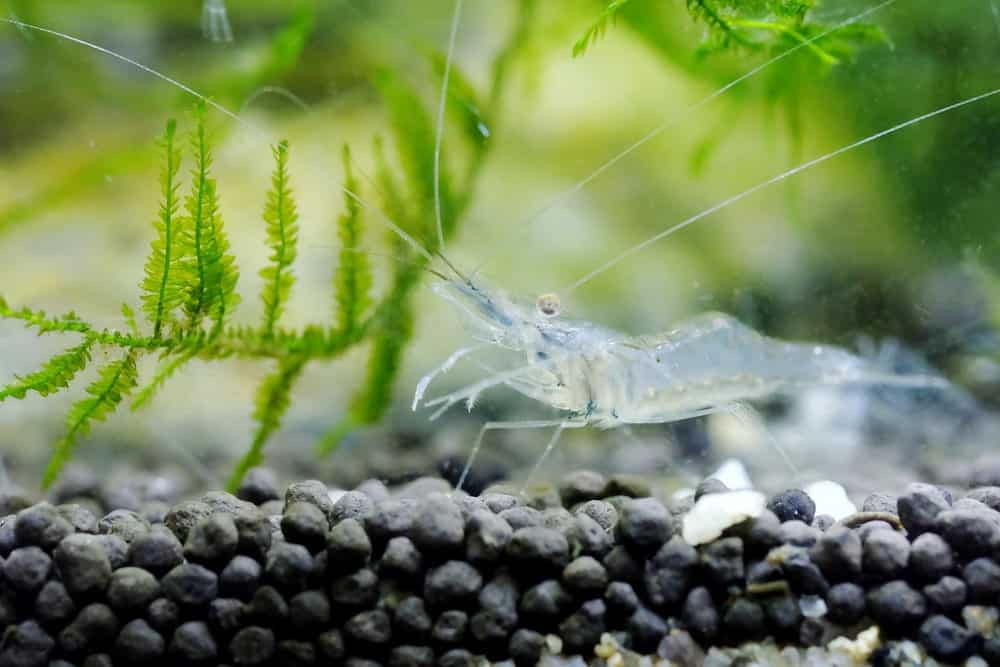 These fascinating little creatures are members of the Palaemonetes family and have a clear, transparent body.  They look like glass and are easily protected from predators.  Keep them alone or in a group, just be sure to include places to hide.  They are very helpful in keeping a tank clean, as they eat leftover fish food as well as algae. 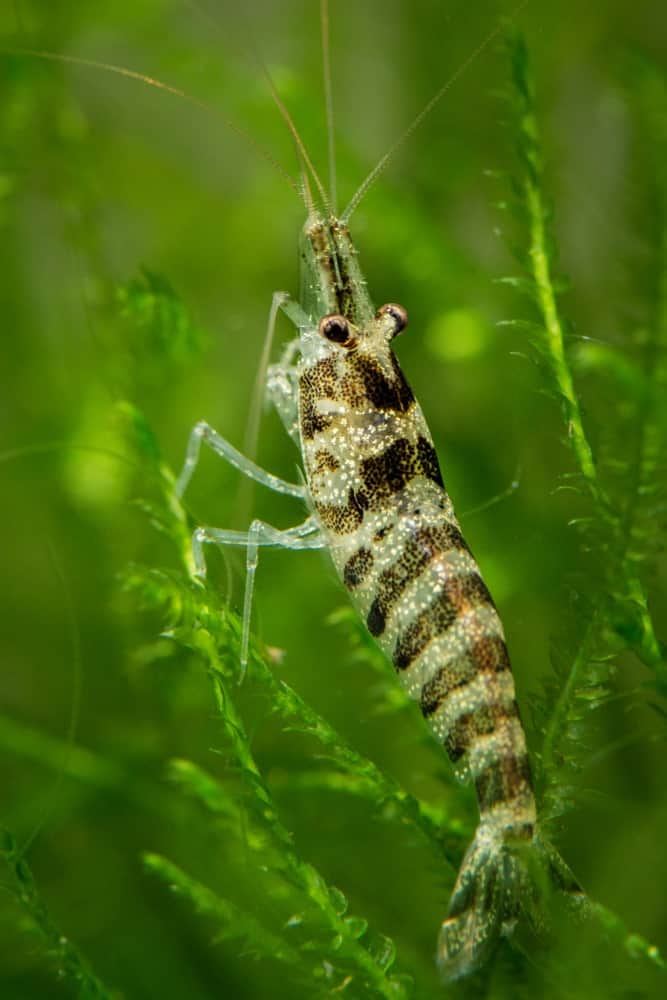 There are many colors of Caridina Babaulti shrimp available.  Dress up your tank with different colors of red, brown, green, yellow, and black zebra-striped.  These shrimp are easy to take care of and are omnivorous, however, they often prefer to feast on decaying plant matter instead of meat.  Although they are easy to take care of, they do require stable temperatures, balanced pH levels, good filtration, and controlled levels of ammonia and nitrites. 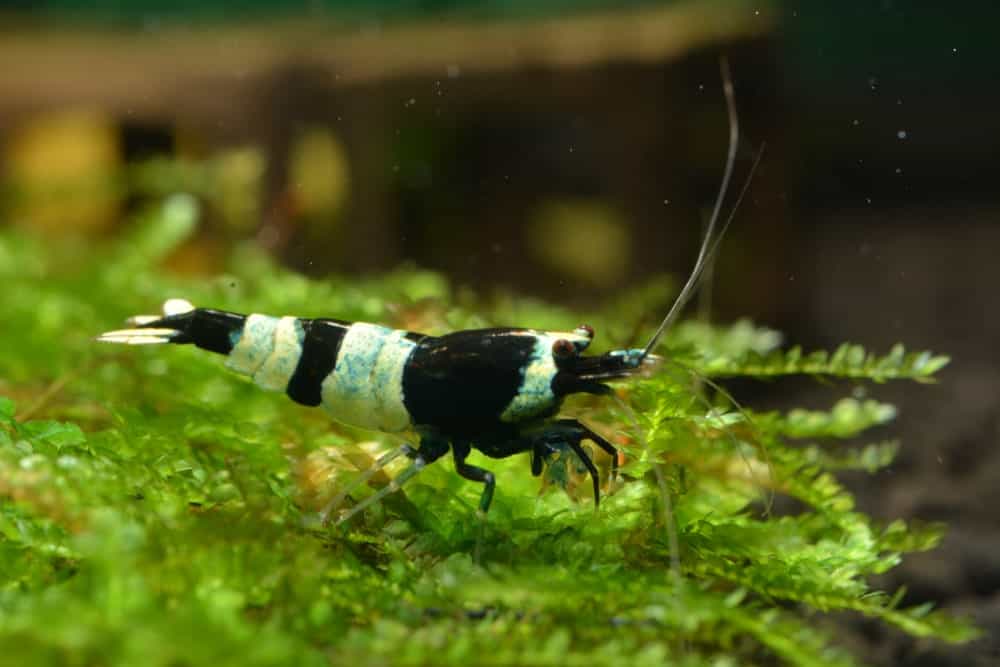 I might go pick up a few of these just because of their awesome name.  These black and white shrimp dress up any tank, but are more difficult to take care of.  They are not so good for beginners because they are sensitive to water changes.  They do best in large tanks with controlled water conditions.  This type of shrimp is an herbivore, and care needs to be taken to not overfeed them. 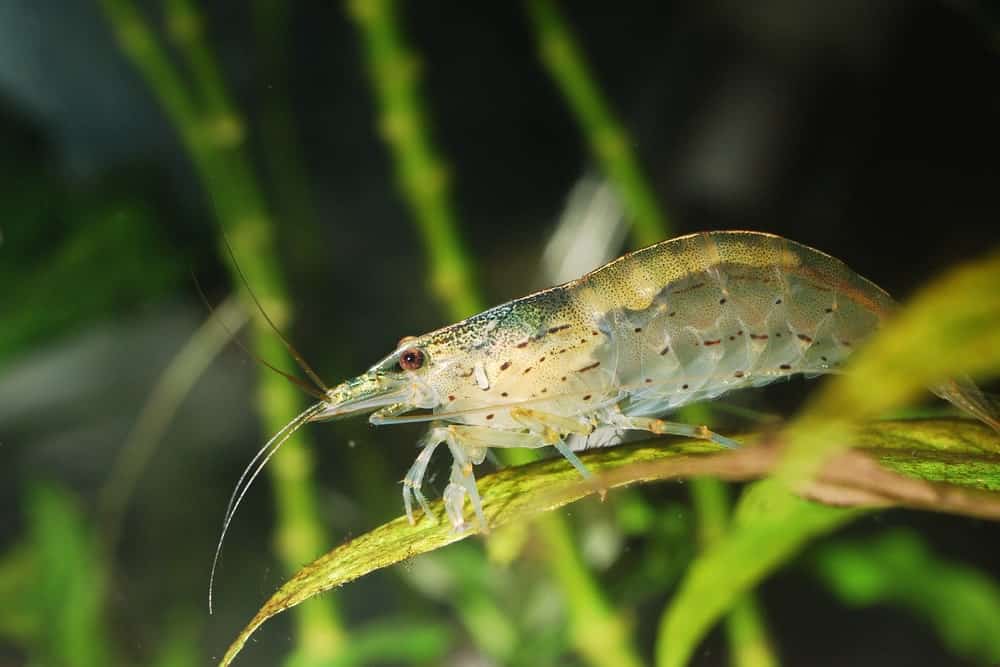 The Amano shrimp is an excellent choice for anyone new with keeping aquariums.  They eat algae, keeping your tank clean and thrive easily as long as there are no predators in the tank.  These shrimp can grow to two to three inches long, making them a prominent addition to any tank. 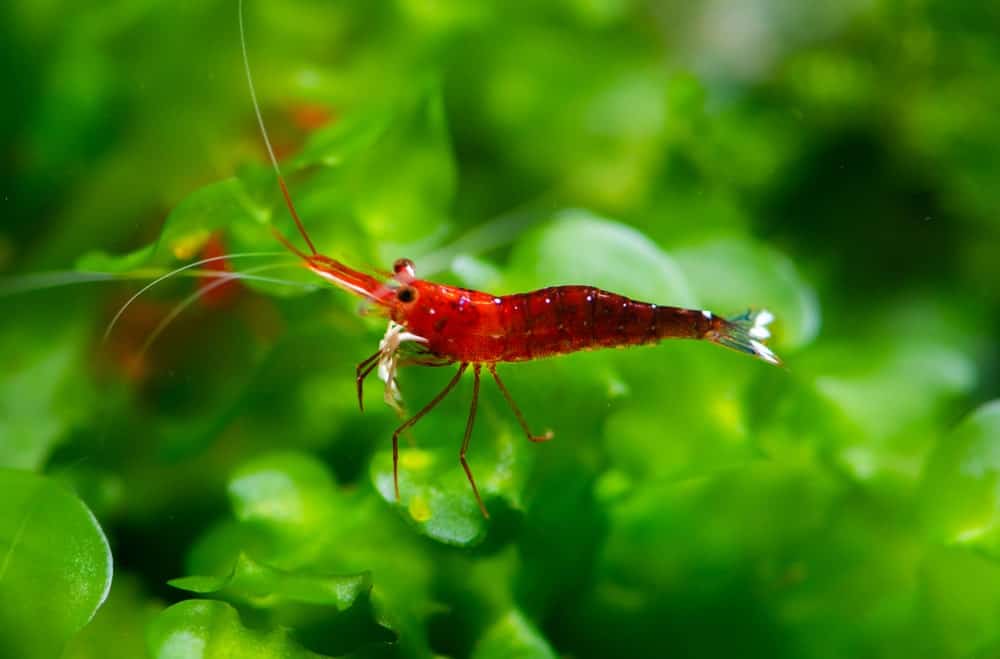 These bright red shrimp with black and white markings originate in the lakes of Sulawesi, Indonesia.  It is a challenge to keep these shrimp alive and happy, but rewarding.  Sulawesi shrimp are omnivores and feast on algae.  They require hard, warm water with a higher pH. 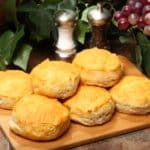 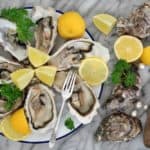