Learn all about the different parts of a pumpkin. Plus, how to use them, which ones are edible, and even a fun recipe to make with them!

Fall is all about pumpkins, isn’t it? Carving pumpkins is one of the best things to do this season! Not to mention, pumpkins and gourds are used for decorations both indoors and out. If that wasn’t enough to make pumpkin the star of the season, you can roast and bake with them, add it to your morning latte, and even snack on the seeds.

Did you know that pumpkins are actually a fruit? So many people think they are a vegetable, but they aren’t! They belong to the same family as cucumbers and watermelons.

They may seem like a common, average fruit, but they are actually complex and have a varied family.

In all the excitement to cut them up or display them as Halloween decorations, it’s often too easy to forget about all the uses of the amazing parts of a pumpkin.

First, do you know how pumpkins grow?

Pumpkins are grown around the world and, in ideal conditions, will mature in about three to four months. They grow above ground attached to a vine. The vine sends them nutrients as they grow.

After about four months of growing, they are ready to be harvested.

Once picked, they can remain intact for another two months. However, if they are carved for Halloween, they will start to rot much faster when exposed to the open air. 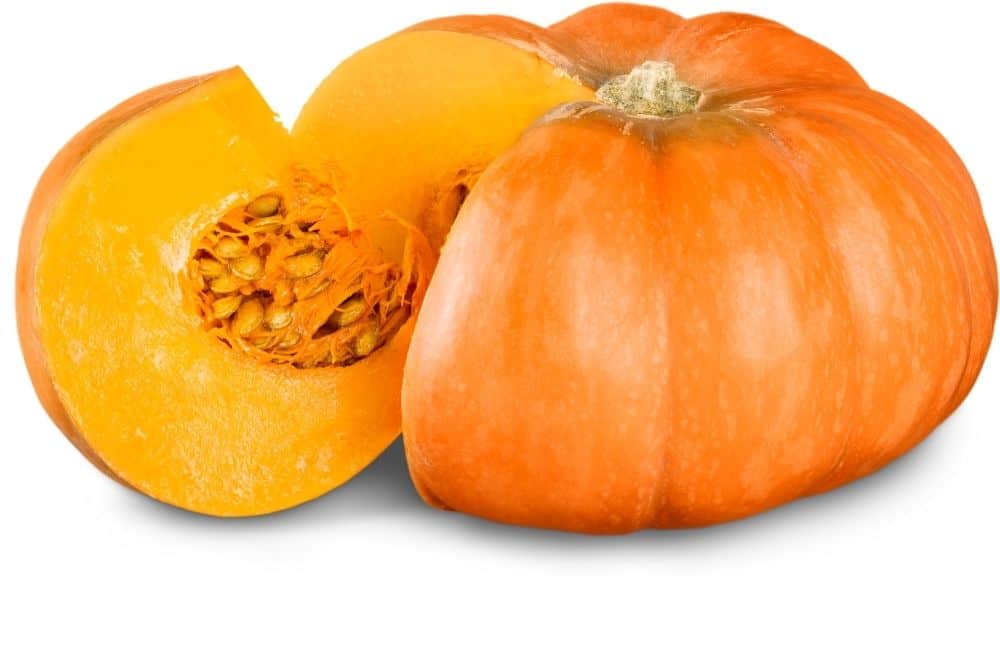 Parts of a pumpkin

Depending on the type of pumpkin, the vine may sprout several pumpkins on one vine. They can reach up to 30 feet long, and they have roots that go deep into the ground. The root draws nutrients and water out to feed the fruit.

Think of the vine as the straw the pumpkins use to get nutrients from the roots. 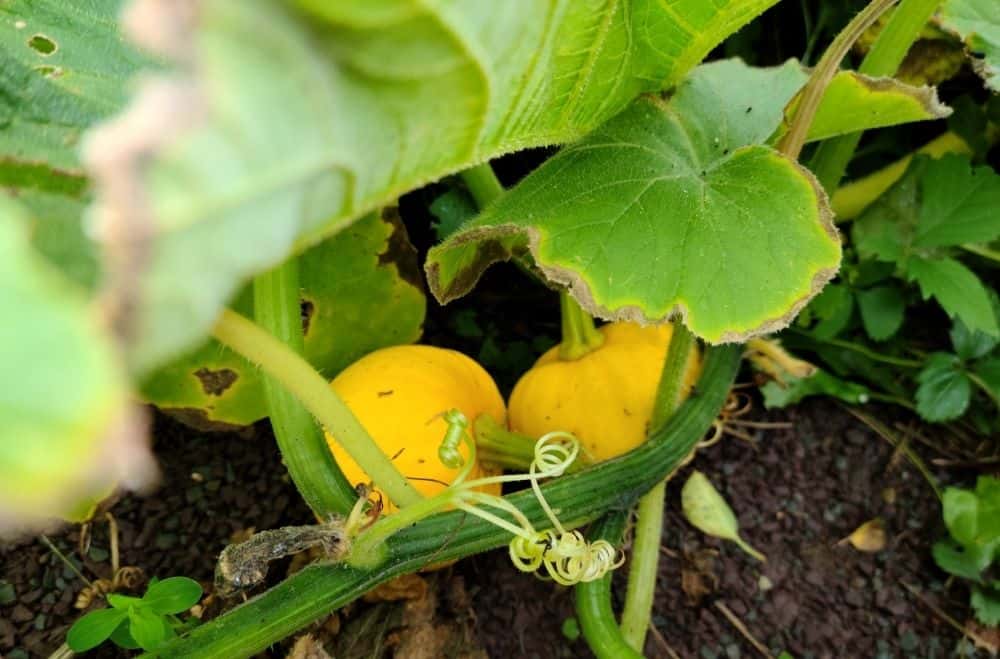 The stem is the next part of the pumpkin – this is the woody or hard piece that sticks out of the top.

Stems are green while the pumpkins are growing and attached to the vine. Then, as the fruit matures, they turn a darker green, then brown.

They can be rather curvy and interesting looking. People have been known to dry them out, paint them, add them to artwork, and use them to fashion all sorts of jewelry, tools, and various types of handles. 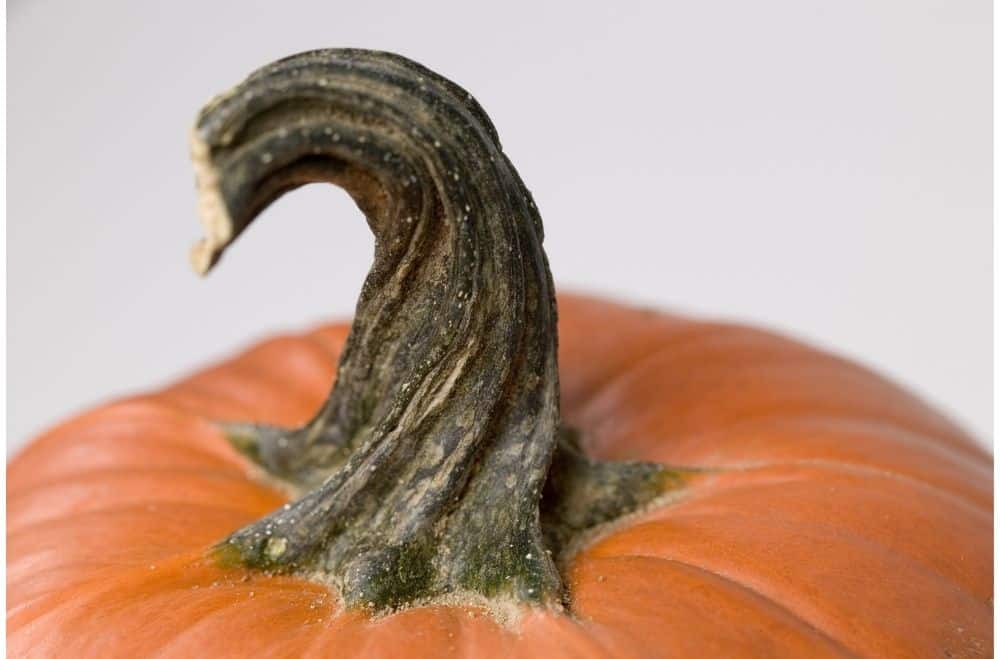 The tendrils are long curly, hair-like extensions that grow on the top of the pumpkin. Pumpkins are also green while the plant is growing.

They reach out and wind themselves around fence posts, trees, latticework, and even other plants.

These tendrils also help support the pumpkin while it is growing. They grow in accordance with the weight of the fruit and can hold it up to ensure it doesn’t fall over and snap off the vine before it is ripe.

They might look dainty, but these tendrils are actually really strong! 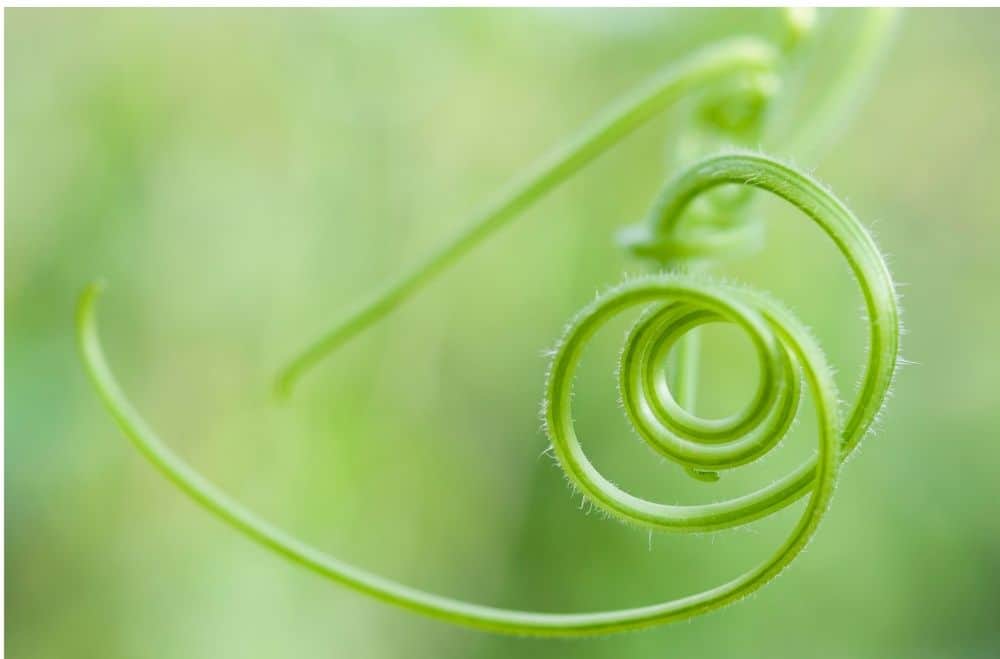 The leaves grow along the vine. They absorb sunlight and help to feed the pumpkin as it grows. They also provide protection to the vine and even the soil where the vine is based.

If the leaves are drying out or wilted, it is a sign the pumpkin needs water.

People can eat pumpkin leaves as they are rich in calcium, potassium, phosphorus, iron, magnesium, vitamins A, K, and folate. They are used around the world for their health benefits and are consumed in various ways.

You can add pumpkin leaves to stews, soups, and sauces, use them raw in salads, steamed, or any way you like.

The leaves are often quite large, and pumpkins grow underneath them. 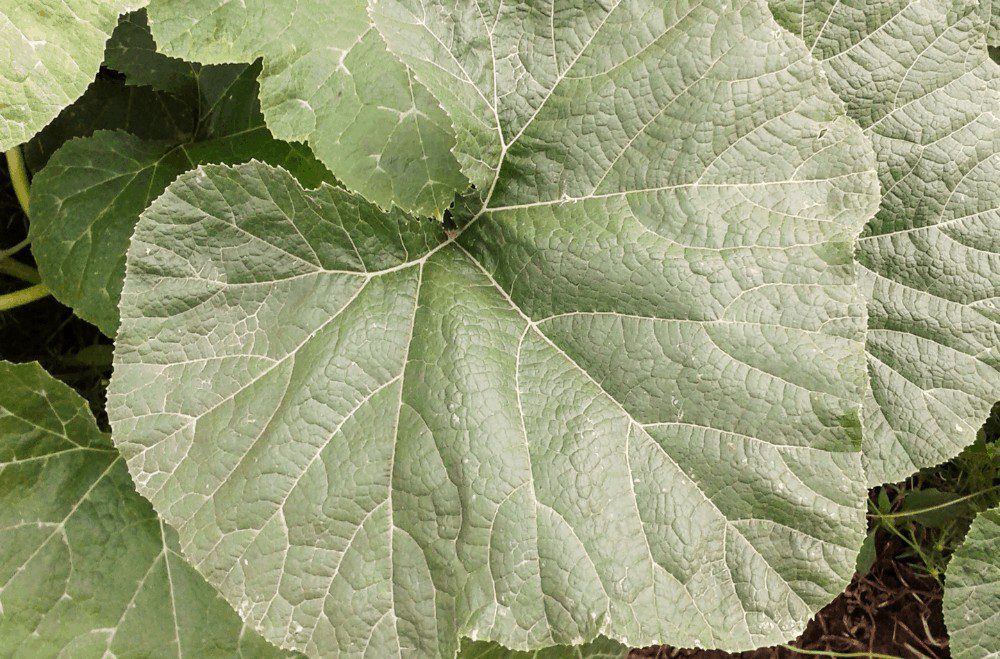 The flowers on a pumpkin vine appear before the pumpkin fruit does. In fact, these flowers grow into mature pumpkins. The flowers can be bright orange or yellow, and they are there to help pollinate and provide nutrients to the plant.

The male flowers will appear first, and they open up most often in a star shape. They can be quite big and pretty. They will attract bees who will pollinate the flowers.

The female flower comes after the males and can be identified by the bulb-like protrusion at the bottom or base of the flower. The female flower will have softer, rounded petals when in bloom.

These flowers are also edible and used for food and decorative purposes. 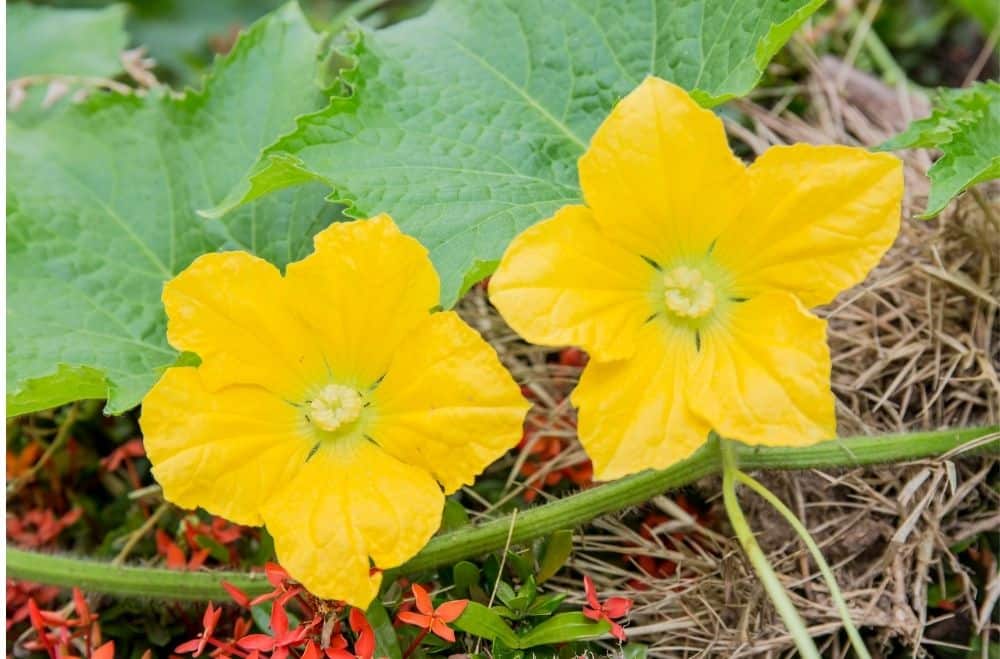 The shell is the whole of the outer pumpkin. It is usually referred to as the shell without everything else, like the insides and the vine, and all the bits mentioned previously.

The shiny orange exterior of a pumpkin is referred to as the skin. It is sometimes called the rind or shell. It is a protective layer that keeps insects and disease out of the fruit.

What is the difference between the shell and the skin?

The shell includes the skin and the pulp – it’s everything except the seeds. The skin is just the shiny part that covers the outside of the pumpkin. You can actually peel the skin off.

People are often very creative regarding the outer layer of the skin. It is used for making chips and other snacks and is also used in natural beauty products and treatments.

The ribs are the very visible ridges that run from top to bottom of the pumpkin. They can be very deep or almost non-existent and vary depending on the variety and growing conditions. 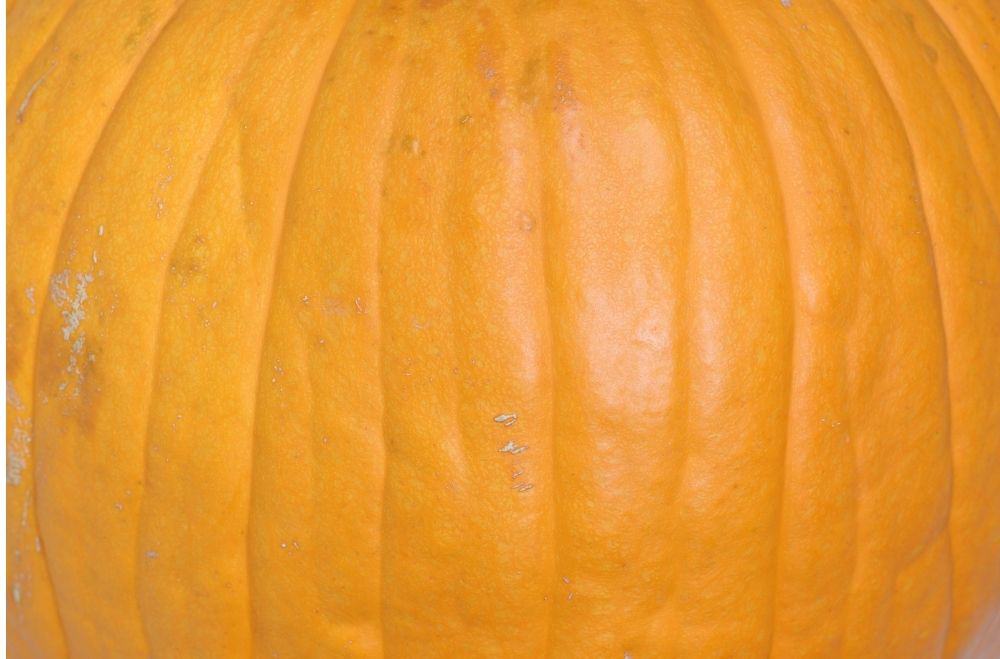 The pulp is the inside contents of the pumpkin that is scooped out when carving a pumpkin. Also referred to as the meat, it is the most popular part of this fruit.

It is used for hundreds of ideas, from hummus and dessert to beer and, of course, pumpkin pie. It is very tasty, low in calories, and adds a nice texture to many baked items and soups, and it is also rich in vitamins, minerals, and antioxidants.

The pulp is also used in flavoring for ice cream, coffee, candy, and many more treats. It can be eaten raw and even used as a face mask and in other beauty products.

You’ll see below how it can also be used to whip up some delicious muffins! 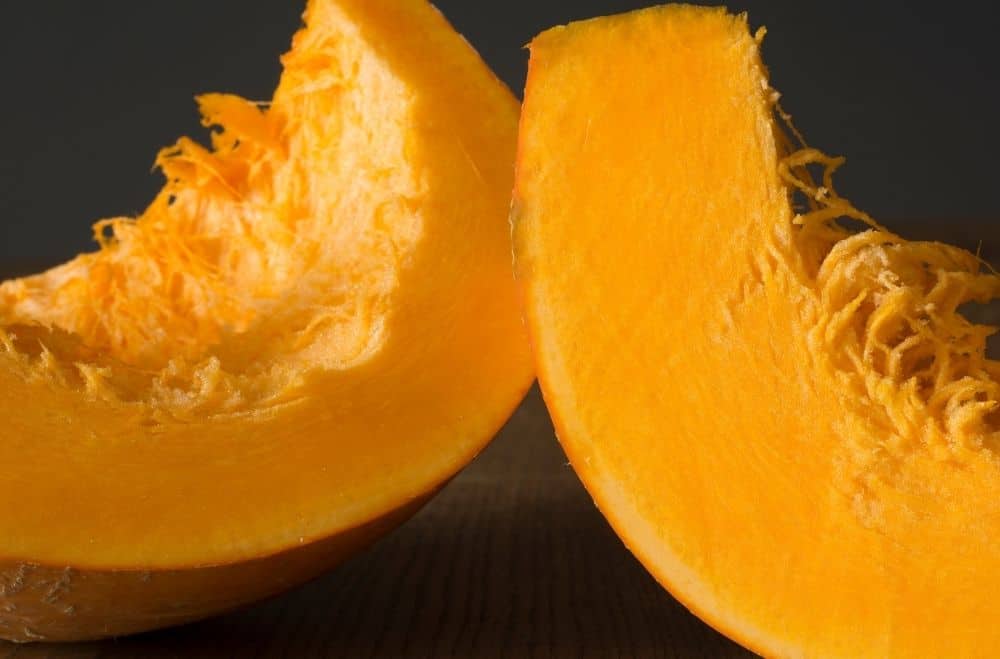 The pumpkin has hundreds of seeds mixed in with the pulp. They are quite large, making it easier to separate them from the rest of the pulp. They can be saved and sprouted the following year for the next batch.

Pumpkin seeds are also a very popular and nutritious snack. They are easy to remove and then rinse and roast in the air fryer.

They have magnesium and antioxidants, are high in fiber, and have many other heart health benefits. The nut inside the seeds is what is desired, but the shells are used in many products and foods, as well. 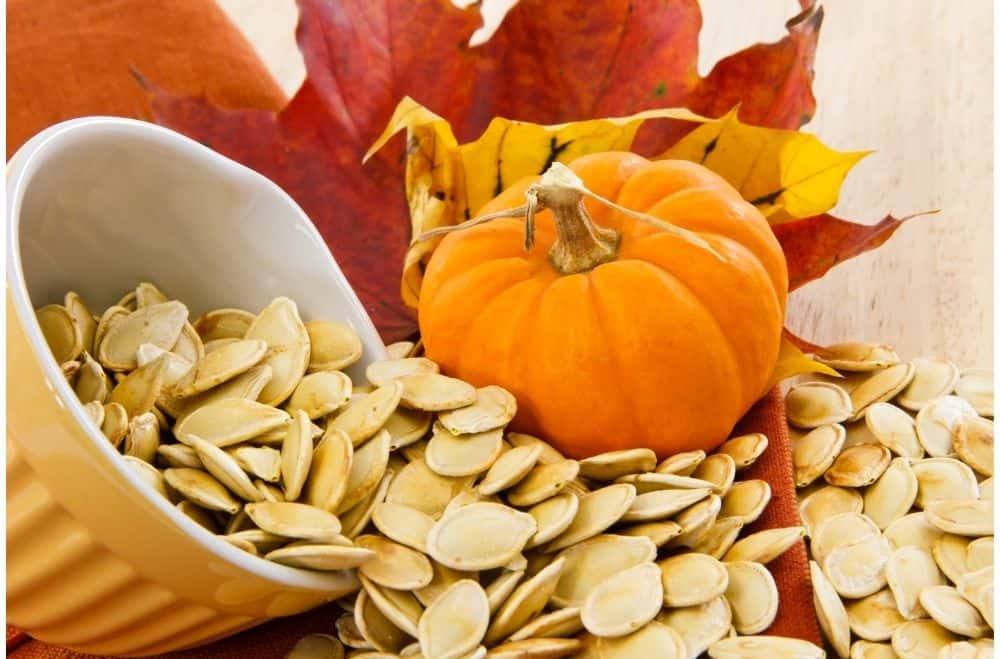 FAQs about parts of a pumpkin

Before we get to a tasty recipe that uses fresh pumpkins, here are some questions people often ask about the different parts of a pumpkin.

What are the edible parts of a pumpkin?

You can actually eat the entire pumpkin except for the stalk. The skin is technically edible but extremely tough and not at all appetizing.

The seeds, leaves, and flesh are all edible.

How are pumpkins harvested?

It’s actually pretty simple to harvest pumpkins. Take a very sharp knife and cut the stem from the vine, leaving at least 4 inches of stem attached.

Most farmers or gardeners harvest pumpkins when they are fully ripe, not before. Then, carefully place them in a box. They bruise easily, so it’s important to be very gentle.

How many ribs does a pumpkin have?

The ribs are the vertical lines that run from the stem to the bottom of the gourd. The number of ribs on pumpkins varies from fruit to fruit. Most have around 25 ribs.

It’s fun to count them – so go look at yours and see how many ribs it has!

What is the inside stuff of a pumpkin called?

Inside the very center of the fruit, you’ll find the pulp and the seeds. The pulp is sticky, wet, and really stringy.

What is the stalk of a pumpkin called?

This is a funny word that you probably haven’t heard before. The stalk of a pumpkin is actually called a peduncle! This is what protects the pumpkin’s parts that feed from the vine. Without the peduncle, the fruit wouldn’t grow nearly as big. 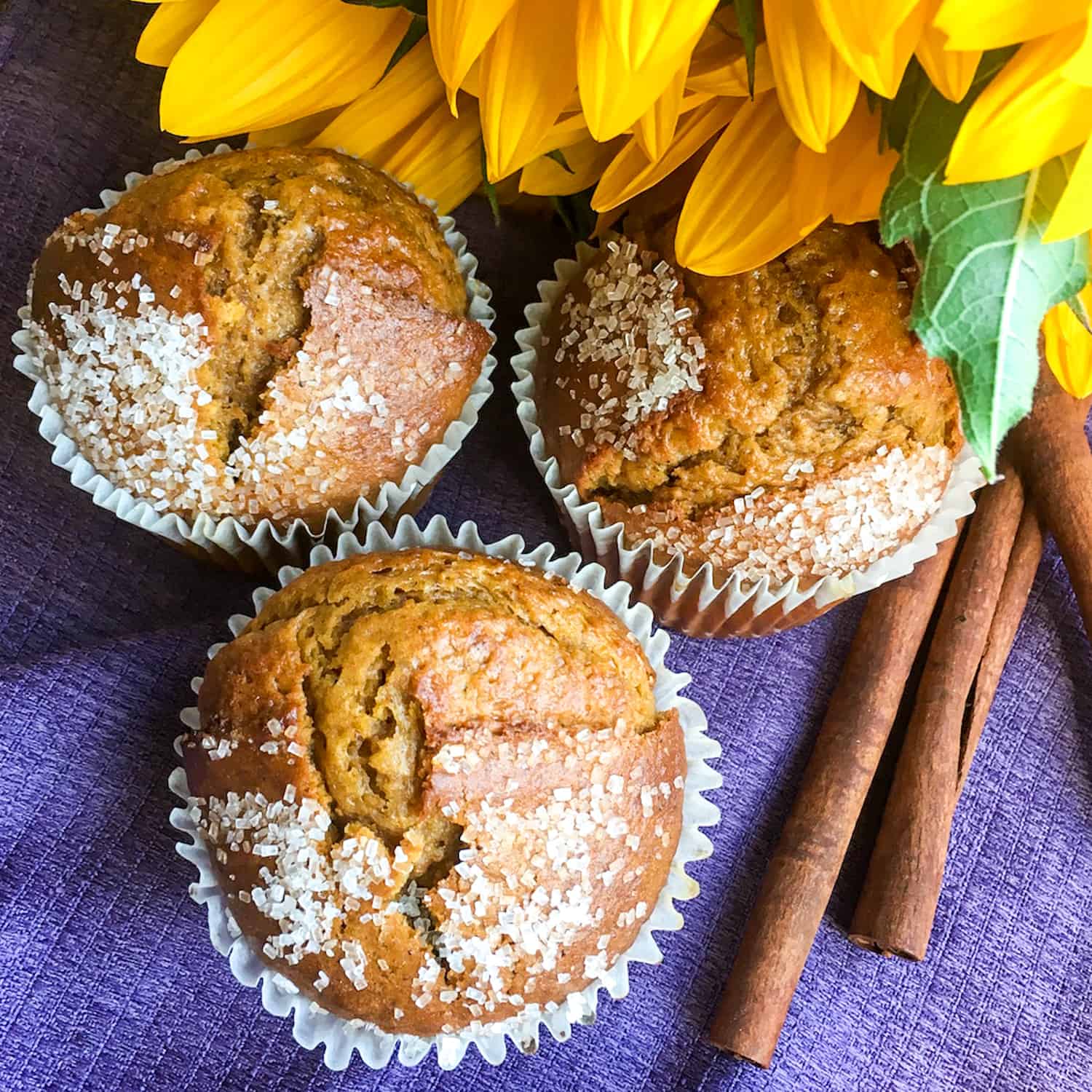 Now that you know all about the parts of a pumpkin, here is a tasty pumpkin spice muffin recipe you should make! 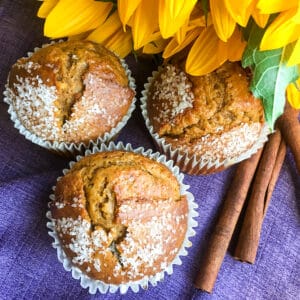 Although pumpkin muffins are traditionally a fall favorite, there is no reason you can’t enjoy these delicious lightly spiced muffins all year round. This version is topped with coarse sugar for a decorative touch, but they are just as wonderful without. Tip: Make sure you choose 100% pure pumpkin vs. pumpkin pie filling for this recipe because you are already adding sugar and other spices.
Print Recipe Pin Recipe
Prep Time 15 mins
Course Breakfast, Dessert, Snack
Servings 12 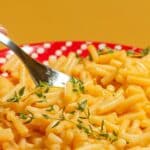 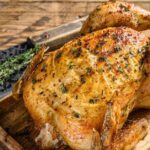