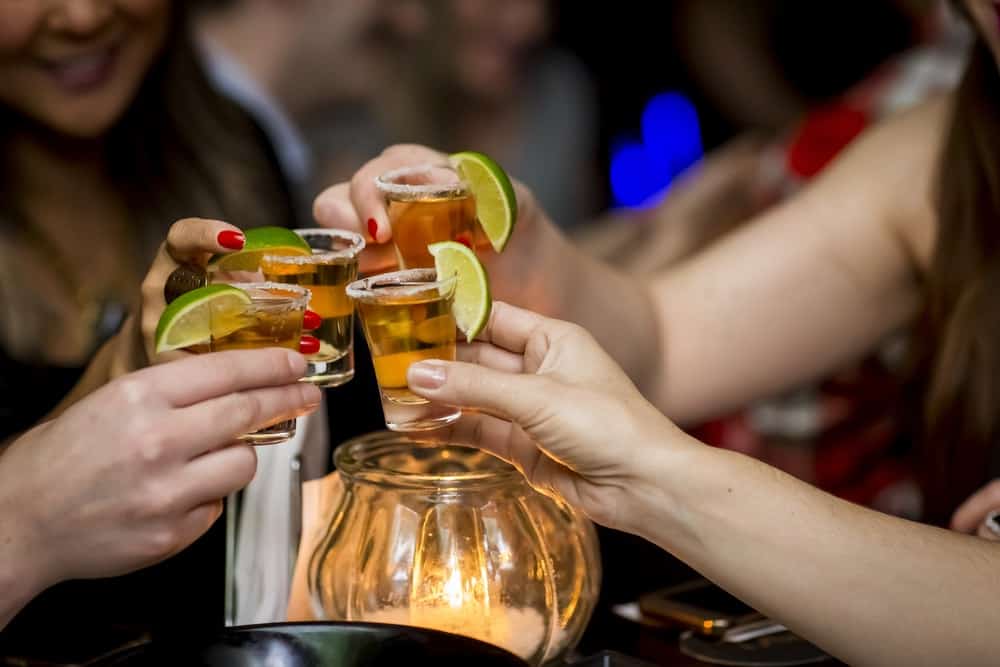 Used to be the word “tequila” was code for hard partying. When someone told a story, as soon as they said, “doing tequila shots,” you knew the main character was about to do something crazy. If you were planning a frat party, you knew you’d need lots of it. If, on the other hand, you were hosting a more formal affair, the tequila may not even have made the menu.

Well, times have changed. Though tequila has been a popular drink in the U.S. for years, it has not always been known as a spirit for sampling and savoring. Tequila connoisseurs were few and far between if they existed at all. But today, not only does tequila come in a wide range of premium varieties, but the fact that every tequila has its own unique terroir, or flavor based on the region in which it is produced, is recognized.

Tequila is a distilled spirit made from the blue agave plant. It is produced primarily in the regions surrounding the city of Tequila, Mexico, in the state of Jalisco. In many parts of the world, tequila is served as a shot with lime and salt; however, in Mexico, it is served neat.

Tequila is a type of mezcal. Mezcal simply means any liquor made from the agave plant. Tequila is always made from blue agave, but every region where the plant grows has its own unique varieties of the plant. Agave harvested from the lowlands tends to be more herbaceous in taste and aroma. Plants grown in the highlands, on the other hand, tend to be larger in size and have a sweeter flavor and fragrance.

The central-western part of Mexico, where Jalisco lies, has long been a hotbed of Mezcal production. In fact, the vast majority of the world’s Mezcal supply is made here, and international law aims to keep it that way. Mexico’s dominance as a producer of Mezcal and of tequila, specifically, are both protected under NAFTA. More than 40 countries recognize Mexico as the world’s original producer of tequila; Israel and Japan have bilateral agreements with Mexico pertaining to tequila, and the European Union has legislation in place that protects Mexico’s status as a producer of the liquor.

Within Mexico, laws ensure only certain regions have the privilege of producing tequila. Jalisco is one of the few, along with Guanajuato, Michoacán, Nayarit and Tamaulipas. Not surprisingly, within Jalisco, the city of Tequila is the biggest producer of the liquor. The city’s red volcanic soil is well-suited to growing the blue agave plant, making it the perfect one-stop-shop for tequila production. More than 300 million blue agave plants are harvested from the region each year.

Tequila production dates back to the 16th century, with the first recorded instance occurring near the city of Tequila. It is thought to have originated when Spanish conquistadors ran out of the brandy they had brought with them and chose a spirit distilled from the agave plant as a substitute.

This beverage was likely based on a fermented agave-based drink called pulque, which was developed in pre-Columbian central Mexico. Taking its name from the city where it was born, tequila has the distinction of being North America’s first indigenous distilled spirit.

About 80 years later, an enterprising man named Don Pedro Sánchez de Tagle began mass producing the stuff. The first tequila factory was located in the modern-day territory of Jalisco. Another entrepreneur, Don Cenobio Sauza, was the first person to export tequila to the United States. His grandson is credited with branding Jalisco internationally as the sole source of “real” tequila. Though most well-known tequila brands have developed into multi-national corporations, many have remained family-owned businesses.

Because tequila is such an important product for Mexico, its quality is assured by regulation. For example, to qualify as tequila, blue agave liquor must be at least 35-50% alcohol. The country has more than 100 distilleries and produces over 900 brands of tequila. As of 2009, approximately 2,000 tequila brand names have been registered. Because there are so many tequila distilleries, each producing multiple brands, every bottle of tequila must bear a serial number indicating the distillery from which it was sourced.

There are five main types of tequila, each based on a unique method of production and aging. In addition to these types, tequilas can be divided into two categories based on the sugars it contains. The first kind, called “mixto,” includes at least 50% agave sugar in its production, mixed with other sugars such as fructose and glucose. The second, 100% agave, is made exclusively from the sugars occurring naturally in blue agave plants. 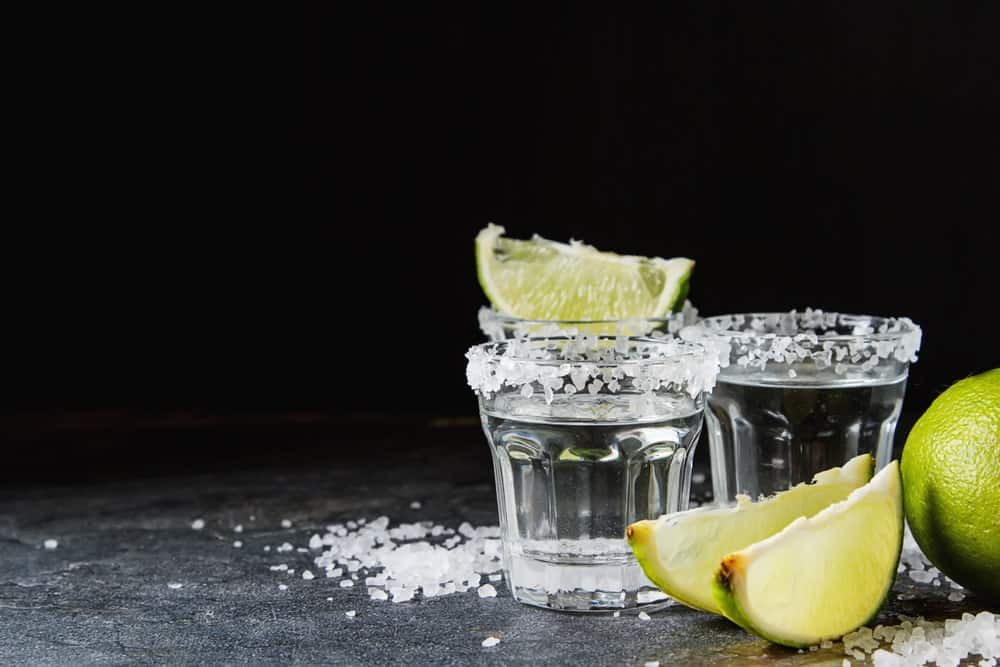 Blanco tequila is a clear white spirit, commonly known as “plata” or “silver” tequila. This type is usually not aged. Immediately after being distilled, it is bottled, packaged and sold. During production, some distillers will allow the liquor to settle or “finish” in stainless steel tanks for approximately 4 weeks before bottling it for sale. A few blanco tequila products are aged for 2 months, giving them a “suave” or smooth character, but these are rare.

Blanco tequila is known for having the truest flavors because it is served in its purest form. In blancos, the flavor of the blue agave plant is noticeable as it hasn’t aged in wood barrels. Distillers call this type “the essence of tequila.” 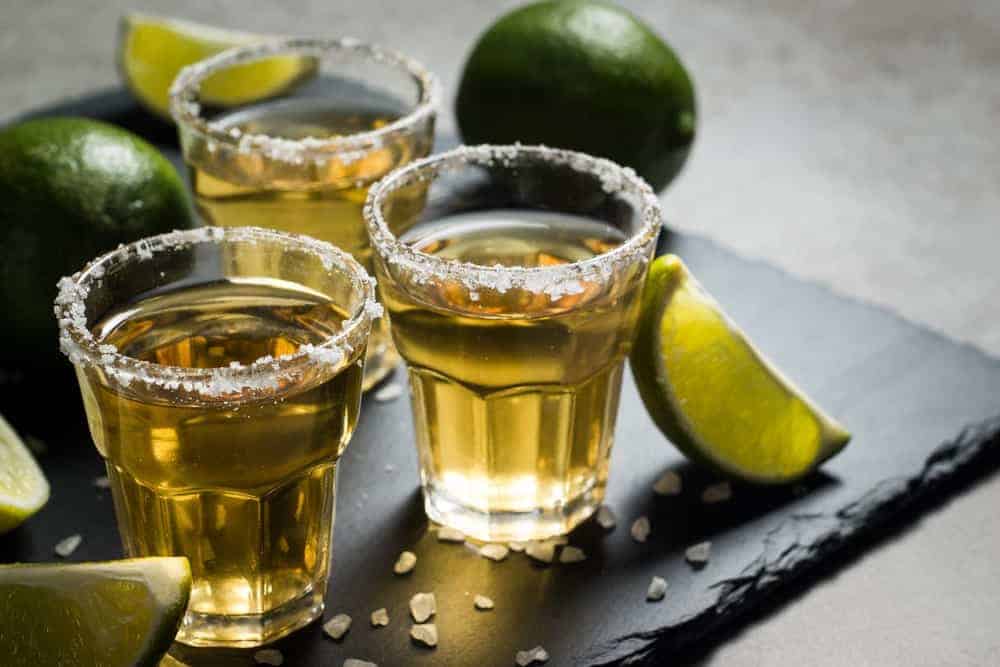 Named “young” in Spanish, joven tequila is also known as gold tequila because of its rich golden or light brown color. This color comes from flavoring agents such as sugar, oak tree extracts and glycerin, which are added to it during production. Caramel color is also added to some jovens. These extra flavors and colors are added immediately before the tequila is bottled.

Joven or gold tequila is produced by combining un-aged blanco tequila with aged or extra-aged tequilas. It isn’t as popular as other tequila types such as blanco, reposado and añejo. It is really designed to be served in mixed drinks like margaritas, rather than drunk straight for its taste. As such, it is one of the most affordable types of tequila. 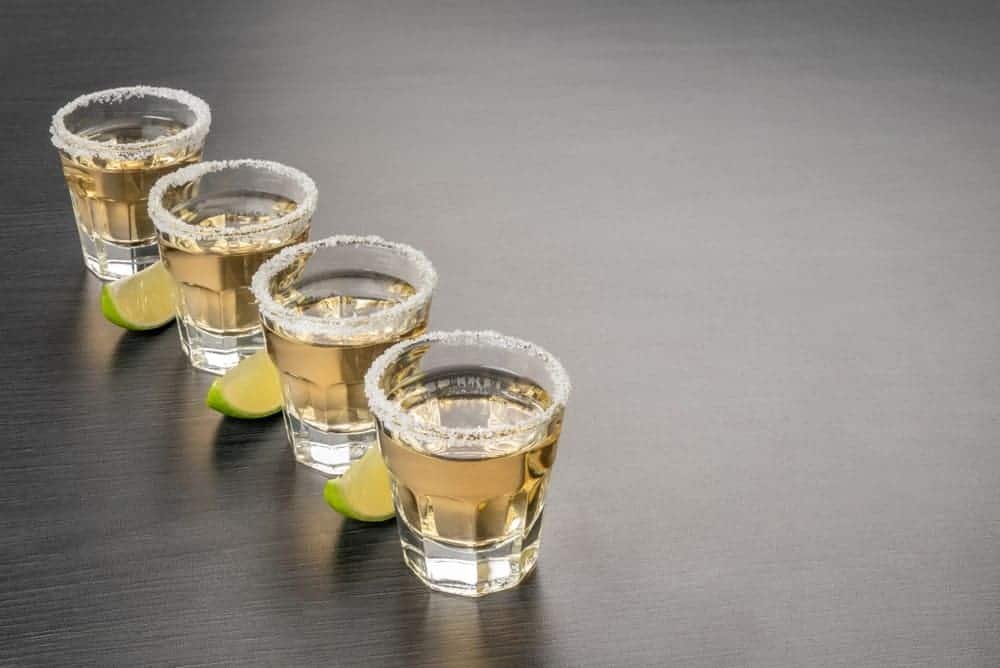 The name reposado translates as “rested” or “aged.”  This type of tequila is heavily regulated by the Mexican government, with strict production guidelines clearly laid out. To be classified as reposado, tequila must be aged in oak barrels for at least two months. At the same time, it cannot be aged longer than one year.

Reposado tequila is gold in color and usually aged in French oak or white oak barrels. The resins and tannins of the barrels dictate the flavor of the spirit eventually produced, with different types of wood lending different nuances to the taste. Barrels may have been used previously to age other spirits like whiskey, bourbon, cognac, or wine, all of which impact the taste of the tequila in different ways. 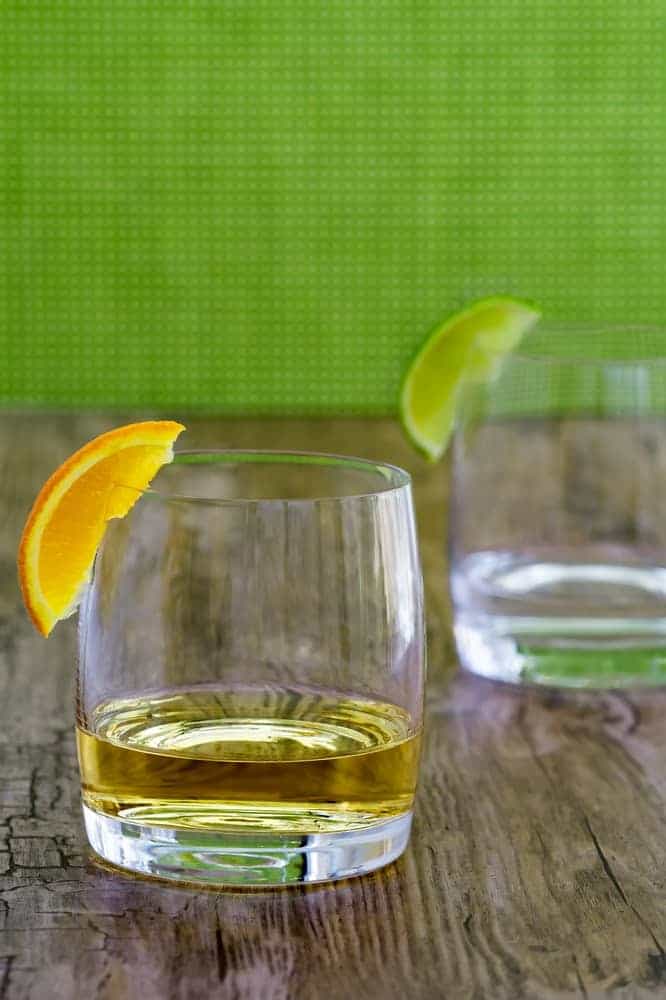 Añejo tequila takes its name from the Spanish word for “old.” It is made according to guidelines that state the liquor must be aged in oak barrels for a minimum of one year and a maximum of three. In addition, Mexican law dictates that, for tequila to be considered añejo, it must be aged in barrels that hold no more than 600 liters of fluid.

This type of tequila is usually aged in French oak casks, or whiskey or cognac barrels. Thanks to its longer aging process, it tends to be smoother, richer and more complex than reposado tequilas. Añejo’s color is a smooth amber that is slightly darker than reposado’s. Tequilas of this variety are also known as “vintage” tequilas.

Extra Añejo tequila is known as ultra-aged. It undergoes the same process distilling process as añejo tequila, and is aged in the same way – but for longer. In 2006, the Mexican government recognized this tequila as its own unique type and defined it as one that has been aged for more than three years. Following the aging process, the liquor’s alcohol content is diluted with distilled water. The color of dark mahogany, extra añejo tequila is the most expensive, and also the smoothest, type you can buy.

How to Serve Tequila 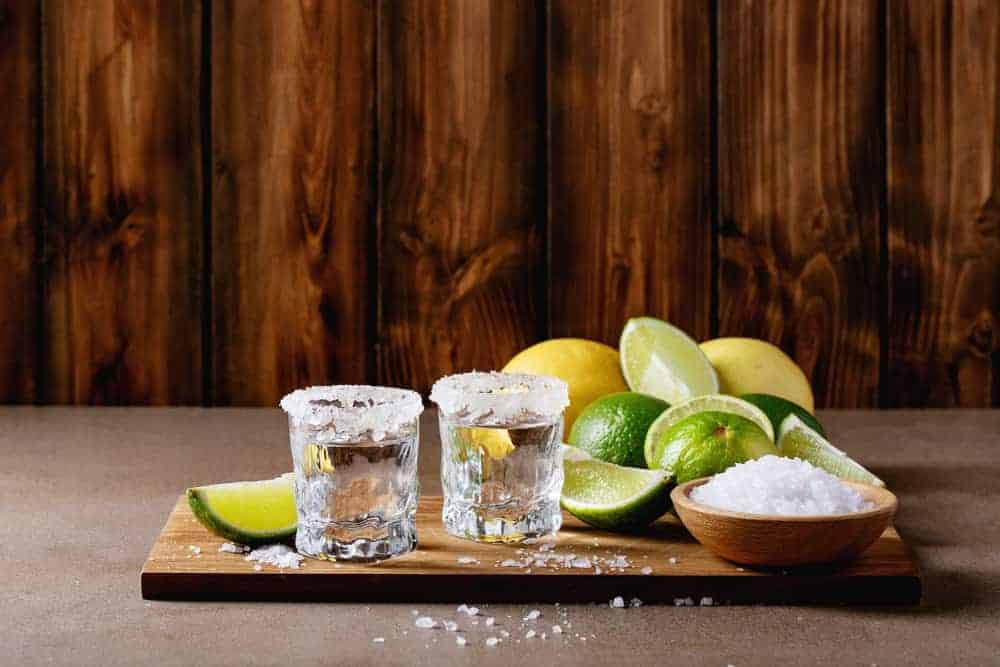 In Mexico, the traditional way to drink tequila is neat. Also, in some regions, fine tequila is served with a side of sangrita. Sangrita is a sour, sweet, and spicy drink made with grenadine, tomato juice, orange juice, and hot chili. Equal-sized shots of sangrita and tequila are sipped alternately, creating an interesting and pleasant balance of different tastes.

Bandera is another popular Mexican tequila drink. Named after the Mexican flag, it is served in three separate shot glasses. One is filled with lime juice (for the green color), one with white tequila, and one with sangrita (for the red color). Together, the glasses resemble the green, white and red banded flag.

Throughout the rest of the world, tequila is most often served with salt and a slice of lime. Drinking tequila this way is sometimes referred to as “lick-shoot-suck,” “lick-sip-suck,” or “training wheels.” It is also called tequila cruda. To drink tequila cruda, the drinker moistens the back of their hand by licking right below the index finger, then pours salt on the spot.

Next, they lick the salt from their hand, drink the tequila, and quickly bite the lime slice. This is often done by a group of people in unison. In some places, people drink what is known as a tequila slammer, which combines tequila with a carbonated drink.

The most popular chaser for tequila shots is lime, because it balances and enhances tequila’s flavor. Salt helps reduce the burn caused by the alcohol in tequila. Blanco tequila is usually only served with these accompaniments. However, in some countries, such as Germany, “oro” or gold tequila is consumed with cinnamon and an orange slice.

As a general rule, you can assume tequila is of the mixto variety unless its bottle bears a label saying it was produced with 100% blue agave. Some tequila manufacturers use labels that say “made with/from blue agave,” but read carefully because only those made completely from agave can be designated as 100% agave.

One advantage of 100% agave tequila is that it has little to no alcohol burn. Drinking this type of tequila with lime and salt is not recommended, as doing so will obscure its subtle flavors and fragrances. This type of tequila should be sipped from a snifter rather than a shot glass so it can be savored, rather than quickly gulped.

Certain lower-quality tequila brands recommend their products be served chilled, especially when consumed as a shot. This can make the product more palatable, as chilling helps mask its smell and flavor. 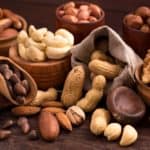 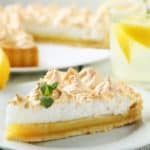