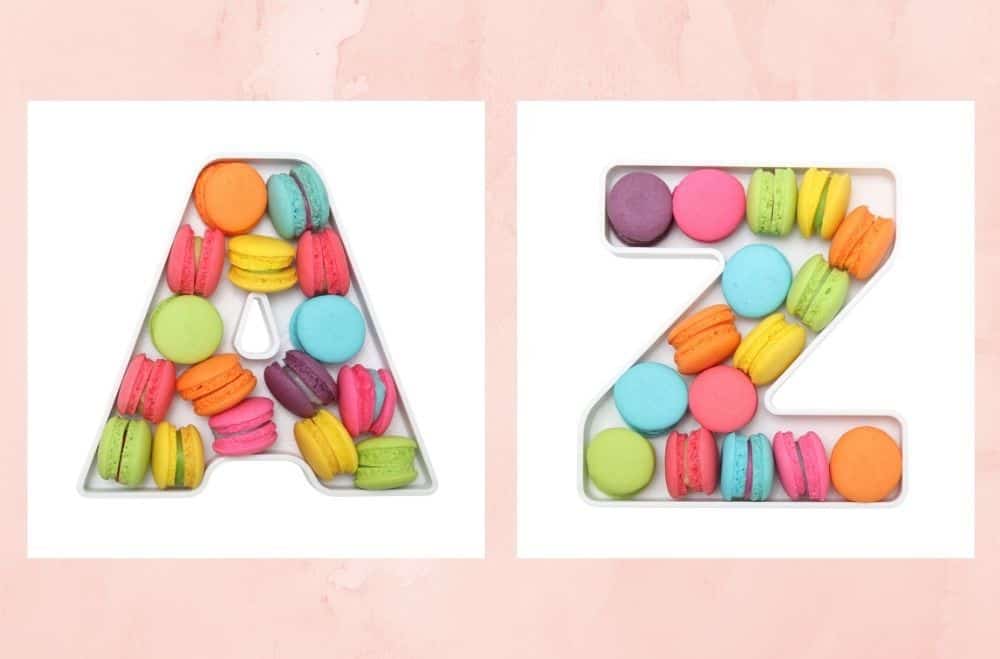 There are fun challenges out there to try and list as many foods as you can think of that start with a certain letter. There are also challenges that center around “cook the alphabet” or “eat the alphabet.” Food challenges like these are a blast because they make you think about foods in different ways. Plus, there’s always more to learn about the variety of foods eaten around the world!

Whether you’re participating in a fun food challenge, or looking to branch out and explore foods you may not have heard of before, here is a combined list of foods that start with the letter A and foods beginning with Z.

Foods That Start With “A”

Some of these will likely be familiar, and others may be new. You’ll find both ingredients as well as prepared dishes from around the world on this list.

Achiote Paste, also called annatto paste, is a flavorful paste with notes of smoky, earthy, sweet, and spicy flavors. It contains annatto seeds, coriander, oregano, cumin, cloves, pepper, and garlic. This paste is popular in Mexican, Central American, and Caribbean dishes and can be used as a marinade, meat rub, or sauce.

Acorn squash is a favorite in the squash family thanks to its mild, buttery flavor. Native people valued the ability to store acorn squash for a long time and cook it whole over a fire. The versatility of this squash allows it to be broiled, baked, steamed, roasted, stuffed and used in many different dishes and in many different ways.

Adzuki beans, also called mung beans, are small beans that grow in East Asia and the Himalayas. This legume is typically red, but can also be found in other colors such as white, gray, and black. Use adzuki beans in spicy chili, stews, soups, or served over rice with coconut.

Ahi Tuna is a food that starts with the letter A, and is the Hawaiian name that refers to both yellowfin and bigeye tuna. This tuna ranges in color from pink to deep red and has a mild flavor and firm texture that’s perfect for grilled and “blackened” dishes. It’s also ideal for raw fish dishes such as sushi, sashimi, and poke bowls.

These days, most people think of aioli as a flavored mayonnaise, which is understandable since both sauces use eggs and oil. However, true aioli originates in southern France and is a sauce made from garlic paste that’s whisked with olive oil, egg yolk, lemon juice, and mustard. In fact, the name “aioli” even means “garlic and oil.”

The sauce is used in the cuisine of the coastal areas of France, Spain, and Italy.

Albacore tuna, also known as longfin tuna, is actually one of the smaller fish in the tuna family and is known for its mild-flavored white meat. It’s found in the temperate and tropical waters around the globe and is commonly sold as canned tuna.

Alfalfa sprouts are the young, tender shoots of alfalfa seeds. The mature alfalfa plant isn’t used in cooking because the leaves are too bitter. However, the sprouts have a slightly crunchy texture and mild flavor with notes of nutty sweetness. Usually eaten raw, they make a great topping on salads.

All-purpose flour is a general flour that doesn’t contain any raising agent so that it can be used in many different ways. It also contains less gluten than bread flour so the dough isn’t as stretchy.

Fun fact: “All-purpose flour” is the name used most often in the US, while other parts of the world call it “plain flour.”

Contrary to the way the name sounds, allspice is not a blend. Instead, it’s the dried berries from the allspice tree native to Jamaica. Also known as ‘Jamaica pepper,’ the spice is frequently used in Latin American, Caribbean, and Middle Eastern cuisine. It’s a warm spice with a flavor reminiscent of cinnamon and cloves, that is used in both sweet and savory dishes.

Almonds are often referred to as nuts, but they’re actually the seeds of the fruit from the almond tree. They’re nutritious and packed with vitamins, minerals, fiber, and protein and make a filling snack or nice addition to many different dishes.

Amala is flour made with yams and cassava that’s native to the western parts of Nigeria.

Amaranth is a pseudocereal which means that similar to quinoa, it’s high in protein but not actually a grain. It would be easy to not realize that since it is often used as a grain in cooking. This starchy seed can be eaten in the same way you would eat rice or oats.

Anchovies are small school fish that are used in many different savory dishes all around the world. In the US, they have a strong flavor due to their curing process and are used in Caesar dressing. However, other global cuisines use them fresh to take advantage of their white flesh and naturally mild flavor.

Andouille is a smoked pork sausage that has its origins in France. The European versions tend to be less spicy than the US version. Andouille sausage contains cajun seasonings and stars in many Cajun-style dishes in the US, including jambalaya and gumbo.

The spice anise is the seed of the anise plant (Mediterranean parsley) and is used to lend a slight licorice flavor to drinks, sweets, and even medicine. This spice can be used as a whole seed or a ground powder.

Apples are juicy and crunchy fruit that can be eaten raw or used in sweet and savory dishes. They’re a very common food that starts with A and they contain many important vitamins and minerals. Whether you enjoy them as a snack, in a chutney, or as a dessert, “an apple a day keeps the doctor away!”

Apricots are a tasty fruit that is similar to a peach and enjoyed around the world. Whether you enjoy them fresh, dried, in a jam, or in other dishes, they lend a delicious fruity flavor you’ll love.

This Italian short-grain rice is a staple that makes a mean risotto and can also be used to make rice pudding, paella, soups, and other dishes.

Here’s a crazy fact: The artichoke is the immature flower bud of a variety of thistle plant that’s been cultivated as food! It’s classified as and used as a vegetable with a flavor that’s similar to (but a little nuttier than) asparagus and Brussels sprouts. It’s the star ingredient in one of the most popular veggie dip recipes.

This leafy green is popular in Italian cuisine and a favorite to use in salads. It’s part of the cabbage and mustard green family and has notable dark green, notched leaves that have a tender texture. The leaves feature a slightly peppery taste that pairs well with citrus flavors, different types of vinegar, and salty cheeses.

Asparagus is a green vegetable that grows in stalks and has a distinctive earthy flavor. It can be grilled, roasted, boiled, steamed, or fried and tastes great as a stand-alone side dish or in salads, pasta, stir-fries, and soups.

Europeans use the French word “aubergine,” while Americans call the same vegetable, “eggplant.” This versatile food is actually a fruit, although it’s thought of and used as a vegetable. In fact, aubergine has a texture and flavor similar to carbs and can be used as a meat substitute (ex: eggplant parmesan).

This is one of those foods that start with “A” that is familiar to people in the US since it’s the main ingredient in guacamole. This South American fruit has made a name for itself around the world but is heavily used in Mexican cuisine.

Were there any foods that start with the letter “A” on this list that were new to you? Now it’s time to cover foods at the end of the alphabet.

Foods That Start With “Z”

It might seem challenging at first to think of any foods beginning with “Z” off the top of your head, but there are plenty of delicious foods to choose from. Check out this selection. 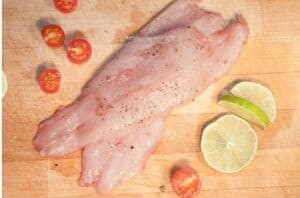 Zander is a light, delicate fish with few bones. It’s on restaurant menus in France and other areas of western Europe. This fish tastes great when grilled and pairs well with a variety of sauces and other flavors.

Za’atar is a mid-eastern spice blend that’s often used in Middle Eastern and Mediterranean cuisine. This flavorful, earthy, savory blend consists of thyme, sumac, sesame seeds, and salt, and pairs well with nearly everything from meat to veggies to carbs.

Zalzalak is a yellowish, pink fruit that grows in the Northwestern parts of Iran. This fruit has one of the more interesting-sounding names that start with “Z” on this list, and it translates to “hawthorn” in English.

No matter how you say the name, this fruit delivers a unique sweet and sour flavor to any dish.

Zapote is a small fruit with a tough, brown rind that peels away to expose bright orange flesh. With a flavor similar to fig and a texture similar to an avocado, it can be eaten fresh, added to pies or custards, or blended into a Central American beverage with milk, sugar, and ice.

Zest is the shavings of citrus rinds – usually lemon, orange, citron, or lime. Cooks add it to foods (both sweet and savory) to deliver a citrusy touch of sweet and sour flavor.

The eastern Australian zig-zag fruit has one of the most intriguing names for foods that start with “Z.” The fruit grows in rainforests and imparts a delicious sherbet-like flavor to sauces.

Zinfandel grapes are black-skinned grapes grown in California and commonly used to make wine. In fact, this variety of grapes is the same as a popular southern Italian variety called Primitivo, but it’s still a bit of a mystery how these grapes made it to California.

If you love flowers and want to use an edible variety, zinnias are the way to go. They’re easy to grow, vibrantly colored, and can be eaten raw or cooked. They can however have a bitter flavor, so they are best used as a beautiful garnish.

This popular pasta shape is used in Italian cuisine. It has a similar size and shape to penne but has smooth sides and ends that are cut straight instead of at an angle and taste delicious covered in sauce. 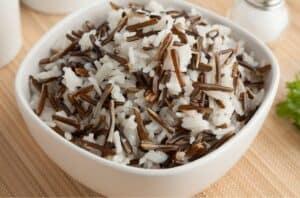 Zizania is the name of three species of wild rice that are native to the United States and another species that’s native to Asia. The plant grows in shallow water. It’s similar to other rice except the grain has a tougher outer sheath.

Ziziphus is a tropical juicy fruit in south-east Asia. Its oblong shape and red or yellow-brown color make it very distinctive. People enjoy its very sweet flavor that’s reminiscent of a date.

A common garden squash that grows well in most hardiness zones, zucchini has a tender flesh that pairs well with meat, other veggies, and many sauces. It can be used in similar ways to eggplant. 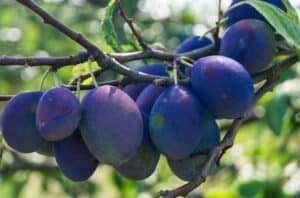 This fruit has one of my favorite names for foods that start with “Z!” It’s a type of rich and sweet plum that grows in Central Europe. This popular seasonal table fruit is also used to make prunes.

The world of possibilities is nearly endless when it comes to food! If you want to get creative with your culinary ventures (or trivia knowledge!), check out some of the new-to-you foods on this list of foods that start with A and foods that start with Z. You just may find a new favorite! 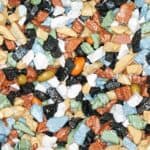 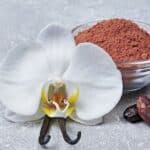