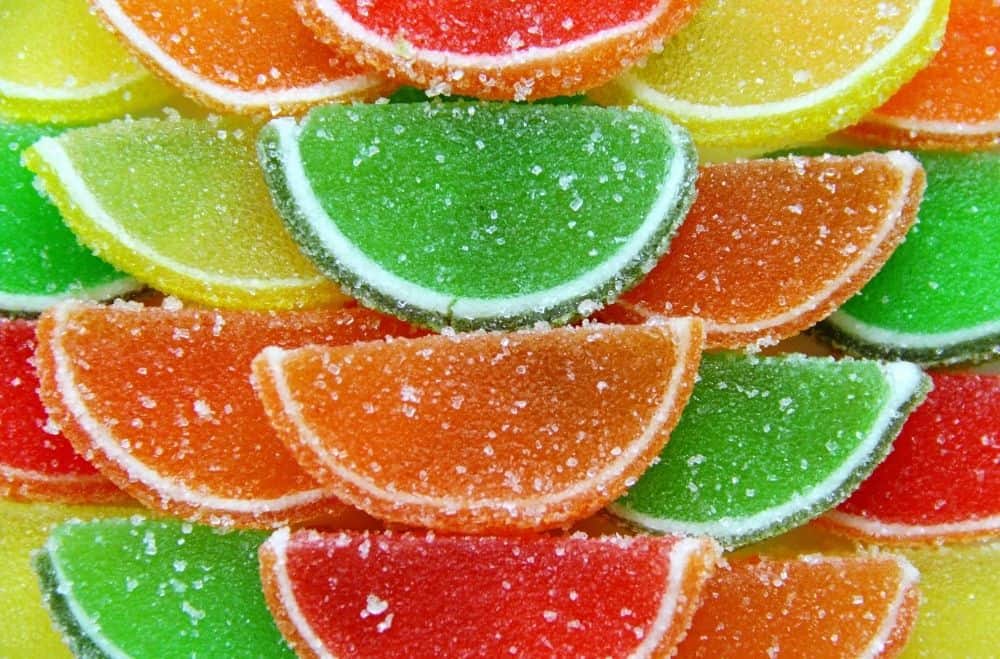 The next time you want to indulge your sweet tooth, reach for some fruit candy. While the options are seemingly endless, there are some that are just better than the rest…at least in my opinion as a candy connoisseur! I have put together a list of the top 10 fruit candy options you can find.

Who doesn’t enjoy a little candy now and then? Okay, I am sure there are a few people out there but for the most part, candy brings out the kid in all of us. Maybe it’s memories of going to the candy store as a kid, picking out your favorite sugary treats at the movie theater, or marveling at that huge Halloween stash.

No matter the reason why most of us enjoy a sweet candy treat from time to time. And today we’re dedicating an entire post to an often overlooked (but very yummy) candy segment: fruit candy.

If you take a look at the most popular candy in the US according to sales, chocolate candy tends to dominate the market. Move over Reese’s Peanut Butter Cups, Tootsie Rolls, and Hershey’s! It’s time to give credit where credit is due.

Chocolate candy may dominate commercials and rank as some of the best-selling candy in the world, but fruit candy dominates in its own way.

The Case For Fruit Candy

Chocolate may taste decadent and rich, but I would argue that fruit candy is superior in its own right. Here’s why.

Chocolate candy brands try to provide variety in both the flavors and selection, but by the very nature of the type of candy it is, chocolate just doesn’t have the range of flavor variety potential that fruit candy offers.

Fruit candy on the other hand has seemingly limitless potential! Just look at some of the flavor options: strawberry, cherry, lemon, watermelon, blue raspberry, sour apple, orange, and the list goes on and on. Chocolate just can’t compete with that.

If the sheer number of options of flavors isn’t enough to convince you, it’s time to factor in the ability to add in sour versions – oh that sweet and sour mix is irresistible!

There’s just something about those rainbow colors that draw you in, every time. That old adage of eating the rainbow might technically apply to fruits and veggies, but I see no reason why it can’t apply to candy too.

It’s all about texture. There are days when I want to suck on a piece of candy and savor it and other days when I want a jaw workout by chewing my candy. Fruit candy affords the option of doing either one or both on any given day.

Now here comes the fun part! Here are the most popular fruit candy brands available, and I even separated them by hard vs chewy.

For those days when you would prefer to savor your candy rather than get in your workout by chewing it, try these:

When you want a seriously long-lasting piece of candy to enjoy, reach for a Jolly Rancher. First debuting in 1949, this bold-flavored, fruity candy was originally produced just outside of Denver, Colorado.

Now, although Jolly Ranchers are made by the Hershey company, not much has changed. They are as popular as ever with about 7 million candies sold each year and still offer their original flavors. Jolly Ranchers have even expanded to offer cinnamon and sour flavors too.

Fun fact: The name “Jolly Rancher” was meant to convey the idea of a customer-friendly, western company.

Spree candy first made its appearance in the 1960s and became an instant classic. It originally was a hard fruit candy sold in rolls with a fruit-flavored shell covering its brightly colored candy. Now, Spree offers chewy candy as well. Chewy Spree still has its signature hard fruit candy shell, but the middle is a chewy, fruity center.

Fun Fact: An employee of the Sunline Candy Company, John Sprout, originally came up with the concept for Sprees. The candy was so successful that Nestle© bought the brand.

Skittles candy is one of the most popular fruit-flavored candy options on the market! First available in 1979, this must-have candy has a hard outer shell with a chewy center and comes in a beautiful rainbow of colors.

Their long-running slogan of “taste the rainbow” is highly appropriate as the intensity of their flavor is matched by their bright colors. Skittles may have started with 5 simple colors, but they have since expanded to include Skittles Wildberry, Sour, Brightside, Smoothies, Darkside, Tropical, and more.

Flavors: The original 5 (Strawberry, Orange, Lemon, Lime, and Grape) have expanded into many more.

Fun Fact: In 2009, Skittles changed their recipe so that there is no gelatin in them, making them vegan-friendly.

Don’t let their size fool you. These tiny, crunchy fruit candies pack one seriously delicious sweet and sour punch! Angelo Fraggos invented Nerds in 1983, and they are made by the Willy Wonka Candy Factory under the ownership of Nestle©.

These candies come in a box that contains two separate compartments, each compartment holding a different flavor. You can enjoy each flavor separately or mix them together for an explosion of flavor! When you put Nerds candy into your mouth, they taste sour at first and gradually become sweet for the ultimate sweet and sour experience.

Fun Fact: The candy’s name is rumored to be a reference to the Dr. Seuss Book If I Ran the Zoo. In that book, the narrator collects creatures called “nerds” for his zoo.

This candy was made famous by TikTok star 22-year-old Jaden Sprinz who has longer-than-normal incisors and makes videos of himself biting into different foods. One day he took some oversized jelly-filled candies and bit into one, gushing the candy jelly everywhere and igniting a sizzling hot, jelly fruit candy trend.

Ever since people have been rushing to get a bag of these jelly-filled candies. What started as a simple video has now gone viral and turned into a “Hit or Miss” game of biting into the jelly casing pops and seeing which way the trajectory takes the filling: into your mouth or into a pile of goop on the floor.

Fun Fact: This trend has depleted supplies and sent prices skyrocketing. A bag that was once $0.99 averages about $15 and can even cost up to $50 on eBay, if you can find one at all. Finding these fruit candies has become a challenge as they are on backorder from the manufacturer.

An instant classic since they first appeared in the 1920s, Gummy Bear candies will never go out of style! German candy maker Hans Riegel and his company HARIBO invented this sweet fruit gummy candy. It was originally available in five flavors: Lemon, Pineapple, Orange, Strawberry, and Raspberry.

Now HARIBO still makes these delicious chewy candies, but many other companies do as well, and they come in a variety of shapes – including worms!

Fun Fact: Gum arabic was the original base ingredient for this candy, and that’s where the “gummy” part of the name comes from!

Love sour? Sour Patch Kids offer the perfect blend of sweet and sour in an impressive achievement for an overachiever. As chewy as gummy bears, this treat delivers a face-puckering sour flavor followed by a satisfyingly sweet finish.

First available in Ontario, Canada in the late 1970s, this sour then sweet fruit candy brand was shaped as Martians to capitalize on the space exploration craze of the 1970s. In the 1980s the shape was changed to make the most of the popularity of Cabbage Patch Kids.

Flavors: The original flavors, Lime, Lemon, Orange, and Raspberry, are still available along with the addition of berry.

Fun Fact: There is now a large variety of Sour Patch Kids available, although some flavors on this list are only available in the UK: X-Treme Fruits, Berries, Peach, Sour Apple, Cherry, Xploders, Chillerz, Watermelon, Blue Raspberry, Bunnies, and Zombies.

Even if you don’t like seafood, it’s nearly impossible not to like Swedish Fish. Since first appearing in the 1950s, this fruit candy has remained an easily accessible favorite. Its cute fish shape as well as its sweet fruity flavor appeal to kids of all ages.

Fun Fact: The actual type of berry for the flavor is a bit of a mystery with some people saying raspberry and others guessing different types of berries. Although the exact flavor is a mystery, it’s rumored to be lingonberry.

Invented in 1960 in the UK, the original four flavors of what was then called Opal Fruits were Strawberry, Orange, Lemon, and Lime. When they came across the pond in 1967, they were called Starburst in the states. The UK candies didn’t get the name change until 1998.

The company expanded into making Starburst jelly beans in 1995, which have become another favorite of fruit candy fans. Likewise, their flavor options have expanded to include Watermelon, Tropical, Sour, Very Berry, Superfruit, and Summer Blast.

Flavors: The 4 classic flavors are Strawberry, Cherry, Lemon, and Orange.

Fun Fact: Pink has been voted the best flavor again and again. This is a fact that even the brand has acknowledged with the availability of the FaveREDS packaging that contains only Fruit Punch, Cherry, Strawberry, and Watermelon.

Of course, no list of the top fruit candies would be complete without classic Twizzlers candy. A simple, classic, deliciously old-fashioned candy that hasn’t lost its popularity since its introduction in 1929 by The Young & Smylie Confectionery Company.

Now owned by Hershey™, Twizzlers are not actually licorice but rather a licorice-type of chewy fruit candy. The strawberry flavor is by far the favorite flavor and makes up 70% of Twizzlers’ production. However, you can also enjoy Blue Raspberry, Watermelon, Orange, Lemonade, Grape, and several more flavors.

Flavors: More than 20 flavors are offered across the brand’s offerings, but strawberry is by far the most popular.

Fun Fact: Twizzlers licorice candy also has an extra fun secret skill. You can use it as a straw! Just nibble off both ends off and you’ve got a delicious, environmentally-friendly way to enjoy a soda or any other beverage.

Whether you prefer chocolate candy, fruity varieties, or both depending on your mood, there’s no doubt that fruit candy has a lot to offer in terms of fun colors, shapes, and flavors. What is your favorite fruit candy? 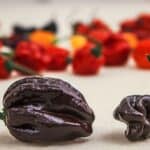 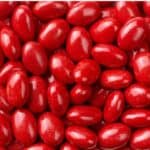