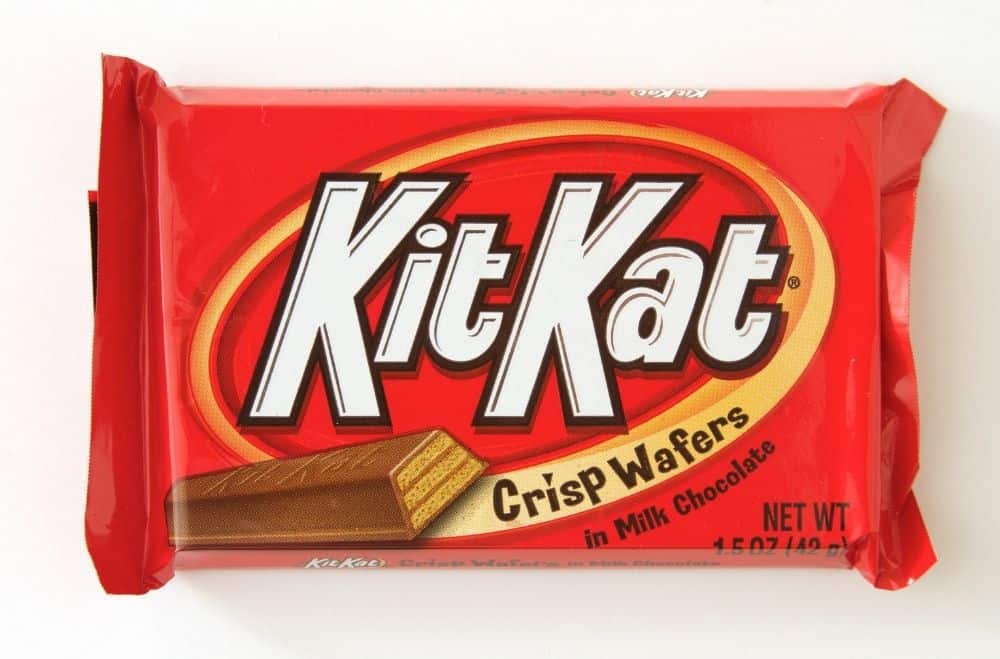 Kit Kats are popular chocolate candy bars in the US, with their simple design of crispy wafers and chocolate coating. But their popularity in the US is completely eclipsed by the popularity of Kit Kats in Japan.

Why are Japanese Kit Kats so popular? Let’s find out (hint: it might have something to do with the belief that they bring good luck). Plus, you’ll be amazed (and jealous!) at all the yummy Japanese Kit Kat flavors available too! Let’s talk about Kit Kats.

What is a Kit Kat?

Kit Kat is a candy bar brand that’s made with alternating layers of crispy wafers and rich delicious chocolate. Each package comes with either two or four long skinny “fingers” that are attached to each other by a thin layer of chocolate. The pieces can be snapped apart easily to separate each from each other so you can eat them.

A Brief History of Kit Kats

Chocolate-covered wafer candy bars, originally called Rowntree’s Chocolate Crisps, were first made by Rowntree’s of York in the United Kingdom starting in 1935. In 1937, the name was changed to Kit Kat Chocolate Crisp, which later got shortened to simply Kit Kat after World War II.

The first Kit Kats were crisp, four-fingered chocolate candy bars that were packaged and sold as a simple, unpretentious, workingman’s treat. Even the commercials for these candies featured factory workers, construction workers, and police officers taking a break from a mundane day to enjoy a sweet and uplifting treat. The slogan “Have a break…Have a Kit Kat” promoted this idea.

After selling successfully in the UK, Kit Kat ventured out in the 1940s and made its way to Canada, South Africa, Ireland, Australia, and New Zealand. In the 1970s, the brand expanded further into Europe, Japan, and the US.

1988 brought a big change when the Swiss company Nestlé bought Rowntree’s and took over producing Kit Kats ever since (except in the US where the candy is produced under license by the Hershey Company).

The Popularity of Kit Kats in Japan

Kit Kat first arrived in Japan in 1973 and quickly became one of its most popular chocolate brands. As the demand for Kit Kat grew, so did the demand for variety.

Nestlé began experimenting with and developing non-chocolate flavors to expand the variety of Japanese Kit Kats and increase sales.

The first of these flavors, strawberry, hit the market in 2000 and saw huge success. The Japanese love strawberry-flavored desserts, so this was a logical first choice. This dessert was even tinted pink thanks to the inclusion of dehydrated strawberry juice in the chocolate! The instant popularity of this flavor demanded the development of more Japanese Kit Kat flavors.

Since then, more than 350 flavors have been created, many of them only available in Japan or only in certain parts of the country. The limited availability of many flavors makes them more rare and prized.

As the Japanese love unique and novel items, this clever marketing strategy has paid off in spades for Nestlé, helping Kit Kat to reach even a cult-like status in the country.

The Cult-like Status of Kit Kats in Japan

To give you some idea of just how big Kit Kats are in Japan, this popular candy bar is available in the US in most grocery stores and drugstores.

However, in Japan, Kit Kat is so popular that people can buy them in drugstores as well as department stores and even high-end Kit Kat-devoted boutique candy stores. In addition, the offerings are constantly changing both in flavors and colors, with the majority of these being limited-edition flavors.

The limited offerings along with the belief that they’re good luck have made Kit Kats one of the top-selling chocolate brands in Japan.

Why Kit Kats in Japan are Considered Good Luck

Why are these candy bars so popular in the first place? Are they really that tasty?

Of course, they’re delicious! However, the Japanese consider Kit Kat bars to be good luck, and that’s really the main driving force behind the brand’s popularity. But why are they good luck?

As it turns out, the reason happens to be a “lucky” (pun intended!) coincidence of translating the name “Kit Kat” into Japanese.

“Kit Kat” translates into Japanese as “Kitto Katto” which sounds very similar to the phrase that people often use to mean something similar to the English equivalent of “good luck. “Kitto Katsu” is a common phrase that parents and teachers say to students before exams because it translates into several encouraging phrases, including “you will be sure to win” and “never fail”.

With meanings like that, how could you not love a Kit Kat in Japan?

That’s exactly the approach the Japanese Kit Kat brand took as it began promoting itself as a sort of good luck charm! In a stroke of marketing genius, Nestlé Japan took advantage of the unique marketing opportunity and ran with it.

The company even went so far as to package Kit Kat bars with encouraging phrases like “believe in yourself” as well as special packaging that appeals to the Japanese culture of gift-giving.

The strategies have paid off.

Parents now give Kit Kats to their students who are about to take their entrance exams. The practice has even extended beyond the classroom to the point where people now give Kit Kats to friends along with a handwritten note to express support and encouragement for other endeavors!

The packaging and limited-edition marketing also appeals to the country’s tradition of omiyage, which involves bringing home special presents for friends and family when returning from a trip. People buy gift-packaged regionally-offered Kit Kats in boutiques, airports, and train stations to give to friends and loved ones when they get home.

Fun fact: the marketing strategies are so well-tailored to the culture that there are people who believe Kit Kats are a Japanese product!

Does the candy’s popularity in Japan all make sense now?

Kit Kats may have started in the UK, but they now sell in more than 100 countries around the world. Beginning in 1996, Nestlé began creating flavor variants of Kit Kats with the introduction of Kit Kat Orange in the UK. Other flavors such as Mint, Dark, and Caramel soon followed.

Now there are many flavor variants of Kit Kat available all around the world, with (by far) the greatest variety of flavors existing only in Japan.

In fact, each year there are roughly 40 flavors available in different parts of the country: that includes around 10 core flavors as well as 20+ limited-edition flavors – many of those only available regionally. And the flavors can be…interesting.

Nowhere else in the world can you find Kit Kat flavors that range from fruity to beverages, vegetables, and even baked goodies! It’s really no coincidence that the company sells many of the regional flavors during certain seasons throughout the year when the fruits and vegetables are in season.

The company doesn’t come up with all of these flavors on its own. Nope, it goes to the experts, enlisting the help of famous chefs. One such chef, for example, Takagi, created ultra-high-end bars made with higher-grade chocolates and ingredients. These versions are sold in boutique-like shops called Kit Kat Chocolatory stores.

It’s time to check out the flavors! In addition to the obvious milk chocolate flavor, here are some of the most popular – and some very unique – flavors of Kit Kats.

Note: You can buy some of these online, but many of them aren’t available for purchase outside of Japan or at most times during the year.

Fall is the season of apple pie, and this Halloween edition capitalizes on it. This flavor differs from other apple Kit Kat varieties to make it taste like you’re really eating apple pie. Yum.

Everything you love about your favorite citrus fruit in a sweet and sour flavor combo that makes this Kit Kat variety shine.

This flavor sounds like an odd combination but I can picture a slightly sweet, fruity cheesy flavor.

One of my favorite flavor combinations of all time. Mint Kit Kat is minty and chocolatey in all the right ways.

Take out the milk but keep the chocolate in this Kit Kat variety in Japan. It’s slightly less sweet, slightly more bitter, but just as delicious.

Here’s a unique flavor! When you want a kick of ginger reach for some Ginger Ale-flavored Japanese Kit Kats.

The most popular flavor in Japan, this variety features pink-tinted bars with strawberry-flavored cream.

Believe it or not, this was the top-selling flavor in 2010. This white chocolate variety has a mild, subtle flavor. Thankfully, you won’t be bowled over by ultra salty soy sauce chocolate!

A limited-edition flavor found around Shizuoka, where people have long cultivated wasabi plants with gnarly roots and heart-shaped leaves. The Wasabi Kit Kat uses wasabi-flavored white chocolate to cover the wafers and packs a “punch” that may make your eyes water!

Matcha Tiramisu is a well-known dessert in Kyoto, Japan. The wafers of this variety contain cream cheese and mascarpone cheese powders, and the chocolate contains green tea for a tastebud-tingling candy.

This popular flavor gets is inspired by coffee shop red bean toasted sandwiches available in the Nagoya area. It contains red bean-flavored cream and milk chocolate.

Kit Kat has recently released a new “Whole Wheat Flour Biscuit” line of bars. The company wants to appeal to the consumer who wants to make healthy choices and enjoy their treats too.

An interesting and wildly popular flavor that wraps banana-flavored chocolate around caramel and banana-infused wafers and cream.

Yes, you read that correctly. Never would I have ever thought to make veggie-flavored candy bars. Leave it to the Japanese for that kind of creativity. In addition to Baked Potato, other veggie flavors include Grilled Corn, Mashed Edamame, and Beet.

Yokohama Strawberry Cheesecake Kit Kats artfully combines cheese-flavored white chocolate wrapped around classic wafers and cream that’s infused with cheese and strawberry-flavored. If you enjoy cheesecake, this flavor has got everything you love.

This flavor is traditionally only available near Nagano, Japan. This variety features apple-flavored milk chocolate to highlight the popular Shinshu apple.

This flavor screams “cinnamon lover!” Cinnamon and chocolate meld together beautifully in a Japanese Kit Kat variety that is slightly less sweet than other flavors.

Flavored for the deep purple Okinawan sweet potatoes found near Okinawa and Kyushu.

Chili and chocolate are a terrific flavor combo. If you love heat, this is a must-have flavor. Tread carefully though, because the heat ramps up as an after-taste.

The Kit Kat Chocolatory produces this variety and considers it to be the “Cadillac” of Kit Kats. It’s handmade with the highest quality ingredients and the first to include toppings (chopped almonds and cranberries) as well as their top-of-the-line smooth sublime milk chocolate.

Interested in more interesting Japanese Kit Kat flavors? From butter to Kobe Pudding to Vegetable Juice and everything in between, you’re sure to find some unusual flavors of Kit Kats in Japan that you’ll love! Amazon has an amazing variety of Japanese Kit Kats. Enjoy! 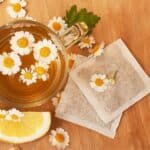 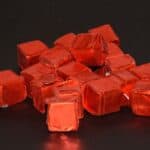