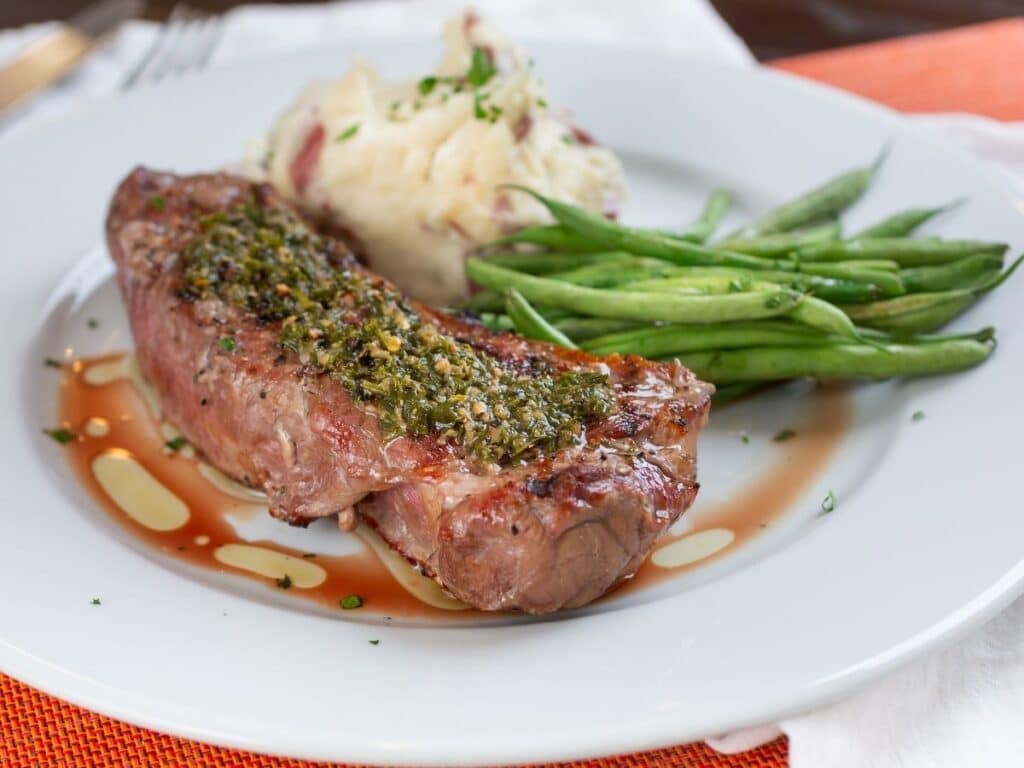 Love steak? If so, it’s so important to know how to make New York strip steak tender. Once you discover a few cooking tricks, you can turn otherwise tough cuts of beef into some of the most tender and juicy entrees imaginable.

Steak is one of the pricier types of meat protein – many people like to reserve it for special occasions. Once you discover how to cook it, you’ll fall in love with this juicy and flavorful meat. It has one of the best and fullest flavors and is one of the most-requested types of steaks from high-end restaurants.

In this guide, you’ll learn so much more than just how to make New York strip steak tender. You’ll get to know more about this cut of beef, including all the different ways to tenderize it, how to cook it, and what to do with leftover steak.

What is New York strip steak?

Why is it called New York strip? This is a really easy answer: it’s because that is where it originally came from.

This steak is cut from the back-middle part of the cow behind the ribs, also called the beef short loin subprimal. This part of the cow is also where the filet mignon comes from. After the butcher removes the tenderloin, the beef strip loin steaks remain.

New York strip steaks that have the bones in them are also known as T-Bone steaks and porterhouse steaks.

Here’s how to tell the difference between the types of steak:

All three types of steak are cut from the same place.

Honestly, New York strip steak can be of the most tender cuts of beef. The reason we want to look at how to tenderize it is because it is so much more enjoyable to bite into steak when it’s easier to chew.

If your New York strip steak is really difficult to chew and tough, then you might have overcooked it. For those times when you know you didn’t overcook the steak, I have some tips that will give you the most tender and juicy bites of steak that you have ever made.

Even though a New York strip steak is one of the most tender cuts of beef, it is still important to know how to tenderize it properly. When you figure this out, you’ll become a steak master, cooking the most awe-inducing entrees that everyone loves.

Since it is already so tender, you don’t have to do much to it. These are the most popular (and easiest) ways to tenderize New York strip steak.

Score Meat with a Knife

This is the easiest way to make New York strip steak tender. The steps are literally like it sounds. Gently use a sharp knife to cut lightly into the steak a few times. Do this, especially if you are marinating the steak, so that the marinade will soak into the meat.

Do not pierce the meat with a fork – this is a myth that people spread, thinking that the seasoning will penetrate the meat easier. If you stab it with a fork, the juices inside the meat will flow out, leaving you with a dryer steak. 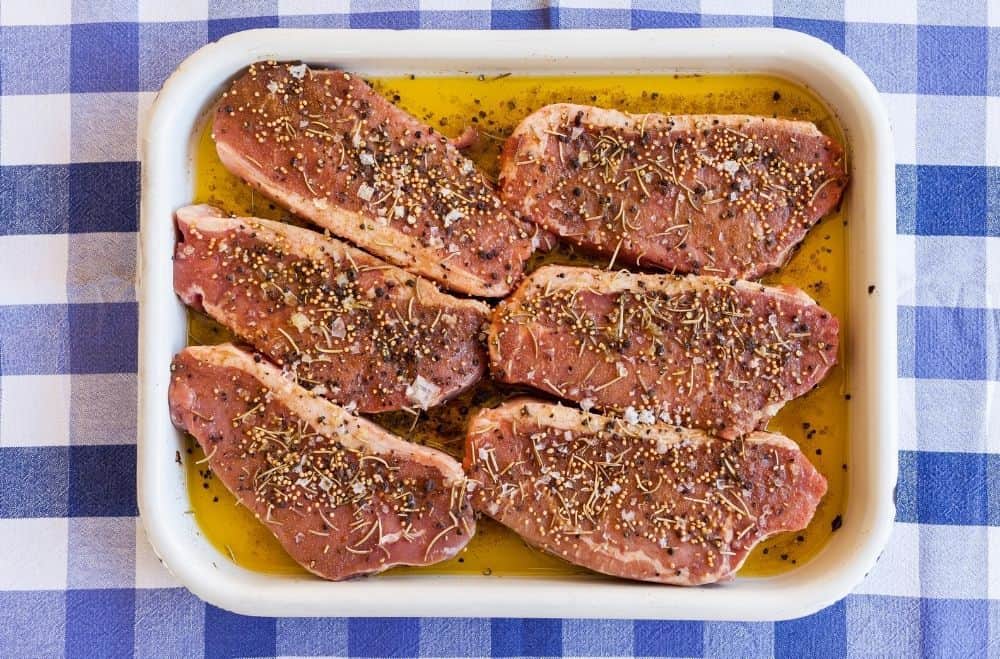 The acid in a marinade breaks down the tendons and naturally tenderizes the steak.

There are a lot of different steak marinades – look for one that has an acid in it, like vinegar or lemon juice.

After discovering your favorite marinade, this is how to cook marinated steak in the oven. The times will differ based on how thick your steak is, but the general rules still apply.

Pounding the steak actually has two advantages: It breaks down the toughness of the meat, making it easier to chew after you cook it. It also flattens the steak, which means it will cook faster on the grill or stove.

If you have an uneven cut of steak, then pound it so that it has a uniform thickness. This will help the entire steak cook at the same rate.

Be careful when you use salt on steak because it draws the water out of the meat. However, salt is a fantastic tenderizer because it breaks down the protein cells and makes it easier to chew.

Here’s how to use salt to tenderize NY strip steak.

How you cook your steak also affects how tough or tender it is. These are the best ways to cook a New York strip steak so that it is just as juicy and tender as you want it to be.

When you pan-fry the steak in a cast-iron skillet, it cooks in its own juices, which keeps the steak nice and juicy. The other benefit of a cast iron skillet is that you can transfer it to the oven to keep it warm while you keep cooking other parts of your dinner.

In this guide, you’ll learn how to cook a ribeye steak in a frying pan. It is full of helpful tips and the best spices to use on your steak to bring out the natural flavors.

Grilling NY strip steak is one of the most popular ways to cook it. When you grill the steak, make sure the heat is all the way up. It should be high enough to sear the steak and cook it quickly, leaving the inside medium-rare (or cooked to your liking).

Check out this guide to grilling porterhouse steaks. I share all my best tips, including my favorite spices and cooking temperatures.

I know for a fact that when you cook steak slowly at low heat, it makes the meat extra tender. It will fall apart on your fork.

Cooking steak in the oven is my second-favorite way to cook a New York strip steak. The steak will sit in its juices, which helps it retain all its natural flavors.

The temperature of your steak will depend on how you like it cooked. If you want a medium-rare steak, cook it until the internal temperature reaches 140 degrees F.

To cook your steak medium, keep cooking it until it reaches an internal temperature of 155 degrees F.

How you store your meat depends on whether you are storing leftovers or fresh meat.

To store fresh meat, either vacuum seal it or keep it in loose wrapping. Do not wrap your meat in plastic bags or plastic wrap – this will make your meat go bad faster. Vacuum-sealed meat will last one week in the refrigerator. Meat in loose wrapping will stay fresh for 5 days.

Store leftover cooked steak in an airtight food storage container for no longer than two days.

To freeze your steak:

First, cut it into strips or cubes, or leave it in steaks – you’ll want to prepare it to be ready for how you plan to use it. Then, wrap the steak in moisture-proof plastic wrap, sealing out as much air as possible. This will prevent freezer burn.

After it is wrapped, place your steak in a resealable freezer-safe food storage bag. Keep it in the freezer for no more than six months.

What to Do with Leftover New York Strip Steak

If you have leftover steak, it is totally fine to keep it in the refrigerator and eat it as leftovers. So here’s how to reheat steak without it turning into a tough lump of meat.

A good way to use leftover steak is to cut it into strips and use it in fajitas. You can also chop it up into small pieces and spread it on top of chopped lettuce for a steak salad.

Below are some questions people often ask about making New York strip steak tender. If you don’t see your question below, please leave it in the comments.

What is the best way to tenderize a New York strip steak?

The best way to tenderize a New York strip steak is to marinate it. This breaks down the protein cells while also infusing the meat with flavor and spices (and more juices).

Does NY strip steak need to be tenderized?

No, New York strip steak doesn’t really need to be tenderized, as long as you cook it correctly. This is already a very juicy and tender cut of beef. As long as you don’t overcook it, it should come out perfectly every single time.

Why do chefs put butter on steak?

You might see chefs at steakhouses serve you a steak with some butter on top. They do this because it adds a rich flavor to the meat and softens the charred exterior, making the steak more tender.

What oil do you use for steak?

When you cook your steak, use an oil that doesn’t have a strong flavor. Vegetable oil, canola oil, and peanut oil are the most popular types to use for steak because they have a neutral flavor. You can use them on a super-hot grill without affecting the flavor.

Is the New York strip better than sirloin?

A New York Strip steak costs more than a top sirloin steak. This is because it comes from a part of the sirloin that doesn’t get a lot of exercise, so it is more tender than sirloin and has more flavor.

New York strip steak also has more marbling, making it a juicier beef cut. However, sirloin is leaner – which many people want.

Trying to pick out which one is better depends on personal preference. For example, do you care about the price? Taste? Fat content? There are so many elements to different types of steaks.

If you are looking at price and leanness, then sirloin is actually better than the New York strip.

Can you cook NY strip steak in the air fryer?

Yes, you can cook New York strip steak in both the air fryer and a convection oven, but this is my least favorite way to cook it. This method pulls the juices away from the steak, which makes it tougher. I love a nice juicy steak, and the air fryer doesn’t give you a juicy steak. It dries it out.

If you enjoyed learning how to make New York strip more tender, then here are some more fantastic resources about cooking steak. 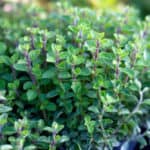